With only one week to go until WrestleMania, the stakes are pretty high right now for WWE to make every minute of SmackDown count in building towards their biggest show of the year, which I don't have to remind you that the company has promised to be "the most stupendous WrestleMania ever!"  So after this week's episode of SmackDown on Fox, does next week's show in Dallas look significantly more stupendous?  Let's take a look.

We open with WWE Champion Brock Lesnar doing an interview outside Universal Champion Roman Reigns' locker room, where he says WWE management told him he's not allowed to get physical with Reigns unless provoked, so he heads into Reigns' locker room to wait for him to provoke him.

Lesnar makes himself at home inside, eating some of Reigns' fruit and smashing his coffee table.  Lesnar just continues to be very entertaining in this role as "Cowboy Brock" and really has found some great charisma as of late.

This one opens with all four men brawling, even though it's a singles match.  Once the other two clear out, they have a pretty slow, low-impact match.  Eventually, Jey and Boogs get into it at ringside and the distraction allows Nakamura to hit the Kinshasa for the pinfall.

We now go back to Reigns' room, where Lesnar is spitting champagne on the couch and smashing the bottle against the wall.

Next, we go to a backstage interview with Drew McIntyre, who takes joy in all of the destruction he's unleashed recently on Happy Corbin ahead of their match at WrestleMania.

.@DMcIntyreWWE has a message for Happy @BaronCorbinWWE ahead of #WrestleMania! #SmackDown pic.twitter.com/VtZ890Qzpp

We next go to a video package detailing Corbin's journey from sad bum to rich happy douche over the past year.

As Kofi enters, he informs Holland that he won't be facing him, but instead the returning Xavier Woods.

A very quick one here that ends in about a minute with an Inside Cradle by Woods.

We now go to a video from Reigns and Paul Heyman in a car, where they mock Lesnar and threaten him that he had better be out of Reigns' locker room by the time they get to SmackDown.

.@WWERomanReigns is NOT happy that @BrockLesnar has taken over his locker room.

The Head of the Table is on his way to #SmackDown! @HeymanHustle pic.twitter.com/XxjxCNdy0T

Ronda Rousey hits the ring now for another monotone and emotionless promo where she screws up the name of the title she's challenging for next week.  SmackDown Women's Champion Charlotte Flair appears on the Titan Tron and informs her that she won't be there tonight.  They threaten each other a bit and this is all just awful and boring.

Next, we go back to Reigns' locker room for another interview with Lesnar, where he says he's having fun in there and won't be leaving.

So there's some kind of screw-up here, as it was announced that Humberto was facing Ricochet and the graphics said it during the entrances, but then it turned out Angel was actually facing Ricochet.  Oh well…

They have a quick, fast-paced match here that ends abruptly when Humberto distracts Ricochet, which allows Angel to roll him up.

Ricochet doesn't like this and demands to face Humberto right now.  Ah, there it is.

Similar to the previous match, this one is quick and fast-paced.  Also similar is the ending filled with shenanigans, as Angel hides under the ring and grabs Ricochet's foot, leading to him being counted out.

Next, we go to a backstage interview with Sami Zayn, who takes joy in thinking of what he'll do to Johnny Knoxville at WrestleMania in their Anything Goes Match.

We then go to the SmackDown announce table, where Austin Theory runs up and smacks Pat McAfee, who then chases Theory backstage until he locks himself in Vince McMahon's office.

A pretty silly one here that I guess has no disqualification as numerous outside people get into the ring to fight mid-match?  Anyway, Banks makes Zelina tap to the Banks Statement.

We now see Reigns and Heyman arrive at the arena.

They next announce that the WrestleMania Andre The Giant Battle Royal will actually be held next week on SmackDown, thus making it pretty pointless.

NEXT FRIDAY on #SmackDown! pic.twitter.com/7OOUem7ITZ

And they also announce that also next week on SmackDown, Ricochet will defend the Intercontinental title against both Angel and Humberto in a Triple Threat Match.  Aw the poor IC title, remember when it was highly valued and was a big match or even a match at all on the WrestleMania card?

The Universal Champion heads out to the ring now with Paul Heyman at his side.  Reigns threatens Lesnar if he's still in his locker room.  We see Lesnar in the parking garage on the Titan Tron as he destroys Reigns' new SUV with a pickaxe.  Reigns laughs about it until Lesnar starts making his way out to the ring.

Lesnar enters through the crowd and as he grabs a steel chair and climbs the announce table, is surrounded by security.  Lesnar destroys them with the chair and runs Reigns out of the ring.  Lesnar keeps beating on the poor security guards with chairs and climbs the table again.  Reigns appears from backstage and promises that at WrestleMania, Lesnar will acknowledge him as SmackDown ends.

And that's that for a pretty pointless episode this week.  They just kind of repeated Lesnar's rampage from last week, while spinning their tires with virtually everything else.  They do know WrestleMania is next week, right? 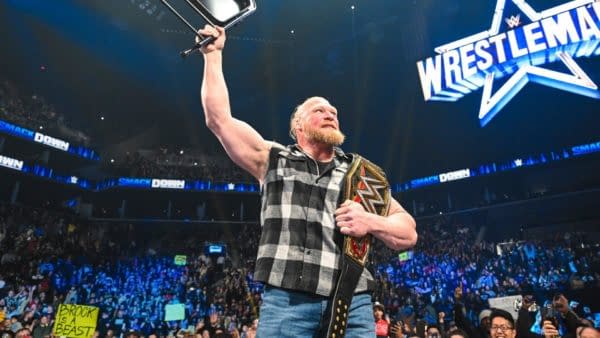 Review by Ryan Fassett
2/10
The Lesnar/Reigns stuff is pretty much the only thing with a pulse this week on SmackDown and that's not a good sign when WrestleMania is only a week away.