There is a distinctive and possibly naive idea behind the bloody conclusion that Eat The Rich #5 shows how far this series is willing to go. The intellectual conceit is both inevitable and surprising in its method of concluding this story, and it's an overall enjoyable experience.

Josephine "Joey" Dorsey followed her rich boyfriend Astor home to their parent's summer estate in Crestfall Bluffs to discover a number of unpleasant surprises involving indentured servitude, cannibalism, and the depravities of the moneyed class. Along the way, she rediscovers romance and sees her life in a way that will never allow her to be who she was before the summer. That means a bloody confrontation with everything in front of her that treats the last part of the book like the movie Malcolm X treated the experience of el-Hajj Malik El-Shabazz after he left the Nation of Islam.

Sarah Galley's script creates a disturbingly complex world of secret alliances and horror movie realities. The artwork from Pius Bak, Roman Titov, and Cardinal Rae depicts that with montage-minded specificity, outlining multiple points of this parade of atrocities. Then, in a very fast fashion, the creative team throws a wrecking ball at this elaborate Lego construction piece, creating a new reality for everyone involved.

From a "comics as wish fulfillment" standpoint, this is enormously satisfying, providing the kind of comeuppance we virtually never see in the public eye, seeing what happens to Astor's palace of privilege in a way that runaway senators or rampant hypocrites never seem to experience had a certain poetry to it.

However, if you scratch at the surface of it, the rationales don't seem to add up. The system worked the way it did because people bought into it and received benefits therein. The ideas here don't address that part of reality at all, instead of swooping in like Han and the Skywalker siblings without figuring out how it works after the big explosion(s). We all would hope things work out, but hope is not a plan or — as it were — a plot point.

This is not to say you, specifically, should not buy this book. You should; it's fun, it's engaging, its characters work well, and its overall arc totally fulfills the promise put forth. In the sentiments of that great philosopher Basil Exposition, just try to have fun and don't worry about the pesky details. RATING: BUY.

Eat The Rich #5
By Sarah Galley, Pius Bak
'TIL DEATH DO US PART! Astor finally proposes but the cost of marrying into the 1% is too terrible for Joey to even contemplate. Too bad saying no isn't an option if she wants to get out of Crestfall Bluffs in one piece! With the horrible truth fully revealed, can Joey escape a proposal much too rich for her blood, or will she get eaten alive by the secrets of the rich and powerful? 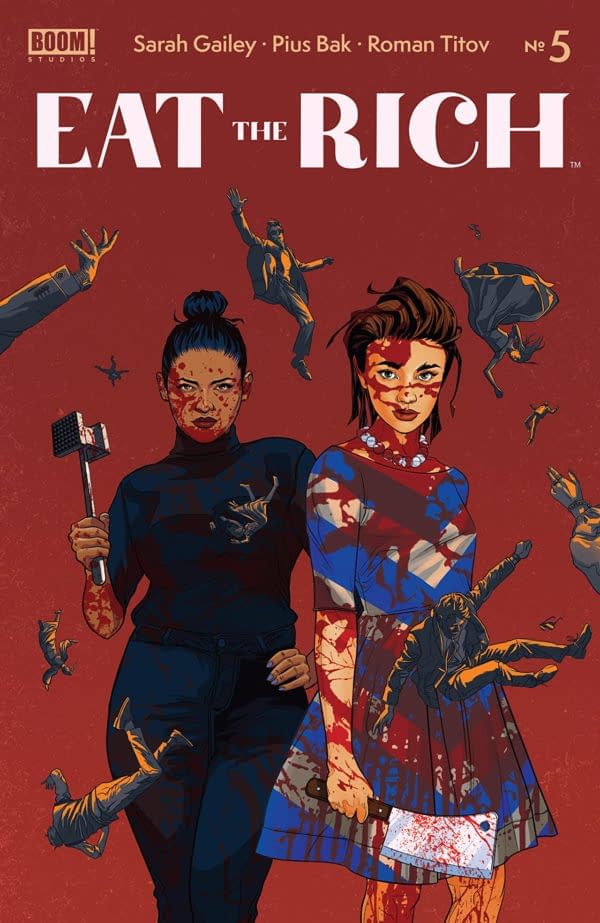 Review by Hannibal Tabu
8/10
Put on your bib and grab your utensils, it’s time to dig into a meaty finale on the tale of capitalism meeting cannibalism.
Credits
Editors
Eric Harburn, Elizabeth Brei, Ramiro Portnoy