Future State: Green Lantern #1 is a book that takes the term "future state" very seriously; things have gone outrageously wrong for the 7,200 members of the intergalactic law enforcement organization. In the very near future, the central power battery that gives the Green Lanterns their light … goes dark. Not for a few minutes, not for a few days … for decades, the power of the Green Lanterns is non-existent.

When it went down, a group of Lanterns led by John Stewart was in what's called "the Dark Sectors," lawless realms that were unable to be policed under even the best of circumstances. When the rings went dark, lawmen were stuck behind enemy lines with reprobates and murderers … for decades. That kind of thing changes people, G'nort and Jessica Cruz, most of all, and it is intense.

Writers Geoffrey Thorne and Ryan Cady, in particular, take a number of characters way out of their comfort zones with some very entertaining stories about people in crisis. John Stewart emerges as a seasoned veteran of military conflicts, poised to make things work no matter the cost. Jessica Cruz, formerly crippled by anxiety, goes full John McClane against threats that could easily end her.  Writer Ernie Altbacker takes Guy Gardner and casts him in an unexpected role as well, one with shades of Benjamin Sisko that was very unexpected.

The visuals presented by the disparate art teams likewise made an impression. Tom Raney, Mike Atiyeh, and Andworld Design created a reality of seemingly endless warfare against the Khunds (which is hardcore). Sami Basri, Hi-Fi, and Dave Sharpe took the claustrophobic confines of a GL space station in sector 0123 and made it into an action thriller. Clayton Henry, Marcelo Maiolo, and Steve Wands give guy Gardner an experience unlike any he has known.

The anthology-style of storytelling has been a mixed bag for some Future State titles, but this felt like a lot of story, tied together well by a central inciting incident, delivered by masters of the craft. RATING: BUY.

Future State Green Lantern #1
By Geoffrey Thorne, Ernie Altbacker, Ryan Cady, Clayton Henry, Tom Raney, Sami Basri
Assigned to map and contact new lifeforms past the 3,600 known sectors of space protected by the Green Lantern Corps, John Stewart and an elite team of Lanterns are trapped behind enemy lines and fighting for their lives when the Central Power Battery goes dark and leaves the entire corps defenseless. Meanwhile, across the cosmos, Green Lantern Jessica Cruz finds herself powerless and forced to battle the invading Yellow Lanterns of the Sinestro Corps, and Guy Gardner, trapped on distant world, decides to reopen Warriors Bar. 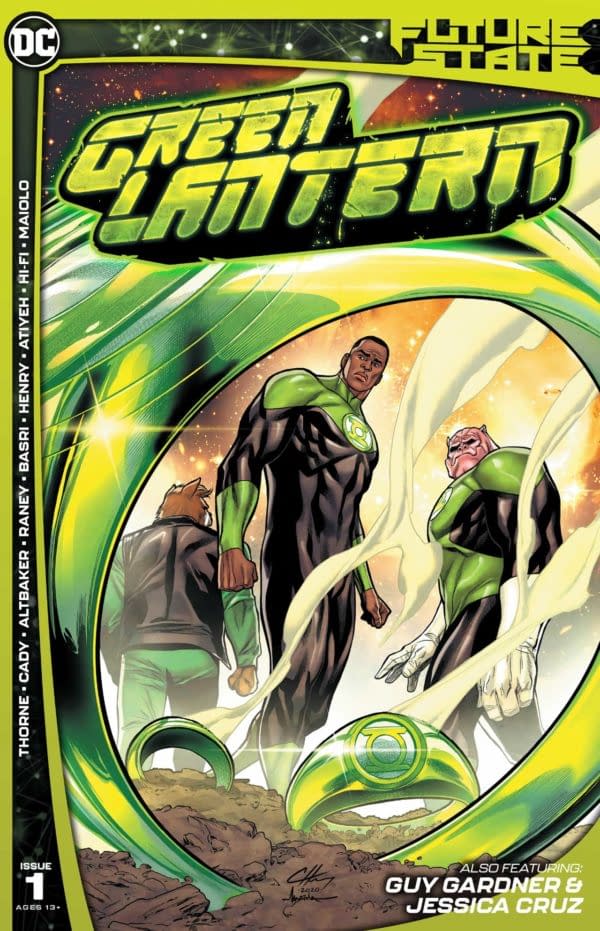 Review by Hannibal Tabu
8/10
The light has gone out for the Green Lantern Corps, and who they become in the darkness, how brightly they remain determined to shine, is a surprise to everyone.
Credits
G
G
M
M
A
A
M
M
D
D