Across the universe, the cosmic law enforcement group called the Green Lanterns are up against the wall as the source of their powers lies in ruins, and their leadership structure is unable to intervene. In Green Lantern #6, his means two of their numbers — fallen Earth cop Jo Muellin, now ambassador to the galaxy, and decorated Lantern leader and former Marine John Stewart, trapped in a strange part of the galaxy — need to learn new things to address the changes in front of them.

On the one hand: Muellin has to rein in Keli Quintela, the colloquially called "Teen Lantern," wearing an Oan-like power gauntlet that is a "supernova-class Oan weapon, roaming space uncontrolled." Quintela has it in her head that long-time Green Lantern adversary Sinestro is at fault for all the chaos, and she's heading to Korugar to give him and his entire fear-based Corps the business … creating a diplomatic disaster for Muellin.

In the place called Dark Sector 1, a seeming religious conversion has turned populations against unbelievers in unbelievably violent ways. Two ring-less Green Lanterns are trying to save a small population of dissenters, but time is running out. Quest Leader John Stewart has to find a way to save the day while "there's a bounty on Green Lanterns" that endangers their very lives, all while a surprise looms in his peripheral vision.

In very, very little space, writer Geoff Thorne tells a complete story about Jo Muellin and most of one about Stewart. That's no mean feat, fitting that much content into a scant 30 pages (which is beefy for a modern comic book). Likewise, the battle on New Korugar is a spectacular show of power with its own ticking clock for urgency, wonderfully depicted by Marco Santucci, Tom Raney, Mike Atiyeh, Simon Bowland.

Somehow, by taking away the very thing that gives the concept its luster, the work here has begun to shine even more brightly by making its stakes seem important. That's not easy, but it has ended up developing some of the most engaging superhero stories in the market. RATING: BUY

Green Lantern #6
Far Sector's Jo Mullein goes head-to-head with one-time Green Lantern Sinestro, now the leader of the Sinestro Corps that harnesses the yellow light of fear. But as Jo deals with Sinestro, Simon Baz finds out his former partner, Jessica Cruz, just joined the Yellow Lanterns as the Corps' newest member. Then, in deep space, Kilowog, who's been cut from the Corps, fights for his life in the Dark Sectors. But without a working ring, he may not stand much of a chance of survival. 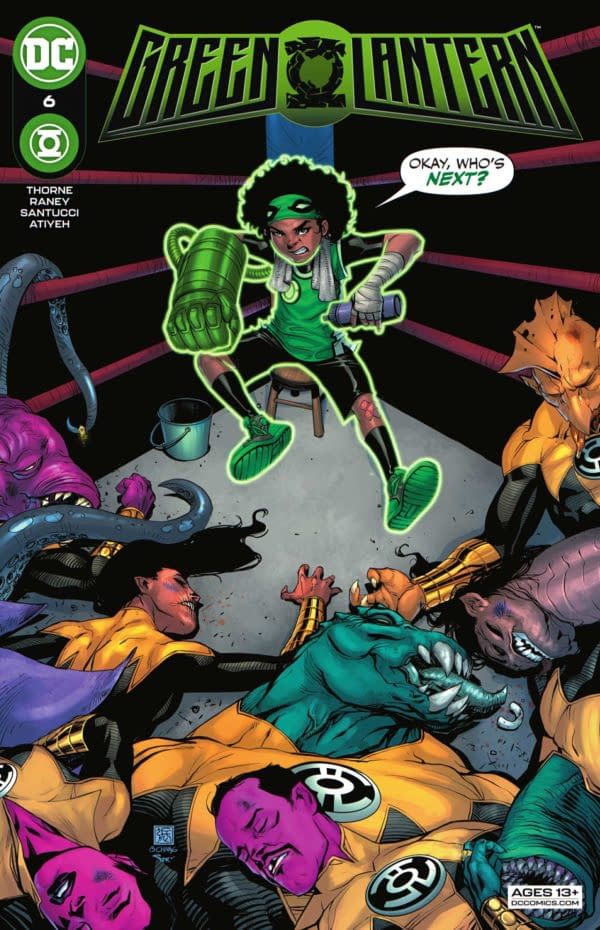 Review by Hannibal Tabu
8/10
Peril in deep space as the Green Lanterns are besieged on every side and desperate for ways to shine their light to create justice.
Credits
Editors
Mike Cotton, Bixie Mathieu