With a gigantic showing of spectacle, Guardians of the Galaxy #18 takes on planetary scale action. A sprawling cast approaches fighting something really big with an equally grandiose response, all to serve secret machinations. This book is high-octane storytelling that does a lot to entertain readers.

The headline is this: Dormammu has possessed Ego the Living Planet and created a body nearly the size of a solar system. Empowered by a hexagram that spans five planets, he intends to wipe out the planet Spartax and end its people forever. Unfortunately for him, the Guardians of the Galaxy are intensively creative and have a little help from their friends. There's a surprisingly effective bit between Richard Ryder and Peter Quill; a clutch assist from a top-rated franchise and some stellar action scenes that really connected in a big way.

This Al Ewing script pulls out all the stops, assembling a gigantic plan requiring more careful synchronicity than anything the cinematic Zemo pulled together and providing laughs, gasps, and directing the chaos like a master symphony conductor. The artwork from Juan Frigeri, Federico Blee, and Cory Petit has some very big challenges in presenting action at this scale. However, they manage to nail it while conveying all of the wonderfully engaging dialogue as well.

All around, Guardians of the Galaxy #18 is a very engaging book that delivers a thrill ride performance. RATING: BUY.

Guardians Of The Galaxy #18
By Al Ewing, Juan Frigeri
THE LAST ANNIHILATION CONCLUDES! The Guardians and their allies are being overrun on all fronts by the Mindless Armies of Dormammu. There's only one hope for the galaxy as we know it. ROCKET RACCOON has a plan. All he needs to know is Dormammu's weak spot. Dormammu doesn't have a weak spot. Uh-oh.

Guardians Of The Galaxy #18 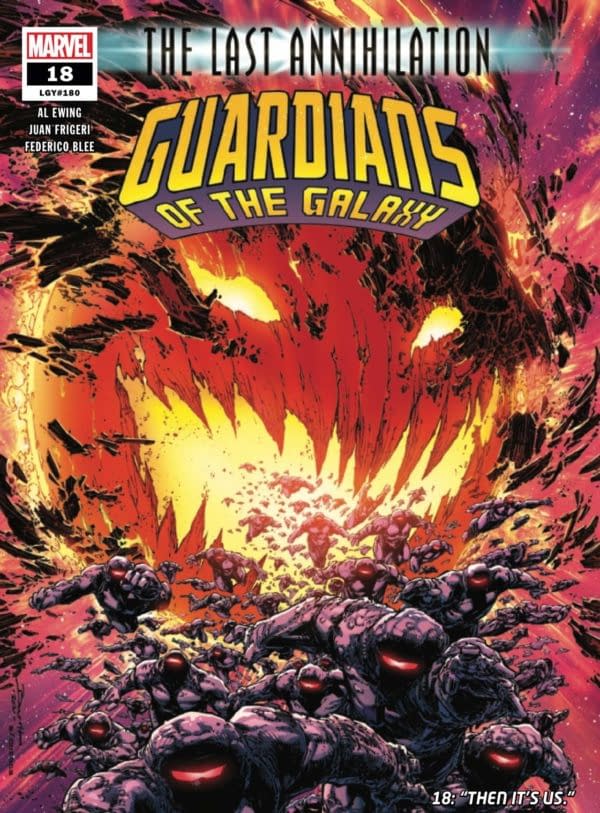 Review by Hannibal Tabu
8/10
Gigantic combat between planets with asteroid belts for bodies and a contentious group of heroes fighting each other as much as the enemy.
Credits
Editors
Akira Yoshida, Darren Shan, Kat Gregorowicz

The Nice House On The Lake #6 Review: Engaging

One of the most clever, most engaging books on the shelves steps it up a notch this month. The Nice House On The Lake #6 introduces everyone to The

In Superman: Son of Kal-El #5, an unexpected boost of power for Jonathan Kent has him zipping around the world and trying to do everything. Little does he