What kind of monster kidnaps a dog? The kind angling for a ten million dollar bounty on the head of Dick Grayson and Nightwing #87 delivers a thrill ride at making sure no animals were harmed in the making of this comic book.

Using the ancient art of continuous narrative, the equivalent of a tracking shot in filmmaking, this amazing artistic accomplishment of a comic book never takes its eye off the erstwhile boy wonder as he evades assassins and cavorts through splash pages in pursuit of canine justice. It would be fascinating to see the original Tom Taylor script for this. It follows so many wonderful moments happening while using the character's origins as a high-flying trapeze artist as a narrative framing device. The degree of difficulty on making that work is — in the words of K-2SO — very high, so you'll likely be holding your breath through most of this book, only using a fifth of your seat as well.

As noted, the heavy lifting visually is done on multiple levels. Bruno Redondo does the absolute most as he makes these still images kinetic and thrilling with a sense of motion. Adriano Lucas deftly depicts the transition from day to night so masterfully with color, realistically presenting the sense of time passing. Last but certainly not least, Wes Abbott knows that following this story in a linear fashion is also not easy and does amazing work with lettering to keep the reader's eye going the right way. His choice for the 1970s thriller vibe in the titles is worth noticing too. On top of all of those things to love about this issue, there are a lot of "little stories" happening as you go along that are worth seeing and would likely make Gene Ha beam with pride. On the title page, the painters tell so much story that Nightwing zooms past in the Bludhaven Hotel while cops obliviously arrest someone outside and a child and older adult share a moment of joy. A woman blissfully reads on her fire escape while gunfire erupts from a van going by, a van that makes a man spill a set of papers, a Breonna Taylor poster adorns a wall, and her clothes dry on a line. Then there's the bit with the motorcycle … there are so many times when this issue nails it, telling so many stories that you could pore over this issue for some time, discovering all its treasures.

True, this done-in-one doesn't address the core about the threat to Nightwing's life, but it takes you on a self-contained thrill ride that will continue to engage you past the first loop de loop. This is as good of a mission statement for this overarching storyline as anything else, and you don't wanna miss one thrilling second. RATING: BUY.

Nightwing #87
By Tom Taylor, Bruno Redondo
This special Nightwing issue is ONE CONTINUOUS IMAGE! That's right — if you placed every page next to each other, you'll have one poster image with this story! Now that billionaire Dick Grayson has publicly dedicated his funds to save Bludhaven, he's a wanted man — and that's why he finds hired killers breaking in to steal his dog, Haley! 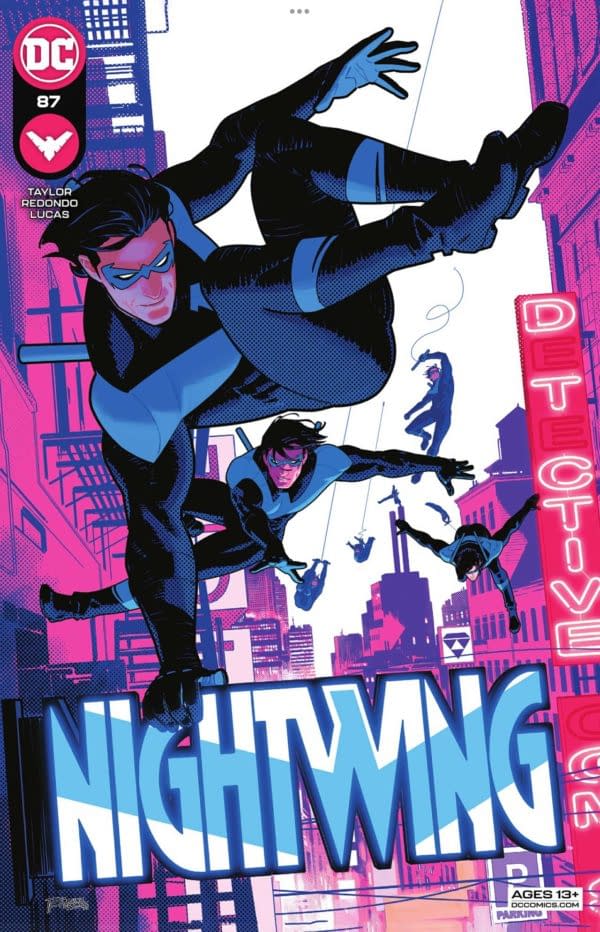 Review by Hannibal Tabu
8/10
With one continuous image, this creative team brilliantly uses the language of action to communicate the underlying rationales for this run.
Credits
Editors
Ben Abernathy, Jessica Chen