Finding a strange space between the Justice League International era and Alan Moore's Top Ten, One-Star Squadron #1 stumbles towards an odd balance between genuine moments of emotional connection and absurdist humor. The mix is not quite right, but this creative team knows their stuff and could find their footing shortly as Parks & Recreation did.

Heroes with commercial intent are not a new idea — from Luke Cage to the current run on Blue & Gold to The Power Company and more, there are a lot of examples of superheroes doing the job for a check. This issue, however, makes it much more of a job, with the trappings of office life and its oddities. If you saw the brilliant but too-soon-canceled Powerless, this will give you a dash of that with an odd mixture of the vibe of Hill Street Blues.

Red Tornado is the manager of Heroz4U, a truly haphazard collective of metahumans who have bills to pay. The lineup includes the Heckler, Plastic Man (who's barely seen), G.I. Robot, Minute Man, and more … basically, this is a group that Justice League Detroit or the Great Lake Avengers would call "losers." It's not that they don't have power on deck — Don Hall is back from the dead as Hawk & Dove do some security work at a pharmaceutical convention, and there's even Power Girl on staff. They just don't really give the reader much of a reason to get on board for what's going on … with one exception.

Through a failure of the social safety net, they pick up a stray called Gangbuster. After years of what looks like severe head traumas, his memory is a mess; he has enhanced strength and durability but an anger management problem, and no one is left in the world who cares for him. There's a simply heartbreaking scene involving him that indicates the challenges some people have with caring for others with special needs, and that's a subtly made point. That and the wonderfully designed sequence with Power Girl explaining her rationales shows off the enormous skill of Steve Lieber, Dave Stewart, and Dave Sharpe in doing a lot of storytelling with facial expressions, background elements, and savvy dialogue placement.

There are a number of things that could be confusing. Max Lord is a lauded and best-selling motivational author, which seems to not match the ultramax prison term he's been shown serving in Wonder Woman. Just a little while back, Power Girl was heading to a parallel earth and leaving her fortune to a teenaged genius who subsequently died — now Power Girl's back as a kind of grinning corporate weirdo. Black Condor (who might be the Ryan Kendall version) was likewise seen in a Black Lantern ring or otherwise being dead after Sinestro killed him in Infinite Crisis. All of these things are pretty much ignored, and that's fine in and of itself, but collectively can be a bit jarring. Also, does Red Tornado need to eat?

The result here is an uneven experience — humorous moments ("Are you in a flashback?") are too heavily interlaced with brow furrowing ones ("so we suffer alone") — but there is clearly something going on here. Time will tell whether it's something worth coming back to or something closer to Minute Man's customer rating on an app. RATING: HONORABLE MENTION.

One-Star Squadron #1
By Mark Russell, Steve Lieber
Who you gonna call? One-Star Squadron! Meet DC's superhero team where heroism meets capitalism. This ragtag group of heroes led by Red Tornado is here to provide service with a smile. All you must do is send a request via their on-demand hero app and they'll answer any call. Whether it's a children's birthday party or an alien invasion, no job is too small or too big! Brought to you by Eisner nominee Mark Russell (The Flintstones, Wonder Twins, Exit Stage Left: The Snagglepuss Chronicles) and Eisner winner Steve Lieber (Superman's Pal Jimmy Olsen), you'll want to invest early in this one-of-a-kind miniseries that promises a story filled with heart, heroism, and humor. 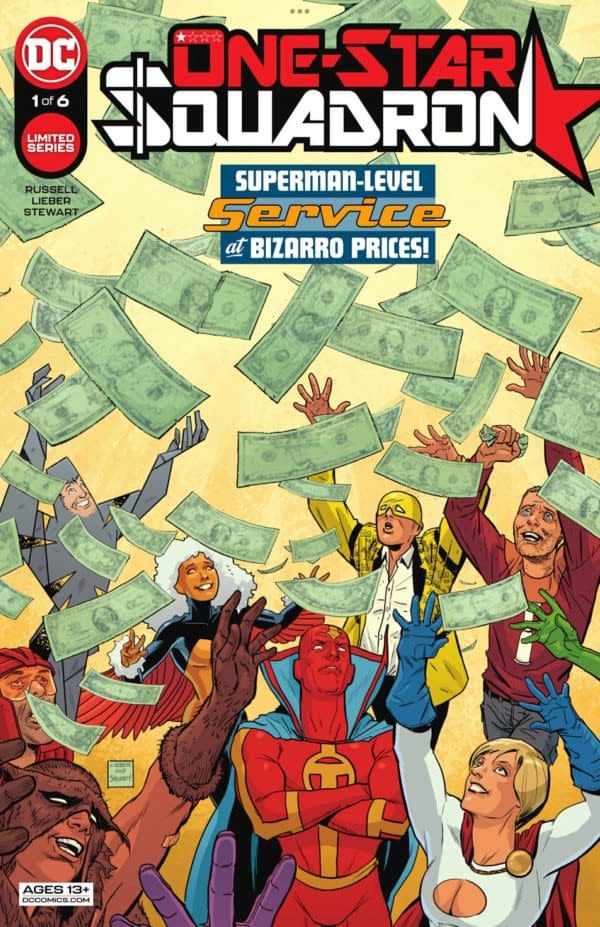 Review by Hannibal Tabu
7.5/10
A skilled group of creators turns in a mixed bag that may remind you of many other works but doesn’t quite nail the idea of what it’s going to be on its own.
Credits
Editors
Mike Cotton, Brittany Holzherr, Chris Rosa

Brenna Thummler's graphic novel Lights, has been scheduled for the 6th of September, 2023, from Oni Press.

Apocalypse Returns, Legion Vs Nimrod & 4 Sinisters in Before The Fall

Lazarus Planet is creating new superheroes and twisting existing ones, such as Firestorm, in tomorrows Legends Reborn from DC Comics.

Spider-Man and Misty Knight have trouble taking on an upgraded Scorpion in this preview of Miles Morales: Spider-Man #3, but maybe they just need the right tools for the job.

Looks like we will be seeing more of City Boy in Dawn Of DC in 2023, courtesy of of Lazarus Planet: Legends Reborn out tomorrow.