With a number of wonderful twists and turns to its intricate post-apocalyptic plot, this thrilling opening salvo posits a harrowing question of identity. How good is the message if you're not sure you can trust the messenger?

Two hundred and eighty-six years after a nuclear armageddon, a group of young people called Ranger Scouts follow a code laid down in a tattered old book they all treat as gospel. The ideas in it have their own challenges, of course, but that book has held together something resembling a decent society for centuries after the fall of the world we know. David Pepose's script develops both the rules of this book (and yes, the industry demands a companion standalone of that) and the characters of many of its players, including Dez (son of the Scoutmaster, who never lives up), superstar Kit (who would do better with less regard to cover up a secret) and more.

The visuals presented by Luca Casalanguida, Matt Milla, and Carlos M. Mangual show how terrifying this irradiated wasteland can be, bringing in some top notch action scenes and playing the plot twists with gasp inducing effectiveness. The whole package effectively synthesizes the power (and danger) of myth and how a false narrative can take on a life of its own.

This is a very pleasant surprise that comes out of nowhere and one that has much to offer in our challenging times. RATING: BUY.

Scout's Honor #1
By  David Pepose, Luca Casalanguida
Years after a nuclear apocalypse, a new society has risen from the ashes…and their bible is an old Ranger Scout manual. A young Ranger Scout named Kit has endured the harsh survivalist upbringing needed to conquer the irradiated Colorado Badlands. But after discovering a terrible secret once lost to history, Kit must risk everything on a dangerous quest to uncover the truth behind the Ranger Scouts' doctrine. From multiple Ringo Award-nominated writer David Pepose (Spencer & Locke, Going to the Chapel, The O.Z.) and artist Luca Casalanguida (James Bond, Lost Soldiers) comes a post-apocalyptic coming-of-age tale that proves when all you know is a lie, a Scout's Honor is the only way to move forward. 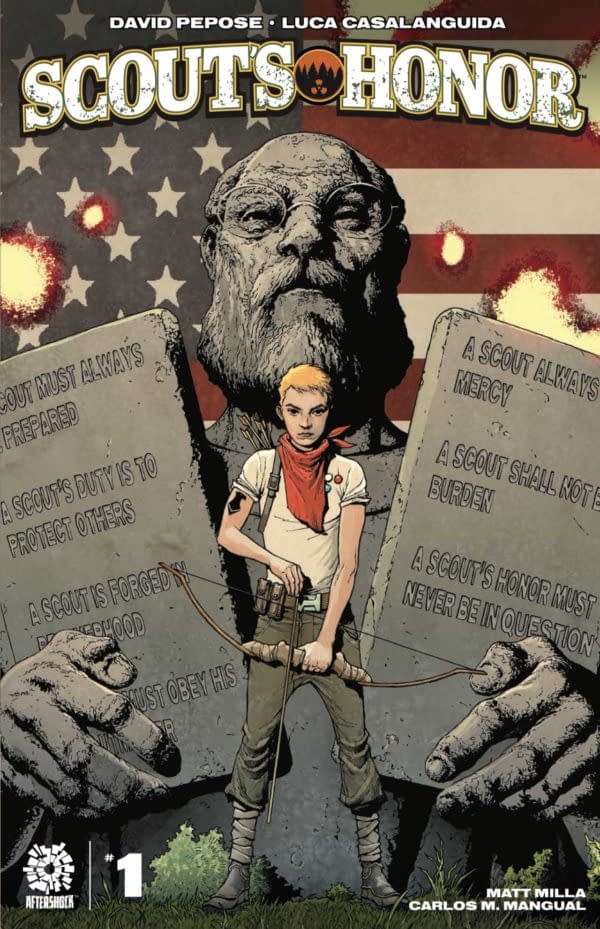 Review by Hannibal Tabu
8/10
The end of the world doesn't mean there's any time to let go of your values, and this new indie series asks questions that many might find hard to answer.
Credits
D
D
M
M
M
M
A
A

Someone targets a Bang Baby meetup as Static season two begins in this preview of Static: Shadows of Dakota #1.

Daredevil #8 Preview: In This Preview, Punisher… MUST DIE!

Daredevil and Punisher go head-to-head in this preview of Daredevil #8, and Matt plans to send Frank back to hell.