Despite the perception of the unified Empire sweeping across the galaxy with one mind and one purpose, everybody is on their own side in Star Wars: Darth Vader #17. This stellar issue gives you everything you need from the height of the Empire with some wonderful twists and turns using gems from canon along the way.

Darth Vader has a mission: he is after Luke Skywalker, who he knows is the lost son of his dead wife Padme, hidden from him by basically everybody. To accomplish that mission, he'll do almost anything, including roll up into an auction full of the galaxy's most dangerous criminals, steal a virtually priceless prize from them and dare anyone to say otherwise. For their own reasons — pride, ambition, fear, whatever — virtually everyone inside and outside of the Empire opposes Vader in this goal, even when some have to obey his will in the near term. That's not precisely true: these arrayed parties, who cannot join together for their own often selfish reasons, are against Vader specifically, so stopping his mission is part of that effort.

Greg Pak's script gives you everything you need here: epic Vader quotables ("Should you not first ask, what of Lord Vader?") and shows of magnificent Sith power, crafty lower powers scrambling to outmaneuver him, and even Palpatine clowning people on the giant hologram (when we saw that with Snoke, we should have known better — nobody else uses that gag). Then you get into the artwork — Raffaele Ienco, Alex Sinclair, and Joe Caramagna providing the visuals — which is as crisp and evocative as if it was rendered by Industrial Light & Magic itself, with breathtaking action scenes ("Absolutely") and magnificent shows of Imperial strength.

Star Wars: Darth Vader #17
By Greg Pak, Raffaele Ienco
'JUST REWARDS' Throughout the search for HAN SOLO, DARTH VADER has carved his way through shadows, unraveling mysteries cloaked in deceptions and betrayal. Now Vader finally takes care of all his business in this blockbuster conclusion to the WAR OF THE BOUNTY HUNTERS story arc. But is he the true master of betrayal in this tale? Or is there another? 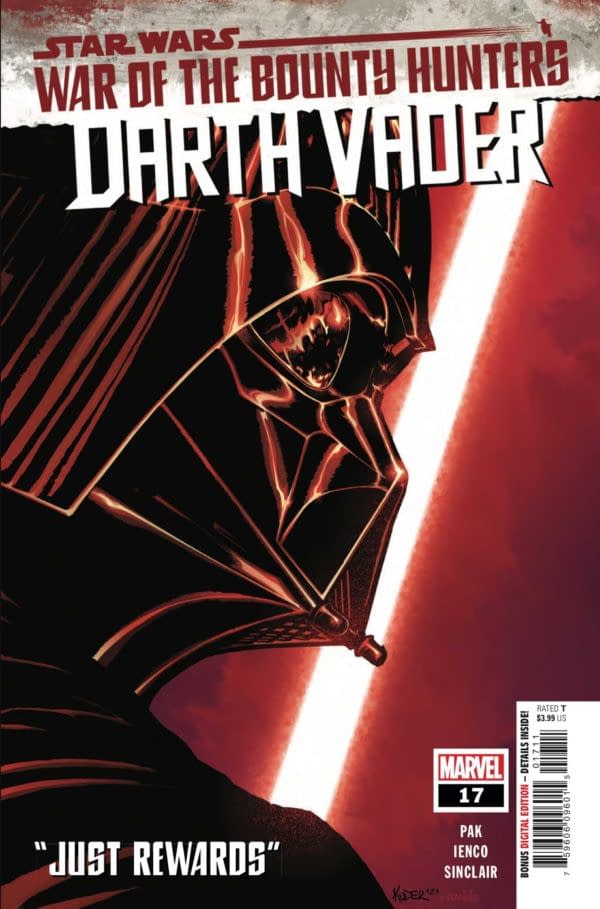 Review by Hannibal Tabu
8/10
Everything goes right as Vader overcomes, overpowers, and out quips everyone around, but so much is happening beneath the surface.
Credits
Editors
Akira Yoshida, Mark Paniccia, Danny Khazem