The Roadie #1 by Tim Seeley, Fran Galán, and El Torres is superficially similar to Paul Cornell and Tony Parker's 2015 comic This Damned Band, also published by Dark Horse. It's worth delineating the two comics quickly:

In This Damned Band, a band playing around with Satanic imagery for the attention is shocked to discover they've summoned demons (This Damned Band is presented in an interview style similar to The Office). In contrast, in The Roadie, the band is acutely aware of what they're summoning.

The Roadie #1's plot, briefly: A roadie for the metal band Mass Acre discovers he has a daughter and eventually chooses to save her. Along the way, there's a fun commentary about the excesses and provincialism of metal. (See a panel where two characters agree the hated Nirvana is still better than rap after complaining about Nirvana and grunge.)

On that same page, penciller and colorist Galán a draws scene set in winter, which manages to evoke the feeling with a minimal amount of actual snow. Galán's pages remind me of Babs Tarr's work. Or maybe the two artists have an influence in common. Regardless, Galán's work moves seamlessly between magic and reality. A demon visitation via an old TV is a highlight—no notes on Torres' letters, which read clearly.

Maybe The Roadie #1 is self-selecting? If you like demons, magic, and metal, you'll like The Roadie #1. Dark Horse hosts a five-page preview here.

From Tim Seeley (Hack/Slash, Revival) and Fran Galán (Lucky Devil) comes this horror saga about nostalgia, heavy metal music, hell, and redemption.
More than thirty-five years after his heyday, a former heavy metal roadie must return to the backroads of America to do a job he thought he'd retired from: exorcist. But this time, he's not saving groupies and drunk bassists. He's trying to save his daughter. 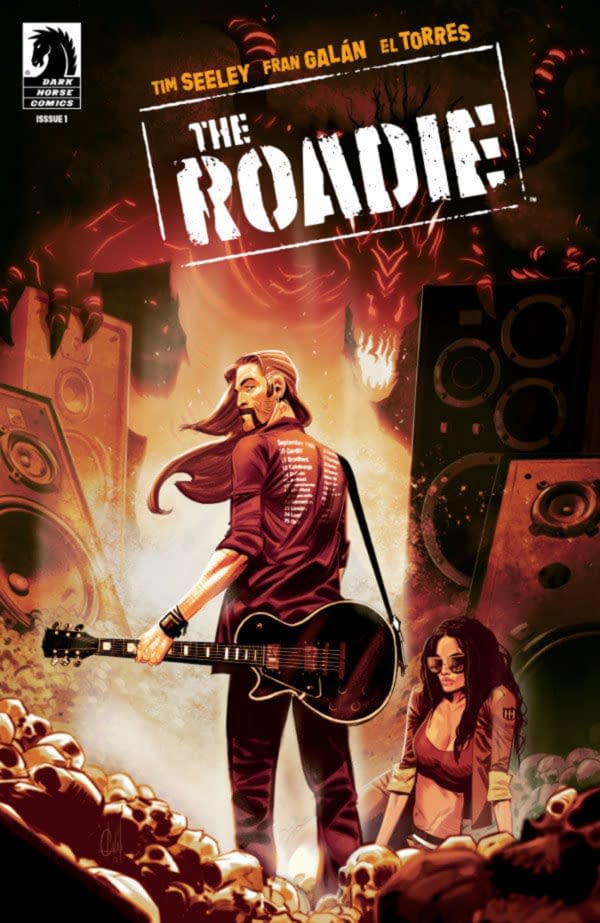 Review by James Hepplewhite
6/10
The Roadie #1’s plot, briefly: A roadie for the metal band Mass Acre discovers he has a daughter and eventually chooses to save her.
Credits
Writer
Tim Seeley
Artist/Colorist
Fran Galán
Letters
El Torres

Carmilla Review: Ancient But Not Decrepit

Orc Island is a delight. It follows a fairly classic adventure formula: a street urchin or sell-sword signs up for adventure with the promise of riches and gets more than they bargained for.

Vampirella Year One #1 Review: Does It Take Flight?

The Roadie #1 Review: The 80's Almost Killed Me

The Roadie #1’s plot, briefly: A roadie for the metal band Mass Acre discovers he has a daughter and eventually chooses to save her.