Today sees the publication of Thor #1 by Donny Cates (#13 on the power list) and Nic Klein, just after Cates put a lid on all his cosmic storylines in Guardians Of The Galaxy, only to then totally reopen them all, first in Absolute Carnage #5, Venom #21 and Incoming #1, with Knull on his way to Earth. And now Thor does all that as well. And again, causing Mark Waid much anguish and having to start on an update to the History of The Marvel Universe series again, alongside today's X-Men #4. In previous issues of Thor from decades past, we have learned of the origin of Galactus from the previous iteration of reality. And that an unknown radiation plague wiped out all sentient life in the previous cosmos, as it headed towards The Big Crunch.

The Star Plague. The Blight Storm. The Rot Buzzard. The Black Winter. Mark Waid could really have used all these. And it's back…

And as Bleeding Cool predicted, Thor is getting cosmic with Galactus, from the off.

Shoulda gone to Spec Savers. And the way Galactus is perceived by all takes me right back to the Trial Of Galactus too…

The only question is, which comes first, The Black Winter? The Black Surfer? Or The King In Black? Or are they all the same thing now? 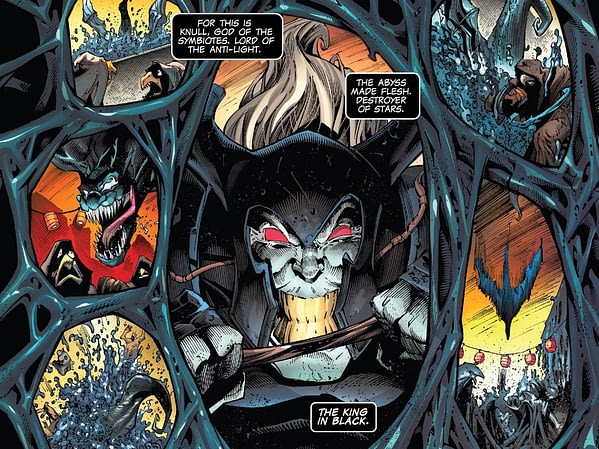 THOR #1
(W) Donny Cates (A) Nic Klein (CA) Olivier Coipel
A BRAND-NEW, SUPERSTAR CREATIVE TEAM TAKES THE KING OF ASGARD TO NEW REALMS OF GLORY!
The prince is now a king. All Asgard lies before Thor, the God of Thunder. And after many months of war, the Ten Realms are finally at peace. But the skies above the Realm Eternal are never clear for long. The Black Winter is coming. And the God of the Storm will be powerless before it. Rated T+In Shops: Jan 01, 2020 SRP: $4.99

Thor #1 is published today by Marvel Comics in all good comic shops. I bought mine from Piranha Comics in Kingston-Upon-Thames. Piranha Comics is a small south London comic store chain with a small south-east store in Kingston-Upon Thames's market centre, which runs Magic The Gathering nights on Fridays, and a larger south-west store in Bromley, which also runs Magic nights and has an extensive back issue collection and online store. If you are in the neighbourhood, check them out.