In Time Before Time #4, two desperate souls are out of their depth after stealing a time travel capsule from a criminal organization, and now they have to figure a way out of their shared mess. With noirish sci-fi thrills and a wonderfully intricate science fiction world built around them, this issue continues an engaging look at two people on the run.

Tatsuo is a criminal, working for the Syndicate as a time-traveling "coyote" that takes people from futures they hate to pasts they might find safer. Nadia is an FBI agent with her own secrets and motivations. Just when Tatsuo was getting ready to steal a time pod from his bosses and escape their oversight, he was kidnapped at gunpoint by Nadia and forced to steal a time pod from his bosses to fulfill her own needs. Now they're stuck in hostile territory, running out of ideas and options and trying to figure out what's next.

The script from Declan Shalvey and Rory McConville does a great job of turning up the heat on the noir-infused pressure these characters struggle with, brings in the well-developed antagonist (not too far from the role Gregg Henry played in the 1999 movie Payback), and generally nails every element. The hyper-stylized art from Joe Palmer, Chris O'Halloran, and Hassan Otsmane-Elhaou pulls off a neat trick of making things more realistic by exaggerating and distorting certain elements. There's a late panel that's very impactful, but trigger warning, it does show very extreme violence.

If you like noir and you like science fiction, this book will be right up your alley and shows a great deal of solid thinking from a talented crew of creatives. RATING: BUY.

Time Before Time #4
By Declan Shalvey, Rory McConville, Joe Palmer
A startling discovery threatens Tatsuo and Nadia's fragile alliance, while a deadly trap begins to close around them. 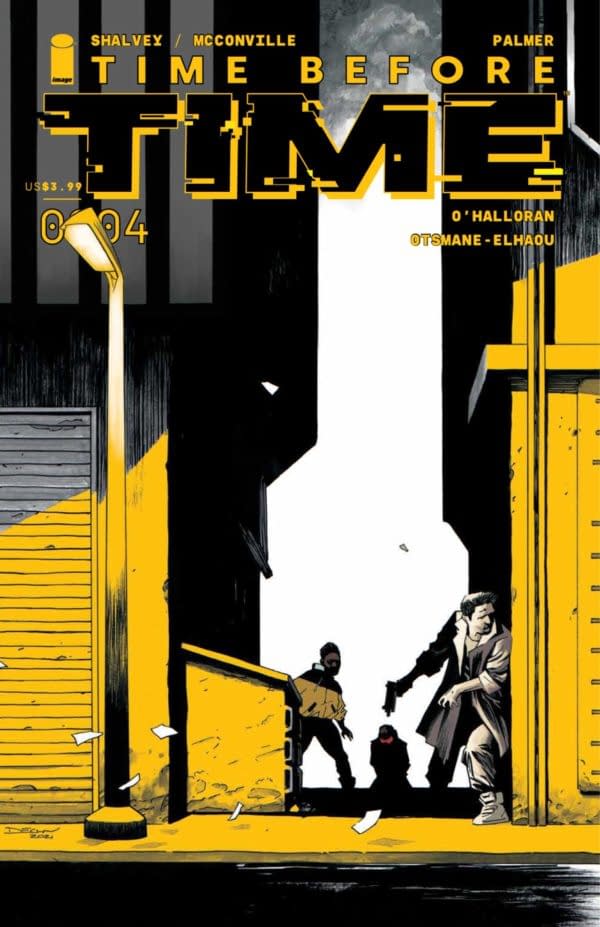 Review by Hannibal Tabu
8/10
There’s an increased sense of urgency as two-time tossed polar opposites struggle to stay alive when nothing is what it seems.
Credits
Editor
Heather Antos