There's a reason Immortality is getting a cult reputation since it was released back in August.  An FMV game that's also one of the best movies and TV miniseries of 2022.  just came out whose plot is the mystery of what happened to a promising young actress named Marissa Marcel. She starred in three movies, one in the 1960s (an adaptation of the real-life 1796 gothic novel The Monk, no less), an erotic thriller in 1970, and a psychological thriller in the 90s, all never released. Each movie is shot in the style of their era: 1960s Eurotrash-arthouse exploitation,1970s psychological thrillers (explicitly referencing Klute but also pulling the plot from Basic Instinct, 1990s Cinemax-style exploitation thrillers with a vague feminist edge… and David Lynch.

Immortality can get tedious. You, the player, comb through the "recovered" footage of the three unreleased movies to piece to find out what the movies were about, who the lead actress is, and what happened to her. The mystery of Marissa Marcel ties it all together. It's too long to be a single movie, which puts it in the realm of a TV miniseries. There are at least six layers of meaning and theme operating here. You click on an object, pixel-hunting to unlock more clips, so if you're just playing a game, you might get frustrated. If you immerse yourself into the rabbit hole of the movies and what's going on underneath, that's where you might get hooked. Menon Gage gives possibly the most layered performance of the year, grounding the whole story as she acts in different styles specific to their genres and time periods, on top of the evolution of Marissa Marcel from fresh-faced ingenue to increasingly jaded but ambitious artist as well as the fiction characters Marissa plays in the three movies.

To anyone who's ever worked on movies or been on a set, the whole cast gives utterly authentic performances as professionals on a set. The behind-the=scenes drama of mounting tensions, the abusive personalities, the predatory directors, the commentary on the abuse and exploitation of women in the industry, and the lasting damage it does is the story's biggest theme. These women's thoughts, emotions, and revenge is also the payoff. The three movies, Ambrosio, Minsky, and Two of Everything aren't jokey spoofs like FMV games often are. They're co-written by Allan Scott, who wrote for Nic Roeg and most recently The Queen's Gambit, Amelia Gray, a writer on Mr. Robot, Maniac and Gaslit, and Barry Gifford, author of Wild at Heart and collaborator of David Lynch, who worked with director Sam Barlow to make them feel true. Each movie is shot with an aspect ratio and color scheme that replicates era-specific film stock and design. All these elements come together to make us feel immersed in the story more than the clicky gameplay. Players to engaged as audience members, observers rather than gamers, forced to think about their own relationship to movies, particularly sex, nudity, and the predatory impulses behind the camera that drive the male gaze. What you find is a story of heartbreak and tragedy in the pursuit of Art over more than 30 years.

More than one YouTube commentator has cut together videos that line up the clips in a linear manner to explain clearly the three movies and what happened to Marissa Marcel on the literal, surface level. It is an example of Gnostic storytelling where there is a hidden meaning to the world. To spoil that final mystery is to deprive you of the pleasure of discovering it yourself. It is meant to be found first by accident while you play, then it reveals itself more consistently once you know where and how to look for it. It is as strange and mysterious and immersive as Neil Gaiman's The Sandman and the works of David Lynch, both already proponents of Gnostic storytelling. It's a meta-commentary about filmmaking and creating art and their parasitic nature. It's really about trying to achieve immortality through Art.

Immortality is now out on Xbox Game Pass and Steam and will be on Netflix's mobile games platform for iOS and Android phones and tablets, which points to it being a game/movie/TV show binge hybrid. 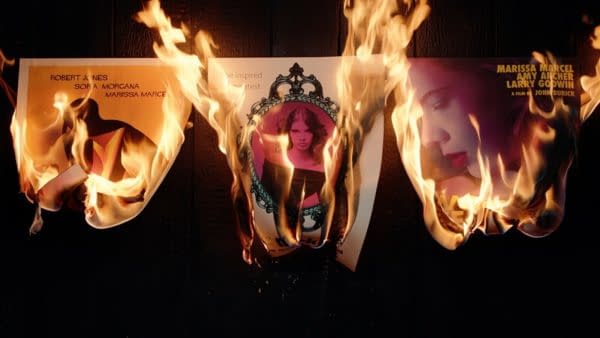 Review by Adi Tantimedh
9/10
Sam Barlow's latest FMV game Immortality is his most ambitious yet, a meditation and deconstruction of filmmaking, the creation of Art and the exploitation of women in the film industry as players uncover a decades-spanning mystery filled with heartbreak and tragedy.
Credits
Publisher
Half Mermaid
Developer
Sam Barlow
Release Date
8/30/22
Reviewed On
PC (Steam)
Also Available On
Xbox Game Pass

I Hate Suzie Too: Billie Piper Series Returns to HBO Max This Month

Billie Piper returns to HBO Max on December 22nd with I Hate Suzie Too, as Suzie Pickles seeks redemption while keeping her celebrity status.

SAS Rogue Heroes has been renewed for a second series by the BBC after it became one of the biggest new shows in the UK this year.

Doctor Who: TARDIS Goodbyes Created Moments of Such Sweet Sorrow

These Doctor Who moments of sad TARDIS partings between the Doctor & their companions show what was missing in the Thirteenth Doctor's run.

Bandai Namco has dropped a new DLC into Elden Ring today as players can now fight each other in the new PvP Colosseums.

Fast Travel Games unveiled a new platform of sorts for VR gamers as GameVRoom, a brand-new app that brings regular titles to VR.

Pearl Abyss revealed this week they will be debuting a brand new class for Black Desert over the weekend with a special livestream.

Quilts & Cats Of Calico Announced As Adaptation Of The Board Game

Monster Couch and Flatout Games revealed Quilts & Cats Of Calico today, as they will be releasing an adaptation of the board game.