Encanto arrives at an interesting time for Walt Disney Animation. Starting with Tangled in 2010, they switched to CGI animation and went on another epic run of hits, including Wreck-It Ralph, Frozen, Big Hero 6, Zootopia, and Moana. All of them did huge box office, two of them bore sequels, and four of the most popular Disney Princesses came from those films. Since Moana, however, things have taken a turn. The sequels to Ralph and Frozen made a bunch of money but were not as well received. After not releasing a film in 2020 because of the pandemic, Raya and the Last Dragon was released in the spring to mild reviews and has been pretty much forgotten. One wonders if they are stuck in a bit of a rut, and after seeing Encanto, it only solidifies that thinking.

Encanto Misses More Than It Connects

Encanto is set in Colombia in a village that is home to the Madrigal family, all of whose members have a singular magical gift like great strength, shape-shifting or superhuman hearing. They learn what their gift is during a ceremony when they turn 5. Well, all of them but Mirabel (Stephanie Beatriz). She does not have a gift, and the family is pretty divided about her and what to do with her. When her cousin turns five and is about to receive his gift, Mirabel has a vision of their beloved, magical casita cracking apart and the candle going out. When she tries to show everyone else, it all seems normal again. She overhears her Abuela, Alma (María Cecilia Botero), talking about how their magic is having issues and decides to track down her uncle Bruno (John Leguizamo), whose gift of prophecy wasn't welcomed by everyone, so he disappeared and gets to the bottom of everything.

Right off the bat, Mirabel's story is gorgeous to look at, like pretty much every Disney film these days. The world is full of color and vibrant, and they do a great job injecting grays into the world as the story turns dark. The problem is never how the film looks anymore; the problem with Encanto and other recent Disney animated feature films is the script. This one is all over the place, with problems popping up left and right from a storytelling standpoint, and instead of working through it, the filmmakers just move on and let the audience figure it out. Almost like they are saying that nothing matters, there is no explanation; let's just all agree to move on. It feels like they are just biding time before the next musical number starts.

This one features songs penned once again by Lin-Manuel Miranda. While there are standouts, especially "We Don't Talk About Bruno," but I found myself finding some pretty familiar musical cues in the music from previous scores he has done for the studio. Lots of Moana vibes floating about in the melodies. That is not a bad thing per se, but it would be nice to see someone as talented as Miranda flex his muscles a bit more.

By the end of the film, when the big explanation comes as to why the Abuela is the way that she is, it is too little too late and very muddled. None of it really makes sense, and they constantly undercut their own messages they are trying to convey. Encanto stuffs about six hours of content into an hour and some change, and it gets pretty dizzying to try and keep up with.

In the end, Encanto leaves you scratching your head about what you just watched, and that is never the feeling you want to have when leaving the latest Disney film. It is a shame too; this is such a beautiful film, with great voice work and catchy songs. But the story is such a deep mess that the shiny, vibrant world lets in just a little bit too much gray. 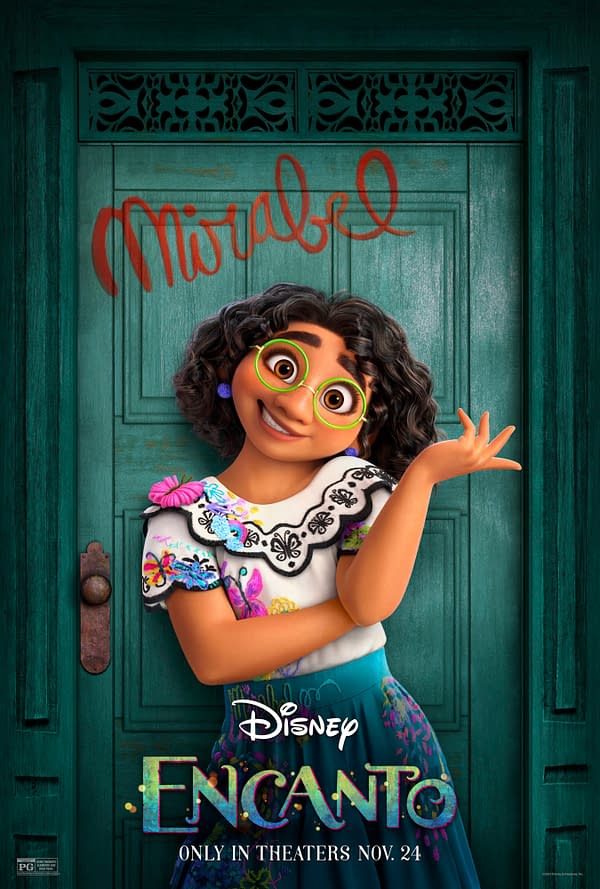 Review by Jeremy Konrad
5.5/10
Encanto is gorgeous, full of great vocal performances, and catchy songs. Too bad it is completely let down by a wildly uneven script.

Writers Guild Awards Nominees For 2022 Have Been Revealed

The nominees for the 2022 Writers Guild Awards have been announced. They will be given out on Sunday, March 20th.

Tomorrow, WWE fans and wrestling figure collectors can welcome back the WWE Retros on Mattel Creations. Hurry before they are gone.

Uncharted Dev's Are Hopeful for a Sequel to the Movie

Uncharted might not be out yet, but that doesn't mean people aren't looking toward the future. The thing with Hollywood is that rarely are movies pitched

A new international poster for Turning Red has been released. The new Pixar movie will debut exclusively on Disney+ on March 11th.

Giveaway: Win A Blu-Ray Copy Of The Film Superhost