Disclaimer: COVID-19 numbers are currently spiking all over the world, and the danger from last year is very much still present despite the vaccine. When we are reviewing Free Guy or any movie that will be released in theaters, a positive review is not an endorsement or encouragement to see a movie in the theaters. That is a risk that you must make for yourself and those around you. Please take into account whether or not you are personally vaccinated or if you are around someone who is high risk and any other health concerns for you or your family. If you are going to see a movie in theaters, do your best to social distance and wear a mask. The movie theater popcorn is not worth it. Stay safe, and please get your shots as soon as possible.

Free Guy isn't going to change anyone's life, but it has a surprising amount of heart, it's very earnest, and it isn't here to make fun of the demographic it is trying to hit.

As any millennial will tell you, we lived through the demonizing of video games to them becoming completely mainstream within our lifetime. So if there was ever a generation that could pick up on a piece of media being mean-spirited toward gamers, it would be us. [Like my high school biology teacher being baffled that I played games and also read books]. Going into Free Guy, one would assume that this would once again be another movie that is looking to take cheap shots at people who play video games when the only people it appears to take shots is the games industry itself, but more on that later.

The people we see playing this fictional game are just normal people from all age groups and genders. There is one shot at a 22-year-old living with his parents still, but most people in their early 20's are living with their parents these days, so that isn't even a dig anymore. With the way that rental rates are, it's basically practical, but we digress. It very much seems that the people behind the cameras of this movie either spent some time being a gamer themselves, or they listened to not only young people these days but the aforementioned millennials that grew up on this stuff.

However, because of the topic in general, there is likely going to be an age gap here. The under 35 demographic is likely going to love this movie and will really be able to understand all of the deep-cut cameos that might go over the heads of someone not super into the streaming generation of video games. Once you get closer to 40, however, it's likely going to be a bit more of a mixed bag. That is the generation that could take or leave video games and might not have the nostalgia factor. However, the general story is broad enough that even if someone isn't the target demographic, they will likely enjoy the story that is put in front of them. That is mostly because the cast does a really good job of making even the video game characters feel like fully developed human beings. Ryan Reynolds is pretty much doing exactly what you would expect from him, but Guy is a surprisingly earnest character. Millie is never treated like some sort of magical unicorn because she's a woman who not only plays games but also worked in game design. It is a refreshing look at the reality of the industry.

That being said, the reality of the industry might be hitting a little too close to home when it comes to Taika Waititi's Antwan, who is the CEO of the game studio that runs the Free City game. He's verbally abusive to his entire staff and undermines the art department's work without a second thought. He only cares about the numbers and not about the art that could come out of games. He goes on a tirade about the importance of franchises over creating new intellectual properties. He acts incredibly unprofessional at the office to his employees. Does this all sound a bit too familiar to anyone who has been watching the games industry in recent years? Because all it needs is some blatant sexism and racism, and this could be the offices of any studio from Activision Blizzard to Ubisoft to Rockstar Games to there are literally too many to count [allegedly].

This movie was shot in 2019 before the latest two allegations became mainstream news, but it has been an open secret for many years that the games industry has some seriously problematic people in upper management. Did writers Matt Lieberman or Zak Penn actually speak to anyone in the industry when it comes to Antwan? Maybe, but they haven't said one way or another yet. Were they trying to make a statement here? Probably not, but with the reckoning the games industry has been going under in the last few years, a villain like this feels incredibly real.

Free Guy is exactly the kind of love it and then leave it summer blockbuster that we haven't seen in a while. It's unapologetic in what it is here to do, and it appears to have a level of respect for the people that it is talking about, which is refreshing. While it likely didn't come out to make a statement about some of the incredibly problematic people running the games industry or the importance of original IP over sequels or art over numbers, it still does all of those things. It makes the blatant cross-franchise cameos a bit more awkward to watch, but they don't feel like they are the point of the entire movie like they did in Space Jam: A New Legacy. Free Guy is here to be a fun little comedy about video game characters while also being very sweet. For the second time this week, we must compare this movie to Deadpool with its surprisingly earnest love story. The center of Free Guy is also a love story about fighting for your art and about the meaning of life while also throwing in as many streamer cameos as you can handle. 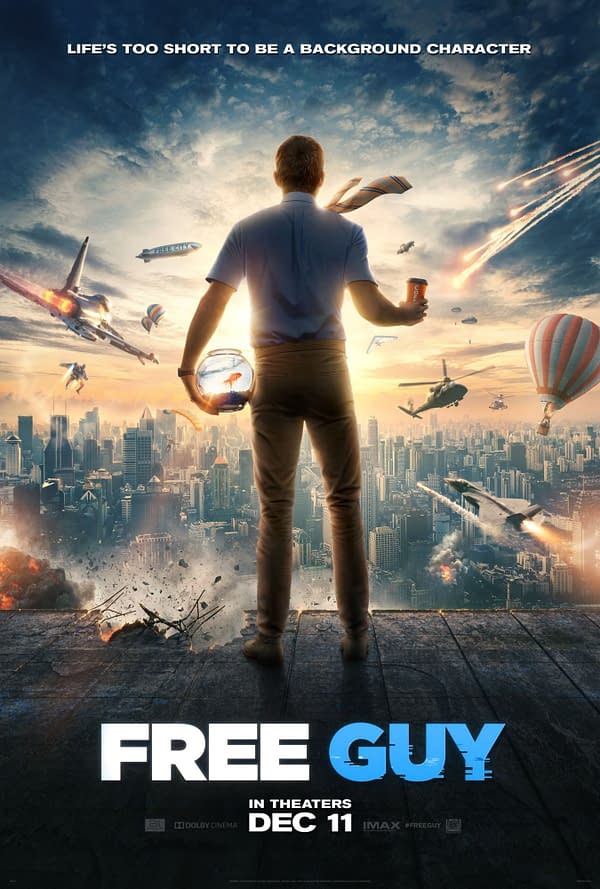 Review by Kaitlyn Booth
8/10
Free Guy isn't going to change anyone's life, but it has a surprising amount of heart, it's very earnest, and it isn't here to make fun of the demographic it is trying to hit.
Credits
Director:
Shawn Levy