Jurassic World Dominion limps the trilogy across the finish line with one of the worst screenplays of the year. It doesn't make any narrative sense, feels thrown together, and has all kinds of pacing issues. Way too long and feels too stuck in the past of the franchise to worry about not only moving forward but keeping the promise of the end of the last film. The dinosaurs are cool, though.

Jurassic World, But Not Really

The biggest issue with this new film is that it fails to deliver on the promise of Fallen Kingdom's ending. Much was made of the decision to release dinosaurs into the world at large at the end of that one, and here we get very little of it. About… five minutes total. Bookends really, at the beginning and end. In between, we get another film where our characters, this time the new class with Chris Pratt and Bryce Dallas Howard, join the old guard with the returning Jeff Goldblum, Laura Dern, and Sam Neill in yet another sanctuary for the dinos. Right there, you have failed the audience. We wanted to see the dinosaurs running amok worldwide, not yet another contained area to trap them in. And they are trapped by one of the most boring villains in some time. Campbell Scott's poor Tim Cook impression loses its charm almost instantly, and the twist that he is -gasp- the villain is spoiled as soon as you see what his name is.

Not to mention how little dinosaur we get for the first 45 minutes or so. Instead, we get a flimsy plot where director Colin Trevorrow tries to have something important to say about genetics and the responsibility of messing with them. And boy, does it fail and fall flat. You can't really try to tell us how irresponsible it is to mess with gene splicing and DNA replacement and then cut to s sick dinosaur fight. You kind of lose the message when you try to walk that line. It also leads to severe boredom and eye-rolling for the first half of this insanely long film. Films should be as long as they need to be, but they also need to not meander, and this was not the case here. Why they decided to head this way in these last two Jurassic World films is a mystery.

This also gives the cast no room to breathe. Goldblum is terrible in this, and really so are Dern and Neill. All of them feel like they are going through the motions, with Goldblum especially looking at us in the audience and asking us if we know why he is here cause he sure doesn't. Pratt does Pratt things, and we stumble around for an hour before getting to anything good.

After that first hour, things don't get any better from a storytelling aspect, but we start to at least have some fun. This is some of the best dinosaur work in a Jurassic film, with some of the new dinos that take center stage, leaving a mark. The Giganotosaurus was especially impressive and got one of the better action scenes in this trilogy. A personal favorite, the Dimetrodon, also has a great scene. Fans will love the Dilophosaurus, and old Rexy shines as well. Sure, the characters you know will get away from the dinosaurs and make them look stupid sometimes, but nothing stood out as egregious.

There are also some good performances here. Bryce Dallas Howard really stepped up and made something out of Claire in Fallen Kingdom and now Dominion. Newcomer to the franchise Mamoudou Athie is great as Ramsey, so good that you wonder why they needed Jeff Goldblum at all. The real star of the show is DeWanda Wise as pilot Kayla. She gives off some serious Han Solo vibes, and every scene with her is entertaining and provides some genuine laughs. If there is a seventh film, hopefully, she will be back for it. It is cool to see the two trilogies casts come together and interact, and some fun one-liners really land when they do.

But it is too little, way too late. By the time we see where they will leave this world- hey, they said this is the end of the Jurassic era!- you do not care a lick; you just want the credits to roll so you can leave. The last few shots we see once again show us a film we were promised and not delivered, a world where dinosaurs roam the earth. Pity that is not what Jurassic World Dominion decided to be. 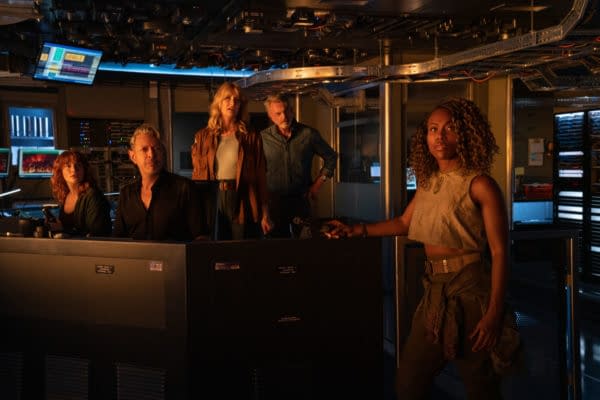 Review by Jeremy Konrad
4/10
Jurassic World Dominion limps this new trilogy across the finish line, failing to deliver on the promise of Fallen Kingdom's ending. Not the worst of the franchise, but not very good either.

NECA has revealed three new TMNT figures inspired by both Mirage Comics and the Universal Monsters, with preorders now live.