The Emperor's Sword is an interesting curiosity: a seemingly typical wuxia movie about warriors who return to fight against the forces of a tyrant. It's a B movie in the sense that it doesn't feature any famous A-list stars, nor are the co-directors household names. Then it takes a darker, more tragic direction at almost every turn to deliver a surprisingly downbeat ending.

The plot uses the real-life Qin Emperor's uniting China under one kingdom as a starting point. After his death, his sword, the emblem of his power, is given to a general to guard. A new despot takes over and slaughters the general and his family to seize the sword, but his teenage daughter is saved by one of the former heroes of the last war and brought to his former comrades for her protection. The comrades, all heroes who helped fight for the new empire, are older now, tired with lives and family, are wary of the fight, so a young, cocky archer decides to escort the girl to the sacred temple she has to bring the sword to. The despot's army includes a corrupt minister, a former comrade of the heroes, and a brother-and-sister team of archers.

The action is well-done if a bit too obsessed with fetishistic slow motion. There's a small amount of dodgy CGI that doesn't' distract from the story. The actors look like people instead of the implausibly-pretty young things who dominate Chinese TV shows now, especially Wuxia shows. Thankfully, there are no "pretty people fall in love while flying in slow motion" scenes in this movie because it's not that kind of story. There's an efficiency and seriousness in the setpieces and the story, which at 90 minutes does not wear out its welcome. This is the kind of decent B Movie that used to show up on TV on Saturday afternoons in Asia. This actually goes to a surprisingly dark and pessimistic place: Yesterday's heroes become tomorrow's fugitives and rebels. The crushing power of the state is inescapable. It goes to remind us that Chinese melodrama is not afraid of going to the downbeat ending, more than most countries' melodramas. This type of movie is in danger of vanishing into obscurity, which is why physical media like DVDs and Blu-Rays are still crucial for keeping them alive.

The Emperor's Sword is now available on VOD and Blu-Ray from Wellgo USA. 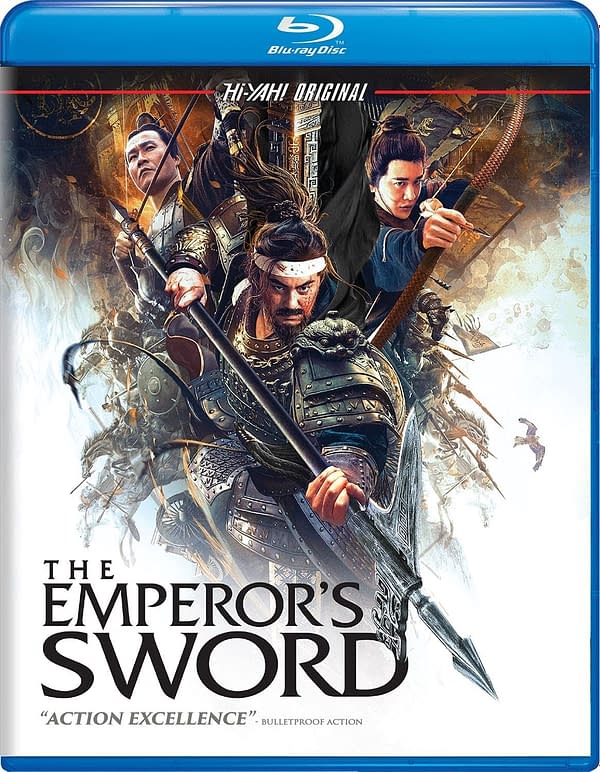 Review by Adi Tantimedh
6.5/10
An efficient wuxia B-movie that's efficient, fun, does not wear out its welcome and goes to surprisingly dark and downbeat places.

Voting for the Crunchyroll Anime Awards 2022 is officially open to fans, so here's a look at the nominees and how to have your voices heard.