Disclaimer: We are currently in the middle of an ongoing pandemic in the United States, where this writer is based. Our government was slow to act, and because of that, our numbers are still very high. A movie theater is not a safe place to be because people will be taking off their masks to eat. So any recommendation for this movie or any other movie reviewed should not be seen as an encouragement to go to the theater. That is your decision and yours alone, but please be careful if you do. I was able to see The New Mutants in a theater with only friends that I trusted to be as safe as possible thanks to selectively buying seats to take the entire theater. This can be done for not a lot of money and is something I would recommend looking into if absolutely must go to the theater. Stay safe, stay healthy, and wear a mask. Now onto the review…

The New Mutants takes way too long to get going, does way more telling than showing, but is ultimately an all right entry into an extremely inconsistent franchise.

The X-Men movies have had a hard time finding themselves. There is no denying how important the first movie was as it was part of the 1-2-3 punch of X-Men, Blade, and Spider-Man that ultimately helped give us the superhero landscape we have today. However, it does not hold up by modern standards. The second movie is fine in that it's better than the first one by comparison and X-Men: The Last Stand was a mess. Origins: Wolverine was a disaster while the second managed to be about 50% of a half-decent movie by virtue of James Mangold's directing. X-Men: First Class is the best of the group movies even if it's a bit of a mess, Days of Future Past is overrated as hell, and Apocalypse and Dark Phoenix were trash fires. Both of the Deadpool movies are extremely good, and Logan transcended the genre. So "inconsistent" would be a good way to talking about the Fox X-Men movies. The New Mutants could have been the swan song that this movie went out on, but instead, it doesn't give you much more than a shrug.

The worst part is The New Mutants isn't a mediocre movie by virtue of someone not trying, not caring, or someone falling asleep at the wheel. Everyone involved with this movie very much seemed to be thinking that they were making something important and focused and that no one had ever seen in the genre. Which they did, but the execution just didn't work. This is a movie that runs for 93 minutes, and it takes way too long to set everything up. The horror elements and the giant CGI bear are there but not until the latter part of the second act and the third act. The first act is the one with a lot of exposition, and we mean a lot of exposition.

The backstories that these mutants are horrific and hard to listen to, but that's the problem; you're listening to them. So it's a lot of shot, reverse shot of two people talking. While someone might say that the voice that the actors use to tell their stories helps sell the horrors of it, they could have monologued over a flashback sequence. Instead, we hear about the things that they have done rather than see any of it. The New Mutants very much broke the "show don't tell" rule, and since most of said exposition was done in the first act, it could have broken up some repetitive feeling scenes.

As someone who was not a big X-Men comics fan, we did get to see it with several people who were, and they said that the powers presented on-screen seemed accurate to the comics, so take of that as you will. As for our giant CGI bear, that is certainly a giant CGI bear. We only see the bear twice really in the beginning and at the end, which is a shame. There needed to be more bears and more tiny purple dragons in this movie and probably every movie. As for the cast of The New Mutants, it's sad to see Maisie Williams be one of the weaker links of all the actors, but then again, everyone in the movie is trying to steal their scenes back from Anya Taylor-Joy as Magik because she just steals every single scene that she is in. Her powers are probably the most dynamic and fun to watch. The implications of her backstory, as someone who isn't familiar with her comic book counterpart and doesn't know how page to screen accurate or inaccurate it is, was one of the most disturbing of the group.

When things finally hit the fan in the third act, and we get to see all of the horror elements, including the Smiling Man, who is just creepy looking and a scene in a pool with Henry Zaga's Sunspot, the movie is a lot more fun. The third act is our fight against our giant CGI bear, and it's a pretty decent fight. Each character is given a chance to shine though Magik remains the MVP of the entire fight sequence and probably the movie. There are some connections to the larger X-Men universe, including a reference to a post-credits scene in another film and callback to the leas likely X-Men movie to show up in The New Mutants which won't be spoiled.

The New Mutants could have been the swan song that the incredibly influential X-Men series went out on before they inevitably get rebooted by Marvel Studios. As it is, the movie is all right with a few standout points and a truly bonkers performance from Anya Taylor-Joy. A really bad movie is interesting, like watching a train wreck, and with a troubled production like this one, it can be interesting to dissect what went wrong. A great movie is fun to the opposite as you pick apart every little twist that makes it great. A mediocre movie? Well, the X-Men probably deserved better, but at least the last film in this franchise isn't Dark Phoenix. 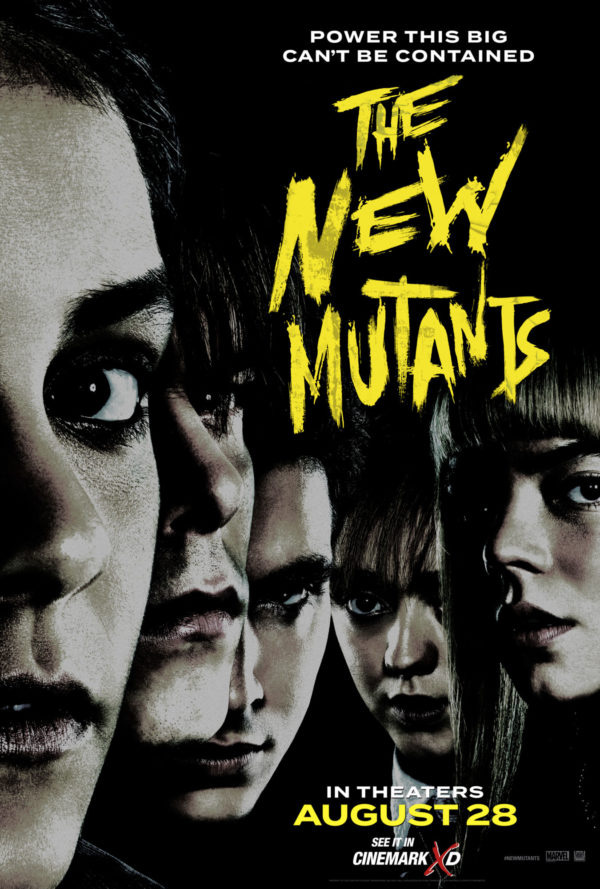 Review by Kaitlyn Booth
6 out of 10
The New Mutants takes way too long to get going, does way more telling than showing, but is ultimately a mediocre entry into an inconsistent franchise.

The Green Knight has been pulled from its theatrical release in the United Kingdom due to spiking COVID-19 numbers.

Old Review: M. Night Shyamalan At His Most Blah

Old is a mid-tier science fiction thriller with some interesting body horror moments and something moderately interesting moral quandaries at the end.

Legendary and Warner Bros. have finally released another trailer for the upcoming big-screen adaption of Dune which is due out on October 22nd.

Michaela Coel, who just got four Emmy nominations for her role in I May Destroy You, has joined the cast of Black Panther: Wakanda Forever.

In the Heights Breakout Star Leslie Grace Cast as Batgirl

The DC universe has found its Batgirl. Sources are reporting that In The Heights breakout star Leslie Grace has been cast as Barbara Gordon, aka Batgirl.

14 New Character Posters for Dune Show Off the Impressive Cast

Do you have one of those friends that won't shut the hell up about Dune?. . The movie was delayed almost a year thanks to COVID-19, but it appears to be

The trailer for Full Moon Features new Demonic Toys film Baby Oopsie is here! It debuts on their streaming service next Friday.

A new trilogy of Exorcist films is coming from Universal, Blumhouse and Peacock starring Leslie Odom Jr. and directed by David Gordon Green.

Midnight in the Switchgrass: Randall Emmett on His Directorial Debut

Randall Emmett talks to Bleeding Cool about the crime drama Midnight in the Switchgrass for Lionsgate in his directorial debut.

Baker: Nothing But Praise for Ackles During The Long Halloween Panel

Troy Baker had nothing but praise for Jensen Ackles today during the CC@Home panel discussion of the Batman: The Long Halloween, Part Two.

Jolt: Kate Beckinsale is a Violent Dork in an Incongruous Actioner

Jolt is yet another pulp female action thriller that has its tongue in its cheek and its boot in someone’s face. Its high concept is a heroine with