Under the Volcano chronicles the story of AIR Studios Monsterrat, which was built by Beatles' producer Sir George Martin in 1979. Located in the Caribbean, Monsterrat is a British island territory that Martin thought ideal to build his studio near an active volcano as a remote sanctuary for artists looking for isolation and inspiration. Directed by Gracie Otto, the documentary shows a who's who of the music industry mixing contemporary interviews from the likes of The Police, Earth, Wind and Fire's Verdine White, Dire Straits' Mark Knopfler, and Jimmy Buffett, Monsterrat natives who worked with them, archival interviews from the likes of John Lennon, Paul McCartney, Elton John, Rolling Stones and more.

The documentary begins by getting into the mind of Martin and his exploits in the music industry, his journey to challenge others in the industry, and wanting to expand his legacy beyond his reputation of being the producer of the Beatles. Otto is pretty thorough when it comes to letting their subjects discuss the magic, mood, and inspiration that came from the island. From the surface, a project of this magnitude could be considered difficult, and it shows, given the availability of the artists covering as much ground as possible. The strongest ones were from the Police with Sting, Stewart Copeland, and Andy Summers as they talked about how they achieved some of their greatest success when they arrived in Monsterrat.

I felt we got some quality segments in regards to McCartney and how he came to develop the 1982 duet hit Ebony & Ivory with Stevie Wonder, John's 1983 album Too Low for Zero, and 1984's Breaking Hearts and the Rolling Stones' comeback album Steel Wheels in 1989. It would have obviously helped if McCartney, Wonder, John, or any of the Stones were available to grant updated takes on their experience at AIR Studios Monsterrat. I would definitely recommend this film as required viewing, especially if you follow pop or rock music from its triumphant beginnings to its tragic end. Otherwise, here's a Spotify playlist compiled from all the best music AIR Studio Monsterrat had to offer. Under the Volcano comes out to on-demand and digital on August 17. 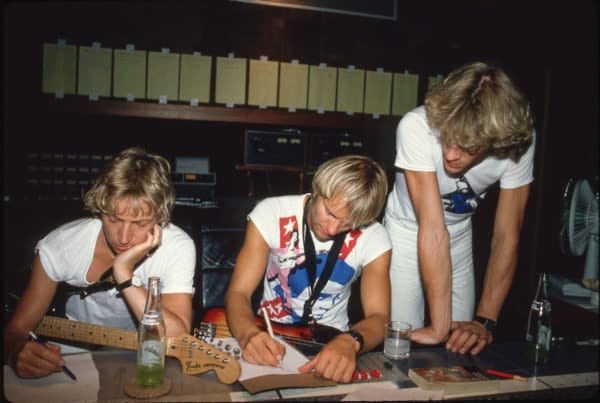 Review by Tom Chang
9/10
Far more than a mere greatest hits compilation, Under the Volcano tells the story of producer George Martin and how he came to develop AIR Studios Monsterrat and turning it into a beacon of inspiration and paradise for the music industry's brightest minds. Interviews from Martin's son, The Police, Jimmy Buffet and more anchor a powerful tale of sanctuary for artists to thrive.
Credits
Director
Gracie Otto

Chicago will be the home of the first-ever Golden Girls convention & WWE superstar Xavier Woods already has the time off for Golden-Con.

What We Do in the Shadows: Lucy Punch Talks Lilith, Would Love Return

Bleeding Cool spoke with Lucy Punch about her memorable turn as Nadja's arch-nemesis Lilith in FX comedy What We Do in the Shadows.

Being the Ricardos Review: The Pieces Just Don't Fit Together, Ricky

Being the Ricardos is a movie that only half works because star Nicole Kidman is really only believable when she is playing Lucille Ball the person, not

The star of The Girl with the Dragon Tattoo recently addressed the chances of her returning to the character of Lisbeth Salander.

Filmmaker Edgar Wright recently discussed the importance of music in Last Night in Soho and the scene that demanded a specific song.

Marvel Studios President Kevin Feige has now shed light on opening the door for returning characters from other films, as well as the MCU.