Look! It Moves! by Adi Tantimedh #105: Hurrah For The Sexually-Ambiguous Swordswoman From China

Home » Pop-culture » Look-it-moves-by-adi-tantimedh » Look! It Moves! by Adi Tantimedh #105: Hurrah For The Sexually-Ambiguous Swordswoman From China

I go out to see less and less of the latest blockbuster releases these days because I find Hollywood movies are getting more and more generic and dull even as they get more expensive and slick with increasingly elaborate but weightless CGI special effects. 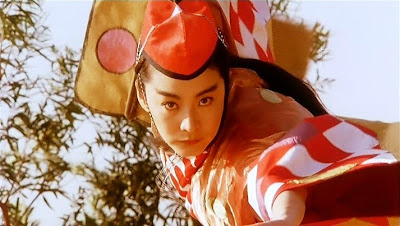 I was talking with my friend, the critic and author Roz Kaveney over the weekend, as she had just watched Tsui Hark's SWORDSMAN 2 and SWORDSMAN 3: THE EAST IS RED for the first time and her mind was duly blown. In many ways, SWORDSMAN 2 probably symbolises everything that a Tsui Hark production is. The first SWORDSMAN in 1990 movie was supposed to be an adaptation of THE PROUD, SMILING WANDERER, Jin Yong aka Louis Cha's novel about a wise-cracking wandering swordsman who gets caught in the middle of a turf war between would-be despots. It was popular enough to kick-start the wuxia genre again for most of the 90s. SWORDSMAN 2 takes the same basic premise as the first, replaces the lead with Jet Li, who was still establishing his stardom at that point, but what shot it over the top is its introduction of a new character named The Invincible Asia. Asia was another power-hungry would-be dictator who studied a stolen scroll to learn near-invincible supernatural martial arts powers. In order to attain that power, he had to castrate himself, and instead of becoming a eunuch, forged a new identity as a woman. Jet Li, while searching for the scroll comes across Asia and thinks she's just another damsel-in-distress and the two of them become attracted to each other without realizing they're really enemies, and he already has at least three other women, all warriors, who have the hots for him. It all comes to a head when he has to confront her at the end and they discover each other's real identities, which makes for one of the most interesting and ironically tragic climaxes ever seen in action movies. Jet Li might have been the top-billed star in SWORDSMAN 2, but it was Brigitte Lin as Asia who walked away with the movie and became a big star as a result of this movie.

SWORDSMAN 2 was such a hit because of Lin's performance as The Invincible Asia that a quickie sequel was made, called in English SWORDSMAN 3: THE EAST IS RED, even though Jet Li's hero is nowhere in the story. The budget seems to be smaller than SWORDSMAN 2's, and it feels like it was shot extremely quickly, but even with the cheaper production values, the story manages to be even crazier than SWORDSMAN 2's. Taking place years after SWORDSMAN 2, the plot has the Spaniards are mucking around trying to get their chunk of land and power, as are the Japanese who use Ninja, and the land is full of fake Invincible Asias starting their own sects and armies, forcing the real Asia to come out of hiding to kill everyone who dares to commit murder and wars in her name, with a hapless Chinese official in tow who has fallen in love with her, and then one of the fake Asias turns out to be one of her lesbian lovers trying to find her.

The Invincible Asia, whose name is obviously pulp symbolism, is probably one of the strangest characters in the history of fantasy movies. She was more antihero than outright villain, and seemed to symbolize not just the anger and wrath of a China/Asia that had been continuously fucked over by foreign powers – Tsui Hark is nothing if not explicit in his political commentary – but a kind of all-encompassing sexuality at the same time. Asia was, by today's standards, a transsexual who had female lovers, but also inspired love and lust in men as well. The role made Taiwanese actress Brigitte Lin Ching-Hsia the biggest star in Asia in the 1990s, in the decade when Chow Yun-Fat began to reduce the number of movies he made and moved onto Hollywood. Hong Kong already had a theatrical tradition of women playing men in Peking Opera and period martial arts movies, and SWORDSMAN 2 and 3 were just carrying on that tradition in movies, turning Lin into a sex symbol in the process, lusted after by both men and women. Lin had already been fairly well-known before that, having been a teen star in Taiwan in the 70s in romantic melodramas, then appearing in various movies like Tsui Hark's ZU: WARRIORS OF THE MAGIC MOUNTAIN as a goddess and PEKING OPERA BLUES as a tomboy revolutionary in 1920s China. For the rest of the 1990s, Lin would be cast in wuxia movies trying to cash in on the success of SWORDSMAN 2, playing sexually-ambiguous and doomed warrior women. It got to the point where she played a schizophrenic swordswoman with a split personality in Wong Kar-Wai's ASHES OF TIME as a postmodernist commentary on her androgynous warrior characters she'd been playing throughout the decade. 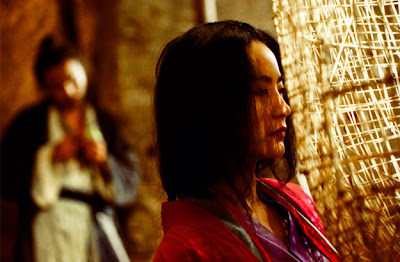 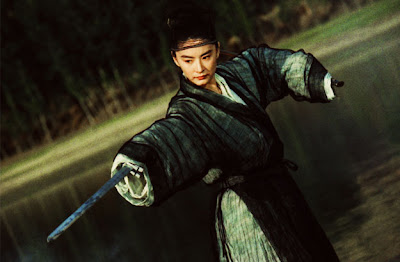 And all this was down to that one character: The Invincible Asia in SWORDSMAN 2. No one has created a character as unique and ambiguous before or since. The character has achieved a kind of cult status in the LBGT community, and only because of Brigitte Lin's performance. She was never convincing as a man, nor was she meant to be, and her appeal is entirely based on her androgynous, tomboy-ish feminity. Tsui Hark had always been interested in unusual and sexually-ambiguous heroines in his movies, and this is a theme that was in SWORDSMAN 2 and can still be seen as recently as JUDGE DEE AND THE MYSTERY OF THE PHANTOM FLAME.

But I get the feeling even Hong Kong movies are getting more homogenized even as they get slicker these days. A CHINESE GHOST STORY has just been made again by another studio and director, and from what I've heard, it has none of the crazy, unpredictable creativity of Tsui Hark's version, despite a higher budget and better effects. I miss movies that are genuinely unpredictable and you never knew what you might see when you sit down to watch them.

SWORDSMAN 2 and SWORDSMAN 3: THE EAST IS RED are on DVD in both the US and UK. SWORDSMAN 2 can also be streamed on Netflix in the US.

Editing my thoughts as usual at lookitmovies@gmail.com

Follow the official LOOK! IT MOVES! twitter feed at http://twitter.com/lookitmoves for thoughts and snark on media and pop culture,
stuff for future columns and stuff I may never spend a whole column writing about.

Amazon Pulls Pirated Comics From Kindle – Most Of Them

Steve Ditko is best known as the artist and co-creator of Spider-Man and Doctor Strange. Born on November 2nd, 1927 in Johnstown, Pennsylvania, the son of

Comic Store In Your Future Asks, Where Is Marvel?

Rod Lamberti of Rodman Comics of Ankeny, Iowa, writes weekly for Bleeding Cool. Find previous columns here. And it's time to talk Marvel. What a year!

It's a while since John Byrne wrote and drew Spider-Man. Quite a while. But for a time he was the pre-Brian Bendis Brian Bendis, writing and drawing

Debbie Fong has sold her debut graphic novel Next Stop to Gina Gagliano at Random House Graphic. Next Stop is a middle grade contemporary graphic novel

Michael Moorcock is the most influential living fantasy writer, with many more claims to fame to boot. And with Gallery/Saga Press reprinting his Elric

A new set of siblings is coming to the new My Little Pony film on Netflix this fall, so say hi to Pipp Petals & Zipp Storm.

Now that the world has taken on the challenge of the 4 hour film, Zack Snyder's Justice League, we can discuss our favorite changes made.

Dwayne Johnson Has Confirmed That Filming on Black Adam Has Started

Dwayne Johnson has confirmed that production has started for Black Adam after many delays. The movie will be released on July 22, 2022.

A Modest Proposal: How Movies Can Get Us Back To Normal

Movie theaters could be a key to getting people vaccinated and helping us return to a sense of normalcy and joy.

Paramount Pictures has shifted the release dates of some of their biggest movies including Top Gun: Maverick and Mission: Impossible 7 and 8.