For the fourth week in a row, AEW Dynamite had a special title this week, Fight for the Fallen, and several PPV-quality matches advertised, which was, of course, extremely disrespectful to WWE. As punishment for some crime he must have committed in a previous life, The Chadster has once again been assigned to watch and review AEW Dynamite this week, so get ready for The Chadster to break down all the ways that AEW got it wrong.

In one of the most unfair opening segments in the history of AEW Dynamite, Hangman Page and the Dark Order got a sweet cowboy-themed video package ahead of their entrance for the ten-man elimination tag match, while The Elite got a Space Jam themed basketball entrance.

The ten-man tag could have easily headlined a PPV, but it was the main event here instead and featured high-stakes action and drama, including an indie-taker on the floor with an attempted slam dunk in a basketball hoop by the bucks. The match ended with Page alone in the ring with Omega and the Bucks, and though he fought valiantly, Page eventually fell to the One-Winged Angel (after a shot to the head with the belt), and as a result of losing, had to give up his number one contendership spot. The Chadster knows from decades of watching WWE that the opening segment should always be a twenty-minute promo that establishes the story for the rest of the show because WWE couldn't be bothered to book anything beforehand, not the latest chapter in a storyline that's been running for over a year. Tony Khan really needs to learn how to book if he's going to run a wrestling company. Jeepers!

Andrade El Idolo and Chavo Guererro teased Pac backstage they canceled the Lucha Bros rental car that Pac booked for them and sent a limo to pick them up instead, implying that Andrade is going to steal the Lucha Bros for his own stable. Is that what Andrade is spending Charlotte Flair's money on? Dump him, queen!

In a pre-recorded promo, NJPW Hiroshi Tanahashi challenged the winner of the night's IWGP United States Championship match. More unfair collusion between AEW and NJPW to gang up on WWE. Doesn't Tony Khan know how to play fair?!

FTR beat Santana and Ortiz in a tag match, during which Cash Wheeler appeared to injure his arm. The Chadster doesn't like to kick a man when he's down so he won't bring up the fact that AEW practically asks for this by putting on exciting athletic competitions every week instead of slow-paced, formulaic filler matches to pass the time until the next PPV. The Chadster is nothing if not respectful.

Britt Baker, with her arm in a cast, cut a promo on beating Nyla Rose "with a broken freaking wrist" and said, because she keeps getting injured, she's going to have to bring in more security to have her back.

Tony Schiavone announced that the second episode of AEW Rampage will be titled "The First Dance" and emanate from Chicago. The crowd chanted for CM Punk. Now you know how it feels, AEW!

Darby Allin (with Sting) cut a promo in which he called out CM Punk without saying his name. Is this how CM Punk is going to repay WWE for letting him get that job as a commentator on Fox's WWE Backstage? What an ingrate!

In a match for the IWGP United States Championship, Lance Archer successfully fended off a challenge by Hikuleo, whose father King Haku was at ringside. The Chadster doesn't know how much more of this he can take. Not only do you have more of NJPW and AEW ganging up on The Chadster's beloved WWE, but they have the nerve to bring out another legend for a cameo appearance to delight fans?! Absolutely disgusting.

Cody Rhodes was about to cut a promo backstage at the Gorilla position with Jerry Lynn and Tony Khan when Malakai Black attacked. They brawled out to the stage where Black took out Rhodes with Black Mass and then, when some officials and jobbers tried to break it up, took out Fuego Del Sol as well. Tony Khan, don't think The Chadster didn't notice that you made sure to make an appearance on camera during a segment that you knew was going to really cheese the Chadster off because it once again features AEW disrespectfully using a former WWE star better than WWE used them. Just another in a long line of personal insults by AEW as Tony Khan proves he really is out to ruin The Chadster's life. Why are you such a bully, Tony Khan?

Miro cut a promo about his wife being double-jointed. The Chadster isn't sure why that would be a good thing. The Chadster's beautiful wife, Keighleyanne, has single joints and those are enough trouble. Whenever The Chadster tries to get some lovin' from Keighleyanne, she's always like, "I can't right now, Chad. My joints hurt." Surely having double joints would only make matters worse. The Chadster would almost feel sorry for Miro if he wasn't a turncoat traitor who turned his back on WWE just because they fired him.

Christian Cage, Luchasaurus, and Jungle Boy beat Private Party (who were dressed like the Hardy Boyz) and Angelico in a six-man tag match. After, The Blade took out Christian with brass knuckles. The Chadster feels it's quite disrespectful of AEW to capitalize on Jeff Hardy's win over Karrion Kross last week on Raw by letting Private Party cosplay as The Hardy Boyz while Hardy himself couldn't be on Raw last week due to COVID. If Tony Khan had any respect for the business he would make sure no Hardys or Hardy-affiliated wrestlers appear on Dynamite while Jeff Hardy is out of Raw. Actually, if Tony Khan had any respect for the business he would just sell AEW to WWE so they could turn it into a fourth brand, but we all know Tony Khan doesn't have an ounce of respect for the business in his body.

In her debut match as a fully-contracted AEW wrestler, Thunder Rosa beat Julia Hart. The crowd is really into Thunder Rosa, which makes no sense to the Chadster. She doesn't have an evil talking doll. She doesn't wear a superhero outfit and lose 90% of her matches. What is it the crowd sees in her?!

Jon Moxley cut a promo on Hiroshi Tanahashi and how he'll be waiting for him on the other side of the Forbidden Door. More collusion. The Chadster is not impressed.

In the main event, Chris Jericho overcame Nicholas Cage in a hardcore match filled with light tubes, broken glass, and lots and lots of blood. Cage gets a lot of disrespect in the acting world, but The Chadster thought he really threw himself into this role. That said, this kind of blood and guts isn't the Chadster's cup of tea, and don't get any ideas about turning The Chadster's words into a special episode of Dynamite, Tony Khan. After the match, MJF said that Chris Jericho's next labor will be to face Juventud Guererra, calling back both to a comment Jericho made to MJF last year and to Jericho's time in WCW. Calling back to events that happened more than 90 days ago is once again very disrespectful, since WWE has well established that wrestling fans memories don't go back any longer than that, except to remember "moments." But The Chadster isn't surprised that Tony Khan doesn't understand that. Tony Khan doesn't understand anything about wrestling.

Once again, AEW delivered an episode of AEW Dynamite that was entertaining from start to finish, which everyone knows is no way to put on a wrestling show. It's a good thing that AEW is going back to Daily's Place next week for a more low-profile show with no huge matchups scheduled, and The Chadster hopes the ratings reflect that so the Chadster's beloved WWE can look better by comparison. 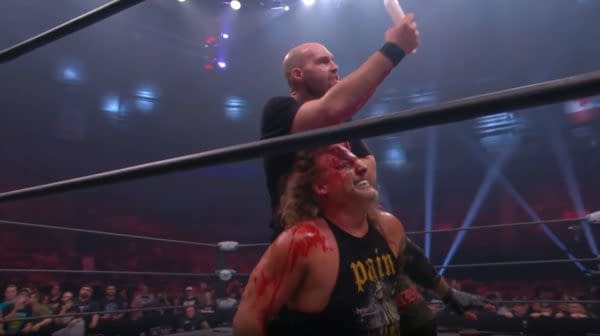 Review by Chad McMahon
7.5/10
Once again, AEW delivered an episode of AEW Dynamite that was entertaining from start to finish, which everyone knows is no way to put on a wrestling show. It's a good thing that AEW is going back to Daily's Place next week for a more low-profile show with no huge matchups scheduled, and The Chadster hopes the ratings reflect that so the Chadster's beloved WWE can look better by comparison.