It's been an excellent ride from start to finish when it comes to Andor, and boy, is it nice to see a Star Wars show and a Disney+ show absolutely nail an ending. The final two episodes of season one are both fantastic in their own ways, but episode twelve truly sets the series standard that was already insanely high with episodes six and nine. Eleven is a final bit of build-up as all of our players come together for a showdown that is little more than a riot with massive implications. There is still a way to go for several characters regarding their arcs, but they are on their way, and we have some really interesting possibilities lurking in season two.

Ferrix And The Funeral That Becomes A Riot

"A riot is the language of the unheard," and there is no more accurate statement regarding people living under the Empire in Andor. Once again, this demonstrates that if you're going to have a character give a massive speech worthy of the stage, you need to hire an amazing actor, and this time it's Fiona Shaw who gets to stand front and center. Her eulogy at her own funeral is a call to action for everyone in Ferrix. This is a place that is built and held together by the people in it; we can see that within its funeral customs how the bodies of the dead become the brickwork that house the living, and Maarva knew that if there was anywhere that could come together and stand up to the Empire, it was this place. Her stone is used to beat a soldier; one can imagine she loved that in the afterlife. It's a version for Ferrix of throwing the first brick at Stonewall.

After parting ways with Melshi and wanting to make sure that the injustice of the prison is known to the world, Cassian returns home to attend Maarva's funeral despite the danger it put him in. It all came to a head at the funeral and the riot, but Cassian isn't focused on that. He might be more invested and have a sense of justice, but he's still a man with friends and family on the line who needs a way out. Bix is finally rescued, and it's quite clear that she is either not going to be the same woman or will have a significant recovery. Brasso also gets a much larger role in these last two episodes, along with Wilmon, the mechanic's son who is executed when he doesn't have information to provide on Cassian. This little group is all people that Cassian is personally invested in on varying levels, and he wants them to be safe, which means getting the hell out of Ferrix once things get bad.

It's clear that the prison events are really the catalyst for what flipped the switch in Cassian's head, which isn't surprising. It's a very human thing to be unable to face the concept of massive injustice or consequences if it isn't personally affecting you. We saw that in the recent COVID-19 pandemic, it seemed that some people were unable to care until it negatively affected either them or someone they cared about. The ability to look down and not worry is a privilege and one that Maarva acknowledges that the people of Ferrix had for a long time. The Empire stayed out of their way, so the citizens didn't have to face the reality of what was happening, but now the Empire is here to stay, and there is no going back. It's time to wake up.

On the Empire side of things, we see more of Syril just being the worst human being, but now he's managed to worm his way into the good side of Dedra. At times, Syril and his obsession have been painful to watch because the man refuses to believe that he was wrong in any way and is willing to go to any length to prove that he was right. Nothing is more dangerous than a mediocre man with a slightly injured ego. It's a little unclear just what Syril was planning to do when he got to Ferrix, but he focused his sights on Dedra when he saw that she was there. The most human thing we have seen from Dedra in the entire season was when she revealed that Syril's stalking was freaking her out. Now Syril has saved her life, and she clearly has no idea what to do with that. He stepped in when she was at her most vulnerable, and now she has that hanging over her head. How can she possibly get rid of him now? Their dynamic provided it continues in season two, will only get more toxic and unhealthy as time goes on.

Syril and Dedra's plot points have been interesting because they make for interesting counterpoints to other diehard fanatics like Saw, Cinta, or even Luthen. They are steadfast in their belief that they are not only on the right side of history but also good people whom history will look on fondly. They don't see themselves as the bad guys, not even a little, and they are fighting to do what's right. Syril doesn't see himself as someone who is overstepping boundaries because he is doing them for the right reasons. It's all justified. There are extremists on both sides of the war in Star Wars, but Dedra and Syril show that extremists can exist in small remedial jobs that don't mean much. While there likely are plenty of people within the Empire who are just doing jobs and trying to do their best, who don't have the ability or strength to rebel, these two are reminders of what kind of damage even middle management with power and extremist views can do.

Mon Mothma, Luthen, And Saw: Leadership And Sacrifice In Andor

Throughout these last two episodes, the sacrifice of leadership weighs heavy on Mon, Luthen, and even Saw. For Mon, the sacrifice is the greatest. The Empire could be closing in on her, there is a chance that she could be exposed, and she needs help immediately. That means she will let her daughter enter an arranged marriage even if it is a custom that her daughter seems open to. There is also the implication, in the car, that she could be throwing her husband under the bus and using this gambling problem as a way to explain away their financial problems. Both of those people are her family, she got married extremely young, but for the sake of the rebellion, she is turning the other cheek. Mon's arc has been interesting because she hasn't been the strong leader of the rebellion that we have seen in previous Star Wars material. She is wavering; she isn't sure if this is the right thing to do, and she questions herself. These last two moves essentially prove the lengths that Mon is willing to go to, and now she can grow into the leader that will help end the Galactic Empire.

As for Saw, in episode eleven, we see him grappling with the same facts that Luthen did; how many men are worth the single source in ISB? Luthen does something insanely underhanded here and actually puts that burden of knowledge on Saw as a test to see if he can see the big picture. He calls it "war," which is what all of this is, and wars are not won in single battles, and certainly not that one. Both of these men are willing to do some very dark things in the name of the greater good, once again making them interesting counterpoints to Syril and Dedra. The things that Luthen and Saw do in the name of the greater good, including purposely making the Empire crack down harder on people, are morally questionable at best.

It's interesting that Luthen appears to have some sort of change of heart by listening to Maarva's speech. When Cassian confronts him, the best thing for him to do at that moment would have been to shoot him, but he doesn't. Instead, he sees the potential in Cassian and ends up recruiting him instead. Now Cassian, who knows that the people he cares about are off of Ferrix and going somewhere safe, can dedicate himself to the cause he believes in. This journey is not over, and it's clear that he still has a ways to go before he becomes the kind of man that will lose his life to the Death Star, which he ironically helped build, but the first steps have been taken. He's woken up.

Andor is by far the best Star Wars show thus far and ranks up with some of the best Star Wars material, period. It's a complex show that has taken the time to really explore what it means to live under a regime like the Galactic Empire and what kind of people that sort of tyranny breeds. It creates fanatics like Saw and Luthen, who are willing to sacrifice lives for the greater good. It creates hesitant but powerful people like Mon who are coming to terms with what they will have to give up for the cause. It creates dedicated soldiers like Dedra and Syril, who firmly believe they are on the right side of history and will do anything to prove it. And it creates reluctant but strong rebels like Cassian, that are the driving force behind why the Rebellion will ultimately win. While Luke using The Force is powerful, Andor proves that nothing is more powerful than the spirit of those unwilling to be broken. 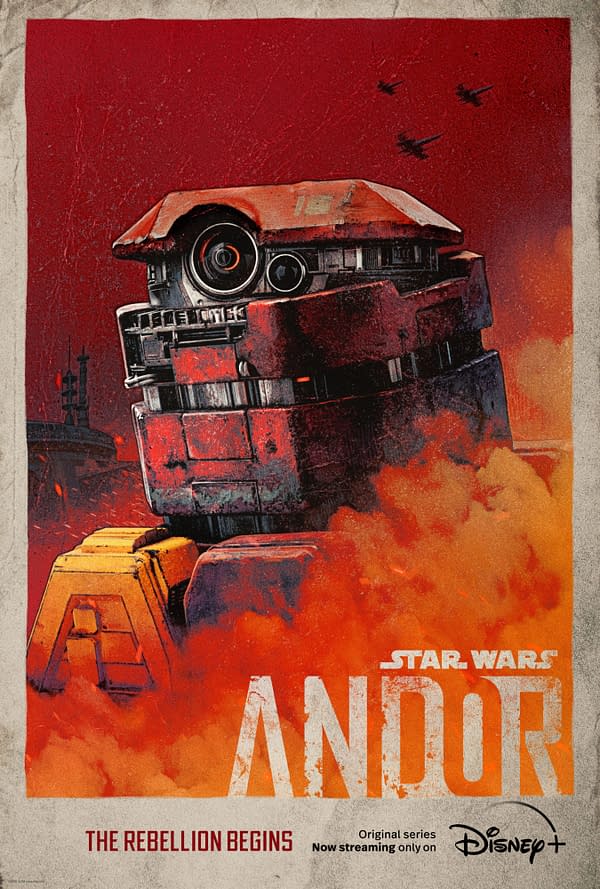 Review by Kaitlyn Booth
10/10
While Luke using The Force is powerful, Disney+ & Lucasfilm's Andor proves that nothing is more powerful than the spirit of those unwilling to be broken.

A New Poster For The Super Mario Bros. Movie Is Released

A new poster for The Super Mario Bros. Movie has been released, and it seems like a missed opportunity considering how generic it is.

The Fast and The Furious: Tokyo Drift Legacy Trailer Is Released

The next legacy trailer in the lead-up to the Fast X trailer release has dropped, and this time it's for The Fast and The Furious: Tokyo Drift.

In today's BCTV Daily Dispatch: The Flash, Justin Roiland, Fawlty Towers, "Bosch" universe, One Piece, @Midnight, The Last of Us, and more!