FOX's Bob's Burgers S12E15 "Ancient Misbehavin" made me want to attend classes about Greek history & how much truth there is in missing sleeping next to your partner. Warning, some spoilers may be waiting ahead for you so make sure to watch the episode first and then come back if you don't want anything revealed to you. Otherwise, see you on the other side of this image break…

Bob's Burgers had two stories that both help up fairly well in this episode. On one side was Louise, Millie, and Regular-Sized Rudy attended a new class at school that had an oddly balanced reward system. On the other side was Bob and Linda attempting to figure out sleeping situations while Tina and Gene tried to escape their mom's exhausting grasp. First off, the music in this episode (including the scenes they were featured in) was so much fun to watch and included some hilarious lyrics.

For this episode of Bob's Burgers, while I enjoyed a majority of the scenes featuring Louise's class, from the cool concept her teacher put in place to how the teacher handled the counterfeit situation, some parts felt off. I'm unsure if it was the odd tension included between Louise, Rudy, and Millie, but it didn't feel as complete of a story compared to Bob and Linda's in this episode.

What I enjoyed the most was Bob finding his comfort spot to sleep in and it ended up being the basement of the restaurant complete with holiday lights and some random warm bottles of beer. It was adorable how the two of them ended up acting as if they were back in their dating phase of the relationship with the texting and visiting Bob's basement digs. They ended up wanting to go back to how things were because they missed it, they missed sleeping beside one another. Bob's Burgers makes the point that time apart can be good, but there tends to be a desire to return and that's a healthy thing in a relationship. Linda missing Bob's farts was probably one of my favorite things. Let me know in the comments below what you thought of the episode! 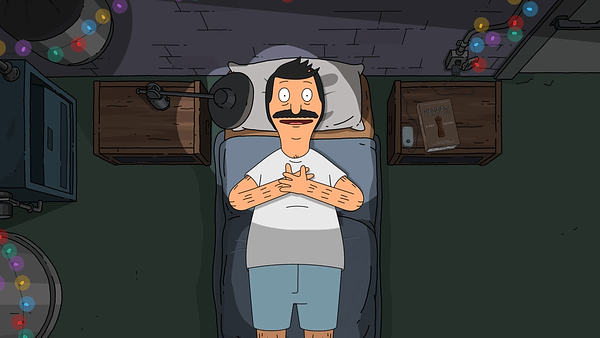 Review by Brittney Bender
8.5/10
FOX's Bob's Burgers S12E15, "Ancient Misbehavin'", almost had an excellent episode filled with great stories but there was still a little something lacking in Louise's scenes.
Credits
Network
FOX

Hangman Adam Page may have chased CM Punk out of AEW, but that didn't stop him from winning a title shot at Grand Slam Rampage.

In honor of Netflix's global fan event Tudum, here's a look at the best of the so-bad-they're-great bloopers from Stranger Things 4.

Though still a little too early for Season 4 details at Netflix's Tudum, The Umbrella Academy did release the full Season 3 blooper reel.