FOX's Bob's Burgers took a Thanksgiving turn towards mini-golf shenanigans for the Belcher family in "Putts-giving." Warning, some spoilers may be waiting ahead for you, so make sure to watch the episode first and then come back if you don't want anything revealed to you. Otherwise, see you on the other side of this image break…

Bob's Burgers often has a lot riding on their Thanksgiving episodes due to a history of memorable and hilarious stories surrounding Bob's (H. Jon Benjamin) favorite cooking holiday. After watching this episode, I went back and viewed the very first Thanksgiving episode of the series from season 3, "An Indecent Thanksgiving Proposal." I noticed something that is unique but also detracts from enjoying more recent Thanksgiving-related episodes of the series. These recent episodes involve a lack of balance with depth (or moral lessons) and a sassier sense of humor. Depending on the season, the series hasn't involved some minor characters that have added to the experience in the past, like Aunt Gayle (Megan Mullally).

Bob's Burgers has done a good job in the past of messing with Bob's cooking plans, but recently these barriers have become less and less interesting in terms of how they play out. A mini-golf-related episode is a fantastic type of scenario for the Belcher family, and I love the opportunity to see Linda's (John Roberts) competitive side, especially when she continues to snap back at Bob lovingly. It can be difficult to develop new scenarios for such a special episode, but there's a weird combination happening in these recent seasons when it comes to the Bob's Burgers Thanksgiving episodes. Some episodes have been better than others, but this recent one shows a clear lack of distinction.

Taquitos AND dancing yetis? This place has it all. pic.twitter.com/sxAnROe7Fw

It hurts to say, but I must be completely honest not only with those of you reading but also with myself. In this episode, there are glimpses of the great jokes and design expected of Bob's Burgers in most every episode, with each part of the mini-golf course including some fantastic and hilarious themes at each hole. It was great watching Bob and Tina (Dan Mintz) discuss their love and concern for Linda. And it was moments like this that would have made this a generally great fall-themed episode. But in the end, it included an ending scene with a turkey to disguise this as a Thanksgiving episode, and that felt like a major disappointment.

I highly recommend watching the many other great Thanksgiving episodes from Bob's Burgers, but this one barely felt like it belonged on that list. I miss the Thanksgiving songs and dark jokes mixed in with Belcher family lessons. If this were any other episode within the season, the plot would make more sense, and I'd rate it higher. While a generally fun episode within the thirteenth season, this episode doesn't deserve to call itself a Thanksgiving episode for a show that has given so much in the past to uphold this standard. I love the Belchers on any holiday, but this episode falls short of what could've been a moment to make a mark on the season.

Can someone pass the Bob's Burgers?

All of your favorite Thanksgiving episodes are available to watch on @Hulu! pic.twitter.com/H3iQmBKlsM

"If I Could Turn Back Crimes: Bail Bonds"

"Bored of the Flies"

No burgers of the day for this episode 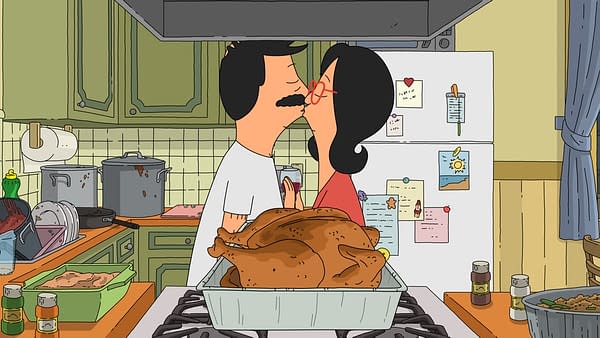 Review by Brittney Bender
5.5/10
FOX's Bob's Burgers S13E08 "Putts-giving" falls short and ends up being a decent story for the season while disguising itself as a Thanksgiving episode. There's a lack of balance in this episode's plot that ends up bringing disappointment instead of memorable moments.
Credits
Network
FOX