The major arc of season eight as much as Brooklyn Nine-Nine has been trying to redefine itself as a police-themed sitcom is the marital problems between Captain Raymond Holt (Andre Braugher) and partner Kevin Cozner (Marc Evan Jackson). The penultimate episode "Renewal" is basically the button on top of that arc since it lends itself to some attempts at finality with one of the characters. As with previous reviews, consider this your official "MAJOR SPOILERS AHEAD!" sign flashing.

At the conclusion of the previous episode "Game of Boyles", the two finally reconciled, and at the beginning of "Renewal", Holt announced the two will be renewing the vows since their initial reception was halted due to their uncertainty of how gay marriage was going to last. While the relationship on Brooklyn Nine-Nine was largely devoid of intense physical moments, creators Dan Goor and Michael Schur provided some fuller moments. Literally before season eight, we've never had an on-screen kiss between the two characters but sex has been alluded to before with how Holt screams "bone" when Rosa (Stephanie Beatriz) triggered the idea saying "[Holt and Kevin] need to bone]" due to their pent up frustration to comedic effect.

By contrast, when Rosa came out as bisexual to align with the actress' own coming out, she kissed her female partner who she was dating at the time. Previously, she had more physical scenes with Adrian Pimento actor Jason Mantzoukas when the two characters were dating. It seems like nitpicking now, but for a series that thrives and embraces its diversity, attention to detail for things like this tends to stick out more. While the whole argument from Raymond's side is how he feels his work is distracting from his relationship with Kevin, the squad tries to unravel a plot by Frank O'Sullivan (John C. McGinley) to undermine their CompStat data. Ray and Jake (Andy Samberg) try to infiltrate Frank's home and steal his laptop while trying to distract his mother (K Callan) while Terry (Terry Crews) and Amy (Melissa Fumero) try to distract Frank away at a parking garage for Billy Joel memorabilia.

The third part of the plan has remaining members of the Nine-Nine Charles (Joe Lo Truglio), Rosa, and Scully (Joel McKinnon Miller) keeping Kevin distracted from finding out he's working a case. I'm glad they at least didn't bother to keep up the charade of having Dirk Blocker's Hitchcock sticking around via conference again. As expected, the rom-com action drags out to expected proportions with the equally predictable ending atypical of the genre. As much as the final season has been all over the place, guess you have to give credit to the actors for what they have to work with during its identity crisis. The final two-part finale of Brooklyn Nine-Nine airs on September 16 on NBC (with the series' retrospective "Nine-Nine Day" streaming on YouTube on September 9). 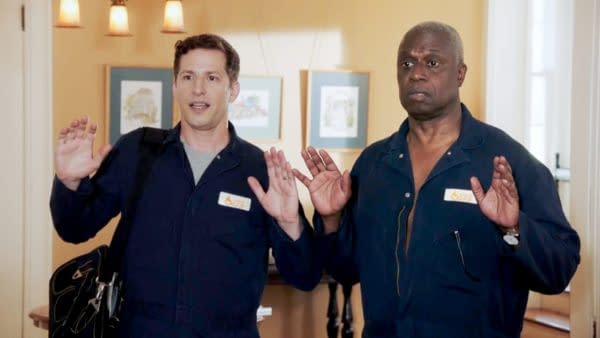 Tony Khan is eyeing an international expansion for AEW now that the world has gotten bored with the COVID-19 pandemic and loosened restrictions.