¡Hola, amigos! It is I, your El Presidente, the greatest authoritarian dictator the world has ever seen and if I do say so myself, a fine reviewer of the best trashy reality television. Today, comrades, it is my mission to tell you about all the drama that happened in this week's episode of Double Shot at Love. Snooki and J-Woww guest-starred on Double Shot at Love Season 3 Episode 8 "Tea Time with Snooki and J-Woww." And let me be honest with you: the tea was actually tequila.

MTV brought out Jersey Shore's two biggest stars to help Vinny and Pauly's side project, so naturally, this episode was heavily focused on the women. First, while sipping tequila from tea-glasses, Nicole and Jenni interviewed each of Vinny's prospective love interests one by one to determine which one they should set him up with. By the time the affair was over, Snooki and J-Woww were both wasted and they had decided on Staten Island native KP to earn a date with Vinny.

While Vinny and KP had their date, in which KP earned a kiss, Snooki, J-Woww, and Nikki held a slumber party with the rest of the contestants, which gave them an up-close look at the divide in the household between mean girls Akelia, Danielle, Peyton, and Erika, the target of their bullying, Claudelia, and the rest of the girls who privately support Claudelia but don't say anything in front of the other girls for fear they'll be bullied too. After the slumber party, the mean girls heard the other girls talking too loudly about it and stormed Claudelia's bedroom, forcing security to intervene.

Hey, comrades, it may seem harsh, but that's how you seize and hold onto power. I can't tell you how many times I have had to bully my protege, Maduro, just to make sure all the other dictators know that I am not a person to be ****ed with. The American CIA is too afraid to even try something because they don't want any of this.

Jenni and Nicole informed Vinny of the situation, so he called all of the contestants to the elimination dinner. However, after witnessing awkward silence for a few minutes, Vinny dismissed everyone but Claudelia and then eliminated her, blaming her for being the center of all the drama. Trust me, comrades, she got off easy. I would have had thrown in the dungeon indefinitely. Haw haw haw haw!

While the outcome this week wasn't exactly fair, it did make for pretty good television. Soon, Vinny will have to start making some tough decisions, but not as tough as remembering the names of the women he's dating, since the teaser for next week's episode shows him accidentally call Erika Hayley, leading to more tears and more drama. Until next time, amigos: socialism or death! 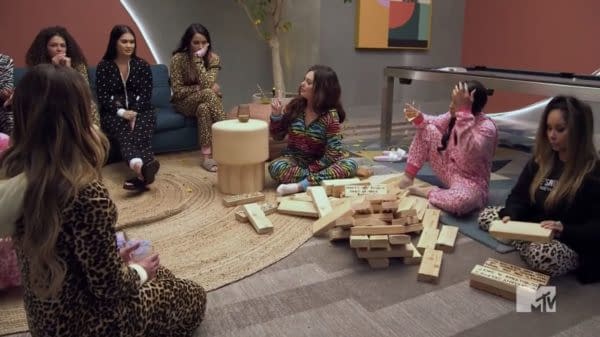 Review by El Presidente
7.5/10
While the outcome this week wasn't exactly fair, it did make for pretty good television.