¡Hola, mi amigos! It is I, your El Presidente, the greatest authoritarian dictator the world has ever seen and if I do say so myself, a fine reviewer of the best trashy reality television. Today, comrades, it is my mission to tell you about all the drama that happened on this week's episode of MTV's Double Shot at Love. Double Shot at Love Season 3 Episode 10 "Vinny's New In-Laws" aired on MTV on Jerzday, and just like this week's episode of Florbama Shore, it was a very family-focused episode… literally!

That's because the theme of this episode was a visit from the friends and family of the final six women competing to win the love of Jersey Shore start Vinny. Well, five women, technically, because Akielia's mom was unable to make it until the next episode, which was sad for her, but good for us because it wouldn't be an episode of Double Shot at Love without watching somebody break down in tears.

One highlight of the friends and family visits was Danielle's father, a man at least two feet taller than Vinny who mercilessly mocked the Keto Guido, claiming Vinny did not meet the height requirements to ride his daughter. To counter, learning it was recently his birthday, Vinny gifted Danielle's dad with a birthday cake and the Happy Birthday song, which did appear to soften him up a little bit. It's a good trick, comrades. Whenever Putin comes to visit, I keep a freshly-baked chocolate cake in the kitchens just in case he shows up in a bad mood and thinks about having the KGB assassinate his old pal. No, Putin isn't usually cheered up by cake. But when he doesn't like the cake, I have my head chef tortured and executed, and that usually cheers Putin right up. Haw haw haw haw! That Putin! Such a card!

The other highlight of the visits was Peyton's friend, a fellow social media influencer who scoffed at Vinny's chances of scoring Peyton outside the confines of a reality TV show, revealed that she only dates famous rappers, and further fueled Vinny's fears that this beautiful woman is only appearing on a reality TV show to compete for the love of a Staten Island chooch… for the clout! That's why Vinny invited Peyron, Erika, and KP to his elimination dinner, only to keep the other two and eliminate Peyton, who was not happy and vowed revenge.

That leaves just five contestants, comrades, as this season seems like it barely started but is already nearing the end. Overall, the episode was fun. It's always nice to see Vinny squirm, and the Peyton stuff tickled my drama bone. Until next time, my friends: socialism or death! 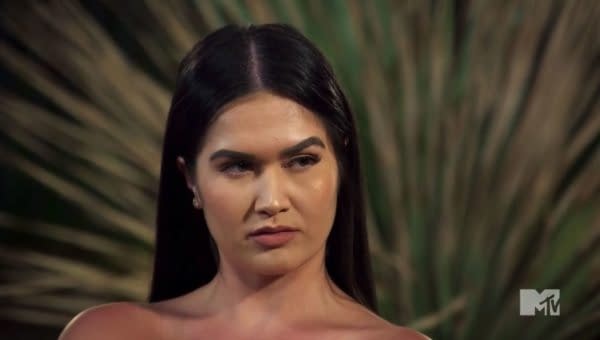 Review by El Presidente
6/10
Overall, this episode of MTV's Double Shot at Love was fun. It's always nice to see Vinny squirm, and the Peyton stuff tickled my drama bone.