In a week where Dynamite beat Raw for the second time in the ratings, The Chadster was in no mood to watch AEW Rampage last night. However, Bleeding Cool TV editor Ray Flook apparently doesn't care that The Chadster can no longer have sexual intercourse with his wife thanks to being forced to watch and review Dynamite and Rampage every week. The Chadster can't say for certain that Ray Flook is in cahoots with Tony Khan, but it is quite suspicious that both have gone out of their way to ruin The Chadster's life. But while The Chadster may be unable to consummate his marriage, he is a consummate professional when it comes to wrestling journalism, so as usual you can all expect an unbiased report on this week's show unparalleled on the entire internet, as The Chadster is one of only two completely unbiased wrestling journalists out there, alongside Ryan Satin.

AEW Rampage made some changes to the commentary team this week, with Ricky Starks joining Taz, Chris Jericho, and Excalibur at the table. The Lucha Brothers defended their AEW Tag Team Championships against The Butcher and The Blade in a very fast-paced, exciting opening match. What is not fast-paced and exciting is The Chadster's love life now that AEW's constant delivery of entertaining wrestling shows and great ratings performances have rendered The Chadster sexually impotent. But is anyone holding Tony Khan to account for what he's done to The Chadster? Hopefully the Dark Side of the Ring folks will contact The Chadster soon.

The Lucha Bros won after Penta, who was tied to the ring ropes by his mask, took the mask off, covered his face with his hands, and superkicked the Blade to allow Rey Fenix to roll him up for the win. After the match, Proud and Powerful saved their longtime rivals from a beatdown by the Hardy Family Office.

Pre-recorded interviews with Kenny Omega and Daniel Bryan promote their match at Grand Slam next week, rubbing salt in The Chadster's wounds. Why! Whyyyy! This match is going to beat Raw in the ratings for sure!

Anna Jay faced The Bunny while Ricky Starks pined over The Bunny on commentary, claiming to like her "screaming" and "vacant stare." Anna Jay won with a rollup in an average but passable match, and Penelope Ford and Tay Conti got in the ring for a post-match brawl that ended with Ford knocking both women out with a pair of brass knuckles. The Chadster feels like he's been punched in the nads by brass knuckles every time he's forced to watch an AEW show, thanks to all the disrespect they show Vince McMahon and WWE.

After the match, Matt Hardy announced more matches for AEW Grand Slam next week. Penelope Ford will face Anna Jay one-on-one, and Private Party and The Butcher and The Blade will fight The Lucha Bros and Proud and Powerful. Great! As if the cards for next week's Dynamite and Rampage weren't already stacked. What is Tony Khan trying to do to The Chadster?! Kill him?! This is attempted murder! Auuggh!

Hardy then pointed out a "fan" dressed as Orange Cassidy at ringside. Hardy pulled the guy over the barricade, brought him in the ring, beat him up, and cut his hair before Orange Cassidy came out to make the save, though it would have probably been more helpful to the fan if he did it before his hair got cut. That being said, the fan got off lightly, since he only lost his hair, while watching AEW has caused The Chadster to lose his sexual potency.

If you dress up as that bum @orangecassidy at #AEWDynamite or #AEWRampage, I'LL CUT YOUR HAIR TOO! pic.twitter.com/MfTYOql6VK

Ruby Soho and Britt Baker had a promo battle ahead of their championship match next week. The Chadster felt that Ruby's promo was very disrespectful toward WWE because she implied they held her back there. In another sore spot, Ruby brought up Britt Baker's sexual relationship with Adam Cole, which is a double burn on The Chadster because The Chadster can no longer have a sexual relationship with his wife thanks to AEW and because Adam Cole is partially responsible for that because he betrayed WWE and jumped from NXT to AEW. The Chadster doesn't even know who to root for in this match, because both women are partially responsible for The Chadster's pain, though ultimately the blame lies at the feet of Tony Khan and possibly Ray Flook for making The Chadster watch this in the first place.

Mark Henry did his backstage interview thing, which is very disrespectful because Mark got famous in WWE and now uses that fame to betray them and help their rival. Additionally, Miro referenced sex with his wife in the promo, another personal attack on The Chadster orchestrated by Tony Khan. Then Miro defended his TNT Championship against Fuego del Sol. Nobody thought that Fuego had any chance of beating Miro, even having put his brand new used card on the line in the match. Even still, del Solo is such a charismatic performer and the match worked so well that even The Chadster was invested in seeing the underdog overcome the odds and pull off an upset victory, which of course is totally unfair because now Tony Khan is making the Chadster into a traitor by enjoying AEW! Auughh! Ultimately, Miro got the win and punished Fuego after the match by putting the car keys in his mouth and then putting him in the Game Over. Sammy Guevara came out to make the save and start up a feud with Miro. Dang it! That's actually a great pairing, which is the most unfair and disrespectful thing! By knowing about the wrestling business, Tony Khan just proves he knows nothing about the wrestling business!

The Chadster was thoroughly offended by another unfair and disrespectful episode of AEW Rampage, which is finding its groove as a lean, action-packed addition to AEW Dynamite. The Chadster doesn't understand what he ever did to deserve the world being against The Chadster like this. WWE is on the decline, AEW is on the upswing, and The Chadster is absolutely miserable. How much worse can it get for The Chadster? AEW Grand Slam next week will show us, and The Chadster is dreading it already. 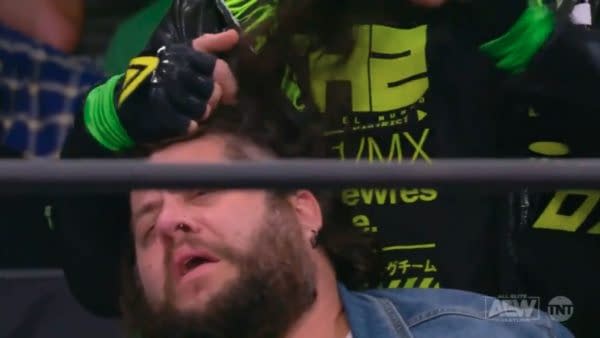 Review by Chad McMahon
8.5/10
The Chadster was thoroughly offended by another unfair and disrespectful episode of AEW Rampage, which is finding its groove as a lean, action-packed addition to AEW Dynamite. The Chadster doesn't understand what he ever did to deserve the world being against The Chadster like this. WWE is on the decline, AEW is on the upswing, and The Chadster is absolutely miserable. How much worse can it get for The Chadster? AEW Grand Slam next week will show us, and The Chadster is dreading it already.