For Hollywood success stories, Game of Thrones is a classic case of David becoming a Goliath. It started as a dream from George R. R. Martin, who dared to create on his own terms, making the industry believers in his grand vision of his world of "A Song of Ice and Fire". Author James Hibberd chronicled the series for various outlets like Entertainment Weekly and The Hollywood Reporter from Martin's early TV writing where his creativity clashed with the more frugal television studios. Jaded by the process, the author decided to dedicate his writing to his novels creating such lavish and grandiose worlds that no studio would ever tackle optioning his work for the screen.

Two young and green visionaries in David Benioff and D.B. Weiss were more than happy to take on that challenge meeting Martin, discussing his work, and the painstaking process of finding a platform that would take a chance on them that eventually took them to HBO. Hibberd's journey through Game of Thrones in Fire Cannot Kill a Dragon doesn't leave any stone unturned from its humble beginnings and compromises Benioff and Weiss had to make throughout the adult high fantasy series. The book breaks down things from casting choices, TV-centric deviations from the novels that cut certain book characters and parts out, its eventual overlapping of the books, and trying to match the demands of Martin's vision to budget and time constraints.

The most engaging aspect of Fire Cannot Kill a Dragon is the cast and crew interviews breaking down key moments of the show from their most casting/hiring to their final scenes and how they felt about them. Most of the core cast that participated from the first to final seasons participated in the book. Some notable omissions are Olenna Tyrell actress the late Diana Rigg and High Sparrow actor Jonathan Pryce but are mentioned. It's particularly engaging knowing how the biggest stars of the series grew up and how far along they came from the show like Stark actors Kit Harington, Sophie Turner, Maisie Williams, Isaac Hempstead Wright to Daenerys actress Emilia Clarke.

I'll give credit for Hibberd for going above and beyond for Fire Cannot Kill a Dragon, because he could have just stopped at the work of the cast and crew, but he also dove deep into the mixed fan reaction of the controversial final eighth season and the cast and crew's internal feelings on their arcs and show's end. It even touches on the coffee cup controversy. It's a definite must-read for anyone who's a fan of the HBO series and Martin's works that goes deep into the minds of the artists from filming to handling the fame that came from one of the most relevant pop culture franchises of the 21st century.

Fire Cannot Kill a Dragon: Game of Thrones and the Official Untold Story of the Epic Series 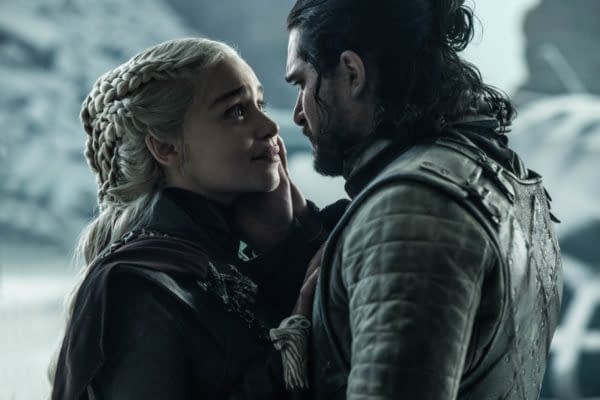 The Orville: Yes, We Turned S03 BTS Look Into A Game- You're Welcome

The Orville co-producer & editor Tom Costantino shared a Season 3 BTS look. So we made it into a game. Because why not? Just humor us...

Hosted by Moment House, Morbid Cinema Macabre was a unique event that proved to podcast audiences that virtual experiences are worth it.

In the following preview for the next episode of The CW's Superman & Lois, Clark's visions worsen- is Superman now a national security risk?

Returning for Season 2 on March 25, Netflix released a new set of preview images for its adaptation of Julia Quinn's Bridgerton novels.

Beavis and Butt-Head Clash In This "Murder Site" Production Cel

Mike Judge's Beavis and Butt-Head clash in this "Murder Site" production cel which is now available over at Heritage Auctions. Sponsored.