Hey gang!  It's officially spooky season and that brings one thing to the mind of wrestling fans: Mae Young winning the bikini contest at the 2000 Royal Rumble!  No, nothing tonight will be quite that scary, but NXT will be playing with our nostalgic feels as they again resurrect the beloved Halloween-themed WCW event, Halloween Havoc.  And it will be a pretty big show tonight, with nearly every title on the line and the show really having the potential to shape NXT 2.0 going forward in a way we haven't seen yet in the new era of the developmental brand.  Enough out of me, let's get to the scary (hopefully scary good) action of this year's NXT Halloween Havoc.

A really exciting and full-throttle Ladder Match to kick-off the show.  Everyone gets some nice spots to shine here and they all take some decent risks in tonight's opening bout.

There are two standout visuals here.  The first is Pirotta continuing to really establish herself as a powerhouse in the Women's Division and doing so here again tonight when she Powerbombs Dolin through a ladder in the corner.

And then there's the big bump of the match, which is where Shirai is on top of a tall ladder in the ring and is dumped over by Hartwell to the outside and onto another ladder.  It's a scary moment, but it looks like everything went according to plan here.

All good things come to an end though, as Dolin and Jayne double team Hartwell on the ladder, allowing Dolin to grab the belts and we have new Women's Tag Champs!

Here's some slapstick for those of you who need it in your wrestling shows.  Lumis, Gargano, and Zombie Ref (?!?!) have created a Halloween-themed Home Alone setup here for Williams and Hayes.

There are tricks and traps and time wasted.

We now get our  Halloween Havoc host Grayson Waller (event though LA Knight beat him last week and was supposed to host?).  Waller is saying how hot women are in their Halloween costumes until Joe Gacy wanders in and lectures him on objectifying them.

In an unannounced Halloween Havoc match, we get Gacy squashing poor Malik Blade, who has become the Barry Horowitz of NXT 2.0.  The match isn't anything until Gacy tosses Blade outside, where he's grabbed by the throat at ringside by Harland.  Gacy says something to Harland, which causes him to release Blade and throw him back in the ring, where Gacy nails him with the Handstand Springboard Lariat for the pinfall.

We now head backstage for the roster's Halloween Havoc party, where we see many familiar faces wearing costumes and having fun.

Next, we get a video promo from Kay Lee Ray, trying to make sense of where the hell she has been after arriving in NXT months ago with a huge push, only to disappear.  Well, I guess she's coming back soon and appears very disgruntled.

Diamond Mine hits the ring now and issues an open challenge for Roderick Strong here tonight at Halloween Havoc.  Odyssey Jones takes them up on it and we have a match!

A decent one here and an interesting look at how the big man Jones does against a very technical opponent.  There's some good back and forth but after Jones hits a big slam on Strong, The Creed Brothers jump to the apron to distract him, allowing Strong to recover and hit Jones with a leaping knee to the face for the pinfall.

We head back to the party now as Halloween Havoc rolls along.  This time we look in on Tony D'Angelo again pressing Lash Legend to have him on her show, which she finally relents and agrees to for next week.  Robert Stone (dressed as Elvis) gets pissed at Xyon Quinn for stepping on his shoes.  Quinn finishes his drink and chokeslams Stone through the snack table.

It's another "spin the wheel" match, which Gonzalez does pre-match and it lands on "Chucky's Choice".  That allows everyone's favorite killer movie doll/WCW superstar Chucky to pick the stipulation.  He chooses a "Trick or Street Fight Match", which WWE conveniently has a graphic ready to go of:

As for the match itself, these two actually have a pretty decent hardcore match here.  Lots of big power moves and they do some pretty fun things with the weapons surrounding the ring.

There's one kind of dumb part where Gonzalez just like appears on top of the announce table wearing a Jason Vorhees mask and sprays Rose with a fire extinguisher.  The mask was just an odd visual and didn't work for her character.

In the end though, we see that eery cloaked figure from the graveyard vignettes in recent weeks appear at ringside with a shovel, which they use to clock Gonzalez in the back with, followed by Rose hitting the running knee to her face to get the pinfall.

After the match, the cloaked figure stands over Gonzalez and pulls back their hood to reveal that it's Dakota Kai (duh!), who has gotten revenge on her former best friend.

Grayson Waller heads to the ring again, but this time he's met by LA Knight, wearing the same Dracula costume as him, who accuses Waller of sabotaging his car and preventing him from hosting Halloween Havoc (ahhh, now it all makes sense!).

As they argue, Solo Sikoa makes his way out for his NXT debut.  The street fighter enters the ring looking ready to brawl and Knight shoves Waller towards him.  Sikoa Belly-To-Belly Suplexes Waller over the top rope to the outside, as Knight clears out.

MSK and Imperium are in the ring when the wheel is spun, where we find out it'll be a "Lumberjack O'Lantern Match".  NXT superstars (in their Halloween costumes) file out to surround the ring.  Barthel is tossed to the outside early and everyone gets onto a dogpile on him, before Aichner rescues his partner.

We get the match going here and each team hits their spots.  There's a fun segment where Lee goes for a leaping attack at Barthel, who's seated on the top turnbuckle.  Barthel ducks the attack and Lee goes flipping over the top to the outside into the Lumberjacks.  Carter then climbs the turnbuckle to hit Barthel with a top rope Cutter to the outside onto the Lumberjacks.

Eventually after much fast-paced back and forth, Aichner hits Lee with a Brainbuster and they follow that up with the Imperium Bomb to Lee for the pinfall.

A fantastic heavyweight battle that we haven't seen in WWE quite a while!  Both guys bring it on the big stage here to earn the main event spot.  Everything here is heated and hard-hitting and you at no point have a clue who's going to win.

They eventually head out of the ring and pull back the floor padding, only for Ciampa to DDT Breakker onto the concrete floor.

He drags the now busted-open Breakker back into the ring to hit him with the Fairytale Ending, but Breakker kicks out at two.  He hits Breakker with a running knee to the head, followed by another Fairytale Ending to finally put the big man away.

A really fun match and it solidified that Bron Breakker is a legit main event star in the making.

And that's it for the 2021 NXT Halloween Havoc folks.  A fun show that probably shouldn't have been on free TV with some really good matches and a bunch of new Champions. 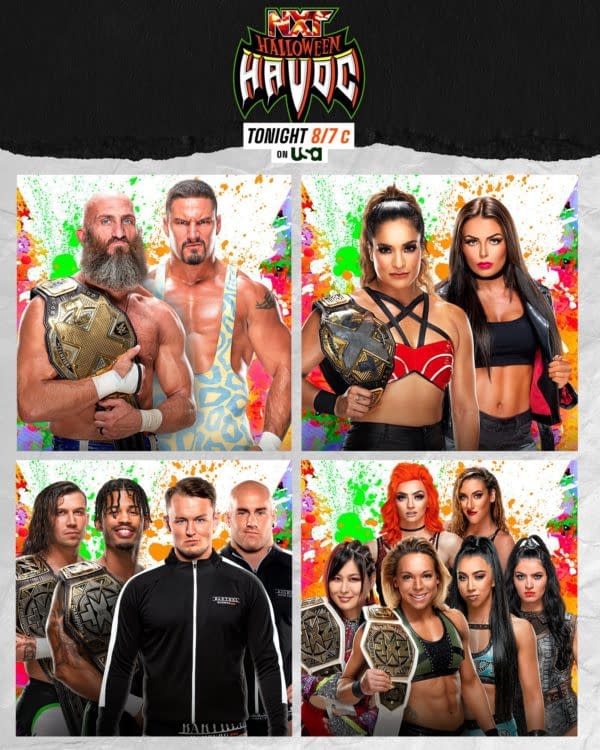 Review by Ryan Fassett
7.5/10
This was a really solid show! The matches were good to really good and we got a handful of new champions, which will serve to really shake things up going forward. Some of the comedy stuff got to be a bit much, but the good definitely outweighed the bad here and I think the overall NXT product should be more interesting after it.

Our recap of this week's NXT 2.0 on USA, which featured Santos Escobar and Tony D'Angelo battling for bragging rights and control.

Our preview for tonight's NXT 2.0 on the USA Network, where we'll see some tag team matches with In Your House implications.

WWE SmackDown Recap 5/13: Was It A Killer Friday The 13th Episode?

Our recap of this week's WWE SmackDown on FOX, which saw The Usos answer RK-Bro's challenge to unify both of the Tag Team Championships.

WWE SmackDown Preview 5/13: What Will The Bloodline Look To Next?

Our preview for tonight's WWE SmackDown on FOX, where RK-Bro will march in demanding an answer from The Usos to their challenge.

Our recap of this week's episode of NXT 2.0, where Cora Jade faced Natalya and they paid homage to a Stone Cold and Bret Hart classic.

Our preview for tonight's episode of NXT 2.0 on the USA Network, where Cora Jade will take on her childhood idol, Natalya.