Is J-Woww really trying to ruin Angelina's marriage? Will Vinny be able to recover from the tragic loss he suffered while filming this episode? Are Nikki and Pauly D trying to get on Elon Musk's spaceship? And can Angelina go a full twenty hours without reacting to Vinny?! Find out in this recap of Jersey Shore: Family Vacation Season 4 Episode 20!

Greetings, comrades! It is I, your El Presidente, and there's no need to worry, despite what happened in Haiti this week. I have doubled by security detail and had all dissidents rounded up and executed just to be on the safe side, so your El Presidente is safe and sound and ready to bring you all the glorious details of the latest episode of the greatest show on television, Jersey Shore: Family Vacation! This week's episode was titled "Italian Ice," the punchline to a Pauly D joke about what one calls five guidos in the snow.

This week's episode continued the roomies' Poconos vacation, picking up where the show left off last week just after Ronnie and Mike showed Angelina the doorbell cam footage of her acting out in Old Bridge. Angelina refused to take any responsibility for the footage and instead blamed the whole thing on J-Woww. In a reversal of roles, J-Woww actually seemed to be a little scared of Angelina this episode, but the two did eventually manage to find some time to speak alone. Jenni explained that she only wanted to protect Angelina from the violating experience of having videos posted on TMZ. Angelina thought Jenni could have possible spent less time dragging the whole thing out for several episodes of reality TV and just sent the videos directly to her. But what fun would that be, comrades? Haw haw haw haw!

The beef may have been squashed, but that still left room for some friendly competition. Angelina and Jenni entered into a bet this episode that Angelina couldn't ignore Vinny's teasing for 24 hours. If Jenni wins, Angelina must run through the snow in a bikini. If Angelina wins, she gets to push Jenni into the pool. By the end of the episode, Angelina still hadn't cracked, though we will see what happens next week. Amigos, I once made a similar bet with my protege, Maduro, that he could not ignore the American CIA's attempt to destabilize our government for one month. He lasted three days before a close call during a coup attempt sent him flying into a rage. I was laughing so hard, comrades, I could barely hear the wails of the families of Maduro's political opponents that he imprisoned to make himself feel better. Haw haw haw! Good times.

Vinny and Angelina's friendly feud may be on a cease-fire, but that didn't stop Vinny from engaging in a food fight in the bowling alley after Pauly D pegged him the head with a pretzel. Vinny returned fire, but it was Nikki who was struck with a flying cup of nacho cheese. For revenge, she dumped cheese all over Vinny's jacket, putting the Keto Guido in a sour mood and causing the show's producers to scramble to find a good dry cleaner.

At their advanced ages, the roommates can no longer party all night long at the club like on the original Jersey Shore, so they had to resort to other activities during the Poconos trip. One of those was a basketball game between all the guys in which everyone except 24, with that pro wrestling cardio, was gassed within five minutes. Zak was polite enough to not mention it, and he got in some good bonding time with the boys as well. The entire group also did some snow tubing, which the guys continuously escalated into more dangerous maneuvers until 24 nearly ended up in a frozen lake. The exact same thing happened to Vladimir Putin at the Dictator's Club winter retreat a few years ago, but he tried to play it off like plugging topless into ice-cold water was no big deal. He was all like, "What do you m-m-m-m-m-mean? I'm not c-c-c-c-cold." Classic Putin. He was so embarrassed he forgot to have any of his political rivals poisoned for a whole month. Haw haw haw haw!

Speaking of 24, it turns out that he has not yet gotten Jenni pregnant, even though Jenni admits the pair do not use any birth control. The roomies bet they'll be having another kid any day now. Nikki revealed she wouldn't be opposed to getting married and starting a family with Pauly D but quickly pointed out she could easily wait ten years before any of that, so as not to scare off the notoriously commitment-wary Pauly. Even still, they are quickly evolving into the show's cutest couple. But the title of cutest throuple is still up for grabs, and Vinny is working hard at that one, even offering a threesome with Angelina to Chris this week.

Jersey Shore: Family Vacation continued to be the Angelina show this week, with her marital drama taking center stage all night, the feud with Jenny, and the bet involving Vinny. Everything else took a back seat, and it's interesting to see Angelina gaining more confidence in her role. With Ronnie's issues likely off-limits for the show, at least for the foreseeable future, Angelina and her beleaguered marriage are carrying the drama portion of the show, and Angelina knows it. In a surprise twist, nobody so much as mentioned Burger King this week, so expect the whole crew to spend a third of next week's episode chowing down on Whoppers. 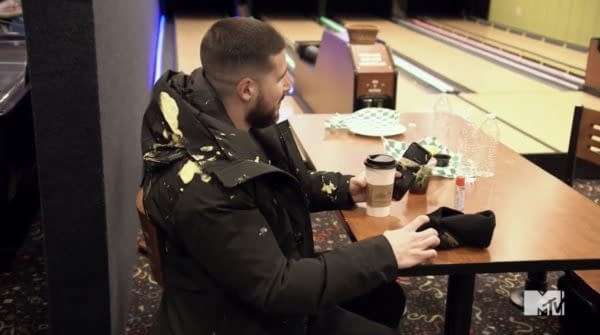 Review by El Presidente
6.5/10
Jersey Shore: Family Vacation continued to be the Angelina show this week, with her marital drama taking center stage all night, the feud with Jenny, and the bet involving Vinny. Everything else took a back seat, and it's interesting to see Angelina gaining more confidence in her role. With Ronnie's issues likely off-limits for the show, at least for the foreseeable future, Angelina and her beleaguered marriage are carrying the drama portion of the show, and Angelina knows it.
Credits
Network/Streaming Service
MTV

In today's BCTV Daily Dispatch: What If...? review, Dark Side of the Ring, Around the World in 80 Days, Hit-Monkey, Supergirl, Heels & more!