Last week we saw Kay Lee Ray dismantle Toxic Attraction one by one until she was left with just NXT Women's Champion Mandy Rose in her crosshairs.  She then proceeded to torture and humiliate Rose until the Champion relented and agreed to a title match with Ray.  That brings us to this week, where Ray will finally get her one-on-one title shot against Rose as she hopes to repeat her NXT UK success here in the U.S.  But will it be a fair bout or will Rose's teammates Gigi Dolin and Jacy Jayne get involved to help her retain?  Let's find out.

This was a damn good one.  Non-stop action right from the opening seconds, both teams pulled out all the stops here and found new gears to test each other to the end.  It was a very well orchestrated match, where they didn't forget the damage done from earlier (GYV early on hurts Brutus' throat and this was played with throughout).  The back and forth action was intense and exciting and you honestly didn't know who would take this one.

Eventually though, everyone winds up in the corner and Julius hits a visually stunning leaping Superplex on Drake, which allows the Creeds to hit their double team combo on Gibson for the pinfall to head to the Dusty Cup finals.  Great tag match!

We now go to a backstage interview with Cora Jade, where she's interrupted by the team of Valentina Feroz & Yulisa Leon, who warn her not to get too confident.  This brings over Jade's partner Raquel Gonzalez, who argues with them in Spanish for the rest of the segment.

It's a battle of two of NXT's silliest gimmicks here and after we get through the opening comedy, it's not terrible.  Both women are fully committed to their characters throughout and if you're going gimmick-hard, that's the only way to do it, so good for them.  The much more seasoned Choo basically wrestles around the still novice Stratton for the vast majority of this one, until Stratton breaks a nail, which sets her off and she hits a couple of varried strikes (no actual moves) to put Choo away.

We now go to a backstage interview with Pete Dunne about his cage match next week with Tony D'Angelo.  Dunne promises to finish Tony D next week.

Not a bad match here, but it is very slow and goes on way too long.  Eventually, Tony D appears at ringside and tries to hit Dunne with a crowbar, but Dunne dodges it and returns to the ring to hit Anthony with The Bitter End for the pinfall.

After the match, Tony D tries to choke Dunne, but Dunne escapes and then fills the ring with weapons, before challenging Tony D to up their cage match to a weaponized cage match, where weapons will be all over the cage.

Next, we go backstage to Zoey Stark trying to tell Io Shirai that she needs to find a new partner for the Women's Dusty Cup tournament.  Stark says they need to find someone as crazy as Io and she agrees.

We then go to Wendy Choo nursing her wounds, when she finds Dakota Kai messing with her clothes.  Kai says some weird crap and wanders off.

This one reminded me of back in the day, when The Rock would face someone like Kane or The Undertaker on Raw Is War and even though he was outsized and facing a monster, he would usually open the match by getting right in their face and trash-talking them as if they were equal to his size or less.  LA Knight does the same thing here and it really works.

The match itself is fine.  They do the normal kind of big man versus normal guy stuff.  Waller eventually hops to the apron and removes one of the turnbuckle pads, which the ref sees and begins arguing with him about.  This allows Knight to get a cheap thumb to Sanga's eye and as Sanga runs at him in the corner, Knight dodges and smashes Sanga into the exposed turnbuckle and hits a jumping Neckbreaker to get the pinfall.

Immediately after the bell, Knight and Waller begin fighting in the ring until Knight takes over and hits him with a BFT to end it.

We now go to a backstage interview with Duke Hudson, who mocks Dante Chen for not actually challenging him when he said he would.  Hudson then sends a message to Indi Hartwell before walking off.

Next, we go to Wade Barrett in the ring as he hosts the "NXT Championship Summit" between NXT Champion Bron Breakker and his challenger for the title at NXT Vengeance Day next week, Santos Escobar.

Breakker and Escobar sit across from one another at a table as Barrett interviews them.  Breakker offers to flip the table and begin fighting right now, but Escobar calmly mocks him and says he has him totally under control.  They're interrupted by Dolph Ziggler, who struts out to the ring.

Ziggler sets up at the table, putting his feet up on it, and lectures Breakker, continuing their online feud as of late.  Breakker tells Ziggler he'll handle him after Escobar.  Ziggler speaks down to him and lists his accomplishments on the main roster before saying he does not have the NXT title on his resume.

Tommaso Ciampa now heads out to the ring to interrupt Ziggler and gets in his face.

Escobar now explodes on all of them, saying that once he becomes NXT Champion, he'll handle everyone else.  Ciampa says no matter who wins, he's next in line.  Ziggler then starts mocking Ciampa for staying in NXT, which leads to him slugging Ziggler out of the ring and as they fight up the ramp, all of Legado del Fantasma jumps Breakker.  He fights off Wilde and Mendoza and then goes for Escobar, but the others return and they slam him through the table.

We next go backstage to find Grayson Waller and Sanga leaving.  Waller claims LA Knight broke the restraining order against him and next week, he's having him arrested for it.

This one… isn't great.  It never feels like it gets going and there's lot of sloppy missed targets throughout.  Sarray eventually finishes off Kai with a pinfall.

Next, we go to a video package of NXT North American Champion Carmelo Hayes and Trick Williams at a barber shop talking about his match with Cameron Grimes.

We next go to find Indi Hartwell and Persia Pirotta discussing things, until they're interrupted by Gigi Dolin and Jacy Jayne, who bring up that Hartwell used to date Duke Hudson or something?  Anyway, they wind up brawling.

We follow that up with another stupifying hype package for Nikkita Lyons, and wow, this one just looks worse by the week.  This time, we learn she's a martial arts/singing master because people used to break into the van she lived in as a kid.  Someone wrote this and thought it was good.  These are truly the darkest times in wrestling history.

And if that wasn't stupid enough, then we get Brooks Jensen asking out Kayden Carter.

This match is fine, but it's lacking an intensity that the opening tag match had.  The teams here didn't come off as seriously and as desperate to win and I think that's why it wasn't as engaging.

Next, we get a video package of Cameron Grimes hyping up his NXT North American title match next week against Carmelo Hayes.

We see Toxic Attraction making their way to the entrance backstage when they're jumped by Indi Hartwell and Persia Pirotta.  Refs and officials get involved and make Mandy Rose head out for her match.

Not a bad match here.  The hate between them comes across well and the action is a good mix of brawling and impact stuff, all of which serves to make it look like they really want to hurt their opponent.  Eventually, as Ray is perched atop the turnbuckle, Dolin and Jayne run in through the crowd and push her off, allowing Rose to hit the running knee for the pinfall.

After the match, Toxic Attraction grabs Ray's bat and are about to beat her with it, but Io Shirai runs in to stop them and clears them out of the ring with Kay Lee Ray.  The duo stands side by side, alluding that they will team up for the Women's Dusty Cup Tournament.

Alright so that was a pretty good episode of NXT 2.0 tonight.  It was almost all wrestling action and very little backstage skits and comedy nonsense.  The show opened with an absolute killer tag match and closed strong with a decent title match, so there's not really too many complaints here.  Hopefully they follow the same plan next week with NXT Vengeance Day. 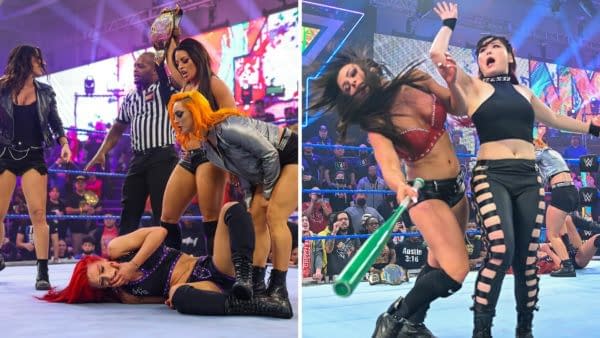 Review by Ryan Fassett
7/10
A pretty good episode here. The vast majority of the show was matches and like I always say, that's when NXT is at its best. The opening tag match was fantastic and they followed that with decent action through the rest of the night. The biggest plus? There wasn't too much comedy schtick!

Triple H has announced that the iconic WarGames match will make its WWE main roster debut at this year's Survivor Series event in November.

WWE Crown Jewel in Saudi Arabia on November 5 will reportedly be announced tomorrow and will be headlined by Logan Paul vs Roman Reigns.

Our preview for tonight's WWE SmackDown on FOX, where media star Logan Paul will make his WWE return for the first time since SummerSlam.

Hangman Adam Page may have chased CM Punk out of AEW, but that didn't stop him from winning a title shot at Grand Slam Rampage.

In honor of Netflix's global fan event Tudum, here's a look at the best of the so-bad-they're-great bloopers from Stranger Things 4.

Though still a little too early for Season 4 details at Netflix's Tudum, The Umbrella Academy did release the full Season 3 blooper reel.