STARZ's Shining Vale embraced the better parts of its comedic style while turning up and listening in on the horror aspects of the story it's trying to tell. Warning, though: if you wish to avoid spoilers of any kind you should stop reading here.

Shining Vale did take the real struggle of being a published author and explained it well without hitting viewers over the head with it all. The quick-witted comebacks and phrasing used in many scenes in this episode amplified the talent very much present in this series. I did love the honest and somewhat brutal interaction between Kam (Merrin Dungey) and Pat (Courteney Cox) when discussing the book. It's a friend trying to restrain the personal in order to explain and critique a client's work. Sadly, there's some truth to dealing with ageism mixed with sexism in many industries, as it's particularly shown in Shining Vale with publishing, prioritizing certain genres over others (ex: YA novels over erotic women-centered novels).

The comedy of Shining Vale intermixed with some harsh realities thrown at Pat, with some meaningful and others just pure sexism, brought me into her world. I was focusing on her issues even when confronted with other problems. Things were directed back to the house, Rosemary (Mira Sorvino), and generational trauma and regret. Many central themes came together and could link up no matter what the scene was. Some scenes felt oddly short or as if things could continue on momentarily but wouldn't, such as with some of the scenes with Jake (Dylan Gage). I can't put a finger yet on how I feel about Terry's (Greg Kinnear) character so far. But there is something insightful and well-done when it comes to Terry, he's the progressive but without the concern to look inward or at the ways Pat is treated by those around her. That is something I will say is fantastic about the character because it's all too real in itself.

Shining Vale does an excellent job at throwing in references to The Shining in episodes. For example, the scene with Terry in the bedroom calling Jake over from the doorway to sit with him on the bed is almost shot-for-shot the same as the classic horror film. Although mixed in with it being a teenager trying to sit on his dad's lap made it funny and that's something I'll love this series for. People making a remix of Terry quitting his job at the bar was a great add-on to the episode and truly dug into his cycle of depression to focus energy and then into slumber. I will say the scenes and timing at the end of the episode were fantastic and one of my favorite parts of this series yet. If they continue to add in these truly horror-centered moments in the episodes it'll end up being fantastic week after week. 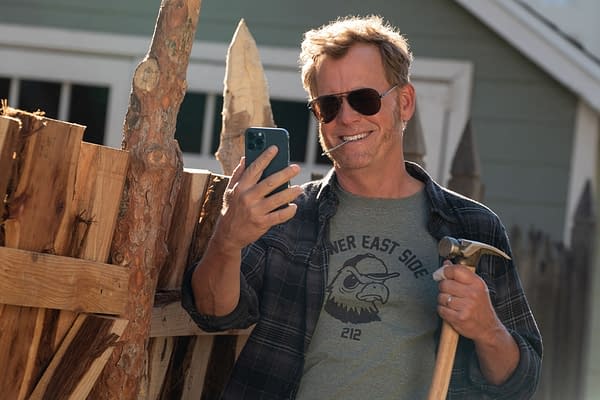 Review by Brittney Bender
10/10
STARZ's Shining Vale S01E06 "Whispering Hope" embraces the quick and efficient comedic moments as well as the potential for true horror within the episode. This series stuns with well-placed quick moments of dread placed alongside laugh-out-loud moments right afterward in this episode.
Credits
Network
STARZ

On October 28th, Mystery Science Theater 3000 is putting together its first-ever Halloween special with a costume contest & The Mask 3D.

Gudetama & Shakipiyo search for their mom in the official trailer for Netflix's Gudetama: An Eggcellent Adventure, premiering on December 13.

A month after learning Miguel Sapochnik would be stepping down, EP Jocelyn Diaz will also exit HBO's House of the Dragon ahead of Season 2.

Billy on the Street: Billy Eichner & Jack Black Have A Question

In the latest Billy on the Street, Billy Eichner & Jack Black hit the streets to hand out free Bros tickets (if you know your "Jack Black").

Even with The CW's DC's Stargirl taking this week off, we have a look at what's to come courtesy of an S03E06 overview released earlier.

CSI: Vegas Season 2: So What to Do About Gil Grissom & Sara Sidle?