It's been a hell of a weird road with ins and outs, twists and turns, and quite frankly, some questionable storytelling.  But on this week's SmackDown, WWE has promised that one team will walk out with both sets of Tag Team Titles when the Raw Tag Team Champions RK-Bro take on the SmackDown Tag Team Champions The Usos to unify the WWE Tag Titles and determine who is the best team in the company.  Let's see how it all went down.

We kick things off with The Bloodline hitting the ring as Roman Reigns and Paul Heyman explain why this is the most important night in the history of tag team wrestling (even though different sets of tag titles have been unified many times before) and Heyman makes a pitch for why Reigns is the greatest of all time.  They then make it very clear that they expect The Usos to win the titles and thus, become the greatest tag team of all time.

A really nice match here between two of the show's best veterans.  There's lots of fun action throughout and an exciting moment where Zayn hits Nakamura with a Michinoku Driver on the outside and with the ref about to count 10, Nakamura is able to dive back into the ring to avoid the count-out.  This is followed by Nakamura dumping Zayn on the outside and Zayn just barely beating the 10 count, only to eat a Kinshasa for the pinfall.  Good stuff!

Up next is Happy Talk with Happy Corbin, where he has Madcap Moss' trophy and he celebrates how he injured Moss last week on SmackDown with it.  He then proceeds to destroy the Andre The Giant trophy at ringside.

Not surprisingly, here's a very decisive ass-kicking.  Gunther wrecks Gulak for like a minute before planting him with the Powerbomb for the pinfall.

After the match, Gunther locks Gulak in a Boston Crab until Ricochet runs out to make the save.

So next we get what is sure to be the beginning of an infuriating run for NXT fans, as the incredibly talented former LA Knight makes his SmackDown debut as Max Dupri, a CEO of a modeling agency.  So let's see here, they have a guy who is a trusted wrestling veteran who has the exact look and size WWE say they want, can masterfully work the crowd as a heel or a babyface, and he can talk circles around anyone in the company.  And this is what they've come up with?  Does my description above remind anyone of a certain someone circa 1995-1996?  Anyone?  I'll give you a hint:

Let's hope Max Dupri has a similar Ringmaster to Stone Cold metamorphosis, cause this ain't worth a damn.

We now go to a backstage interview with RK-Bro, who hype themselves up before their big SmackDown main event match.

We then find Shotzi and Raquel Rodriguez arguing backstage, which leads to a match between them.

A short, but effective match here.  Shotzi is a terrific performer, so hopefully, WWE can figure out a more prominent role for her. But this one is clearly all about Rodriguez and they even cut to a bunch of wrestlers in the back watching her on the monitor and acting impressed, so clearly, this is the ol' Vince push here.  Anyway, Chingona Bomb for the pinfall.

We then go to a backstage interview with Xavier Woods, who invites Butch to face him without any help.

Get ready for Battle of the Boys!@AustinCreedWins vs. Butch up next on #SmackDown! pic.twitter.com/DeqKLYwjuZ

An ok match that Butch is dominating, but Woods rolls him up with the Backwoods Inside Cradle for the pinfall.

After, as Woods is celebrating on the stage, he's assaulted by Sheamus, Ridge Holland, and Butch.

We then get a backstage interview with Woods, who challenges them to a Six-Man Tag Match next week on SmackDown with himself, Kofi Kingston, and a mystery partner.

Things get decidedly awkward now as Michael Cole speaks to the audience (as Pat McAfee makes goofy faces next to him) and lays out WWE's side of the whole Sasha Banks and Naomi walkout situation from Raw.  He lays it on thick that they disappointed their fans and fellow superstars with their actions and as a result, will be suspended indefinitely and there will be an upcoming tournament to crown new WWE Women's Tag Team Champions… despite there only being two other official teams on the main roster.  Yikes!

So pretty early in this one, Riddle is whipped hard into the turnbuckle and appears to hurt his back as a result.  The ref separates everyone and flashes the X signal to the back to call for the doctor, so this doesn't appear to be a work at all.  They cut to commercial as the doctor gets in the ring.  When they come back from the break, Riddle appears ok, as he's still in the ring and taking bumps, so it appears a match-ending injury was avoided here.  He actually works the bulk of the match after this and takes some big bumps, so I guess it was a false alarm.

The match itself is quite good with lots of excitement and near-falls and Heyman on commentary is just terrific.  In the end, it all comes down to Riddle and Jey on the top turnbuckle as Riddle tries to set him up for a Super RKO.  But right as he's ready to go, Heyman distracts the ref, allowing Reigns to jump up and grab Jey as Riddle jumps for the RKO without him.  Jey then hits an Uso Splash for the pinfall to win the titles.

After the match, The Bloodline unloads on Orton and Riddle.  They beat Orton with the steel steps repeatedly and Jey hits an Uso Splash from the top turnbuckle on Riddel through the announce table.  Reigns then chokes Orton out with a Guillotine as they cut to a bunch of little kids crying in the audience.  The Bloodline stands in the ring posing with all of the gold as SmackDown ends.

Not a bad episode of SmackDown this week and a really solid ending.  The problem with heel Reigns and The Bloodline is while they're definitely heels, you don't exactly hate them.  This was a good job at having them do dastardly things against babyfaces and genuinely making you hate them.  You know, storytelling and all that. 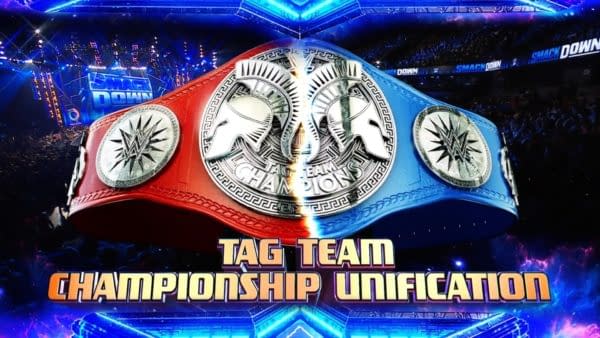 Review by Ryan Fassett
6/10
A really good match between Shinsuke Nakamura and Sami Zayn followed by a good main event where something actually happened and characters did something gave us a pretty solid episode of SmackDown this week on FOX.