HBO's The Baby, a limited original series, premiered its first out of six total episodes setting up a story of the impact of forced motherhood & a potentially demonic baby on one woman, Natasha. Warning, before you continue to read you should know there will be spoilers ahead with this recap/review of the episode. Join me as I dive into this interesting take on a new kind of motherhood.

The Baby starts us off with police attempting and failing to talk a woman down from edging closer to falling off a high cliff. Unzipped from the bag she was holding is a small baby in pajamas and honestly adorable slippers, but besides the adorable aspects of the infant it still somehow manages to freak the fuck out of the mom so much so that she back up and off of the cliff's edge. The baby crawls at a very unfun speed for the police and just yeets itself off the cliff as well but without one slipper thanks to the one cop.

We meet Natasha, the main character (besides cliff baby) who enjoys evenings playing poker at her place with her friends until the pregnancy and baby talk commences. It's interesting seeing this mix of emotion for her character, caught between agreeing with her irritation towards the obsession with the milestone of motherhood but you can also see how wrong she goes about displaying her displeasure with it. Bombarded by a new pregnancy in her friend group alongside the doom-scrolling on Instagram witnessing the baby shower pics and even one of a test fresh from being pissed on, Natasha goes on vacation.

After a creepy interaction with the cabin rental lady, Natasha attempts to unwind after we learn she is a chef when she takes a pit stop to take time off of work. The Baby goes right into it as Natasha witnesses the woman from the beginning fall beside the cabin and shortly after she catches the baby. We get many moments of her attempting to give the baby to someone else, from the cops to a gas station owner, yet each one ends up dead.

We don't see the baby do anything to them on screen but I assume along with Natasha herself that something is very wrong here. After time at the police station, including a very scary dream involving lactation and bitten nipples, Natasha goes home. The episode ends with her cleaning her place and assuming she has no obligation to this child, unfortunately, it arrived at her doorstep like a fast order from a local restaurant.

First off, The Baby has a fantastic selection of music and sound composition in it right from the very first scene. The first audio brought a moment of heavy breathing for me as I watched in concern and panic for the woman approaching the cliff. I'm very happy with the way they didn't approach Natasha as a woman with wavering career prospects or little to no direction. She's happy with her life, the career she finds herself in with cooking, and her friends although that can be rough at times. I would have loved a little more development of her communion with her friends and her space that shows us who she is within. But I also can see how her actions and more in this episode reveal a lot about her along the way. Overall, the first episode of The Baby established a unique and necessary story that speaks about community, motherhood, and expectations we have for ourselves and others when it comes to milestones in life. 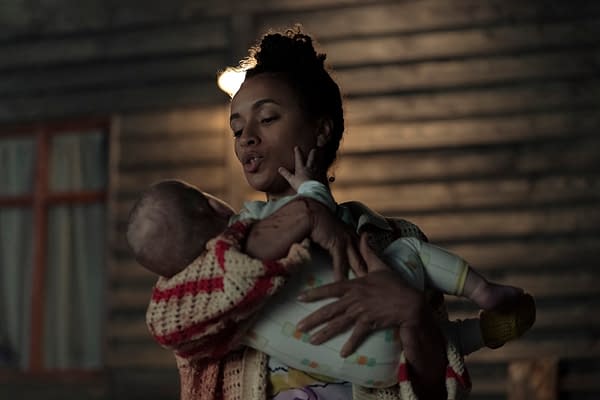 Review by Brittney Bender
9/10
HBO's The Baby, episode one, highlights the hilarious and impactful storytelling within the identity of women who have chosen for themselves not to step into a parental role. Mixing gruesome deaths with the concept of innocence within infancy, this episode has started off the limited series in a great direction.
Credits
Network
HBO

The CW's recently-premiered Tian Richards-starring "Nancy Drew" spinoff series Tom Swift will not be returning for a second season.

Superman and Lois/Arrowverse Answer Made The Flash S09 More Difficult

Here's how Superman and Lois parting ways with the Arrowverse made Season 9 even tougher for The Flash showrunner Eric Wallace & the writers.

What We Do in the Shadows S04: Anoop Desai Cast in Recurring Role

With What We Do in the Shadows returning for Season 4 on July 12, American Idol finalist Anoop Desai is set for a major recurring role.

With the third season's fourth episode hitting on Sunday, here's a look at the preview images for Paramount+'s Evil "The Demon of the Road."

With production underway on the second season, we learned this afternoon that CSI star Wallace Langham joined the cast of HBO's Perry Mason.