HBO's The Baby celebrated a hectic and cryptic summer solstice, as well as embraced the difficulty in some mother-daughter reunions in the recent fourth episode. Fair warning ahead of time, plenty of spoilers for the episode will be discussed after the image break…

The Baby welcomed Bobbi and Natasha's mother, Barbara, into the mix as they, the baby, and Mrs. Eaves get stuck nearby the commune they tried to stay away from. Settling into a mode of fright compared to flight, Natasha gets frustrated with the lack of transparency from Mrs. Eaves as to her knowledge of the baby and her relation to it. Bobbi unknowingly seeks the approval of her mother while Natasha gets creeped out by the very personable approach from the fellow commune-dwellers who feel a very natural way about motherhood.

The number of children was like a jump scare at first, but I felt for Bobbi when the curious but abrupt question came up concerning why she didn't have a child. Also, I feel the same way as Natasha… let the children keep a chocolate coin for the love of sweets. It was great seeing the way Natasha stepped in for Bobbi and it was important to see the subtle yet powerful ways that their mother's actions and words impact how the sisters treat one another. Afterward, seeing Barbara's workshop/meltdown shack it's evident there's a theme with her making clay people.

The Baby did a great job with approaching parental trauma in this episode, both with Bobbi and with Natasha. As the feast begins, Natasha gets confused as to why she was drawn to the area as Mrs. Eaves looked on during Barbara's summer solstice speech. Barbara had a slightly heteronormative speech about motherhood and it was clearly affecting Bobbi so I was not having it. Mrs. Eaves watched the odd bonfire dance party and witnessed Bobbi leave it behind to go back to her and Natasha's room. I would love a little more transparency from time to time with the character of Mrs. Eaves but I did find they did a good job with the scene revealing a sort of life connection between the baby and Natasha.

The imagery toward the end of this episode of The Baby was fantastic, the silhouette of Natasha, Mrs. Eaves, and the baby against the brightly burning fire was incredible. Add in the awesome musical score and this episode did have a genuinely interesting set of scenes towards the end, but it did feel like it almost reached some clarity but held it back for the sake of episode length. I got somewhat an idea as to possible history Mrs. Eaves has with the baby through Natasha's vision, but not enough and I'm hoping more is discussed in episode five.

The Baby Episode 4 "The Mother" 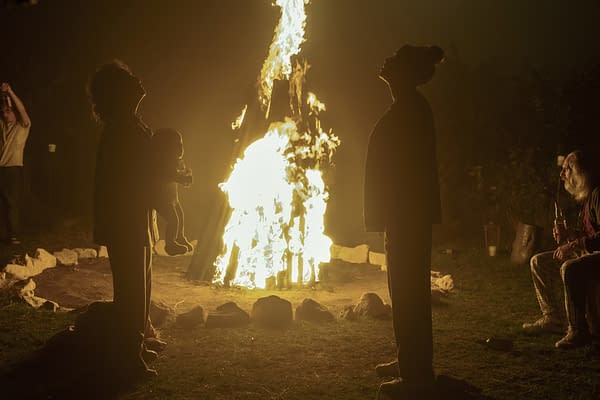 Review by Brittney Bender
9/10
HBO's The Baby Episode 4 "The Mother" brought up a lot of good emotional depth from Natasha and Bobbi when it came to their childhood and mother, Barbara. While I enjoyed the direction of the episode, I do hope for further clarity beyond the 3/4 we seemed to have gotten at the end.
Credits
Network
HBO