FOX's The Great North produced some great lessons in thriving in what you're good at and why being home alone can be a shorter adventure than imagined. Some minor spoilers may be ahead, so consider this your fair warning before reading any further…

In a school play inspired by the film The Perfect Storm, this episode of The Great North focused on Judy's desire to get cast as the lead character. Mainly Judy loved some musical theater, but she also saw a lot of opportunities to be cast opposite of her crush Steven and get to plant a kiss on him.  The guidance counselor would come along to basically mess with those plans when she cast Chrissy, not Judy, as the lead opposite of Steven. While this should be fine, since Chrissy is Steven's girlfriend, I can understand the angst and general puberty hurricane that is happening for Judy. The funniest part had to be when another classmate revealed that he farted in a meeting with the guidance counselor in order to leave the meeting completely.

The way this episode of The Great North explored the hilarious drama of the backstage of musical theater in school was fantastic. While the female lead did go to Chrissy, Beef somehow got a line in the play, and Judy got designated to the orchestra pit and that was after being determined as Chrissy's understudy and a physical piece of furniture, that being one of four stools. Meanwhile, Moon got himself in his own trap during his time home alone on the opening night of the school play. It was fun and really important to witness the talk between Chrissy and Judy towards the end. It's typical for shows to resolve things in a way that pits women or girls against one another, so I'm happy to see more and more shows like The Great North navigate away from that. Let me know in the comments below what you thought about the episode! 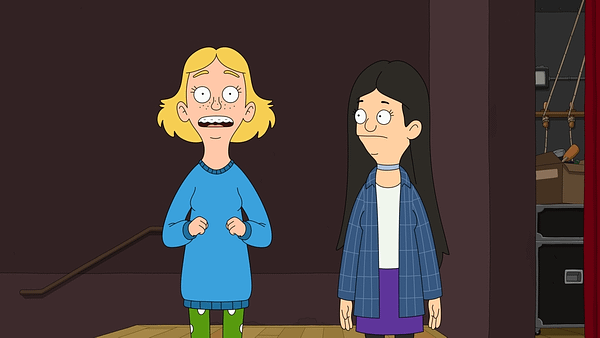 Review by Brittney Bender
8.5/10
FOX's The Great North took another opportunity to bring up an important point regarding how easy it can be to pit women or girls against one another in stories. While not necessarily a favorite episode, it did a solid job of being an example of how complex topics can be dealt with in simple and understanding ways.
Credits
Network
FOX