FOX's The Great North welcomed a guest star to this episode, Timothy Olyphant, who brought his golden voice to his role while a boat debacle halted Beef Tobin from figuring out how to share responsibilities. Some minor spoilers may be ahead, so consider this your fair warning before reading any further…

The Great North included a fantastic appearance of a guest character, Wade voiced by Olyphant. Wolf and Honeybee witnessed the appearance of Wade while strolling through the mall and I loved their devotion when describing this man to their family at home.

While our favorite oddball couple was drooling over the possibilities and potential talent in Wade, Beef was coming to terms with finding activities out of fishing on his boat as it needed fixing and became out of commission for a week. This episode of The Great North displayed some great moments of playful and adventure-filled moments we don't often see from Beef.

Before you ask, yes — there are some talented guest voices in Sunday's episode. 🎉

Timothy Olyphant is the oh-so handsome Wade and @JudithShelton is back as Londra! pic.twitter.com/JFegQmH8oW

Please enjoy @Nick_Offerman singing as three little porcelain dolls who love their sea captain. I know you've seen a lot of that exact thing, but here's one more! #thegreatnorth https://t.co/zu6ZtIlQs1

What was also developed was an important moment between him and his kids when they wanted to play with him as he found fun in a toy boat he built and Oktoberfest-inspired ceramic miniatures. The ability to lean into giving up some bits of control was awesome to see in this episode. The episode felt like it was being torn in two different directions at points, making it difficult to focus or simply want to focus on one story or the other. The Great North can have this difficulty in random episodes, where the focus seems divided but not in any equal sense compared to what's happening. I loved the utilization of the character of Wade, as well as Beef embracing the concept of play and sharing control, but both were competing for my attention when it could have been shared. 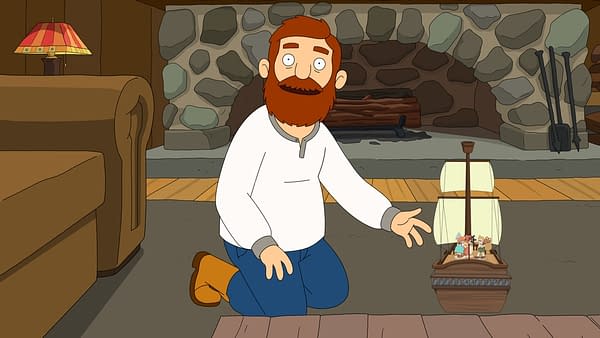 Review by Brittney Bender
7/10
FOX's The Great North S02E18 "Beef's in Toyland Adventure" was an episode featuring many fantastic components and lessons but a disjointed set of stories that felt mismatched.
Credits
Network
FOX

At Anime Expo, Crunchyroll announced its upcoming slate, including Overlord, Tomo-chan Is a Girl!, In/Spectre, To Your Eternity & Saint Seiya.

If you go on Disney+, you'll see that Jessica Jones is now "AKA Jessica Jones." A simple name change or another clue to something bigger?

WWE is banking on the mere idea of a possible Logan Paul vs. Miz match to draw viewers to tonight's July Fourth episode of WWE Raw.

Set to start hitting Netflix screens later this month, here's a look at the newest official trailer for the anime, Uncle From Another World.

Netflix's Stranger Things creators Matt Duffer & Ross Duffer explain why it's easier for them to aim for 8 episodes/10 hours for Season 5.

With the Netflix series arriving on July 14, here are some of the main players in Resident Evil as well as mini-teasers of what's to come.