Less than a day after executive producer Bill Lawrence (Scrubs) offered fans of Lauren Cohan (The Walking Dead) and Scott Foley's (Scandal) Whiskey Cavalier some hope that ABC would reconsider the series' cancellation, it appears the network is calling "closing time" the comedy-spy drama. Series creator, executive producer, and showrunner David Hemingson took to Twitter on Friday to announce that ABC had "fully and finally cancelled" the series.

It's incredibly painful to say goodbye to this show and our extraordinary cast, but knowing that we made something you enjoyed – and that I believe will stand the test of time – makes it all worthwhile. (2) pic.twitter.com/gCb0y4gPuJ

On Wednesday, Lawrence reassured fans that no matter what happened to the series they would get some resolutions to the season's storylines:

#WhiskeyCavalier Look, if there isn't a Season 2 @DavidHemingson and I will tell you what happened AND show you the kiss. Deal?

"It was a tough decision, it was the last decision we made We thought we gave it very strong launch in spring. But we lost audience. We felt the biggest opportunity was to try something new. We looked for other time slots but did not see a real opportunity to grow."

Deadline Hollywood reported at the time that the final decision for the one remaining timeslot came down to Whiskey Cavalier and ABC Studios-produced Emergence (turned down by NBC) – Emergence won the day with network executives reportedly looking to "try something new" in that time slot.

Series executive producer Lawrence confirmed the network's decision, with both Cohan and Foley expressing their appreciation to the fans via social media:

#WhiskeyCavalier is unfortunately over. I actually did have an investment in the show and the people. I'm sad. I'm grateful for the chance.

Dear @WhiskeyCav Fans, I had so much fun with you guys on our #WhiskeyWednesday tweet parties… I truly appreciate the love and support you've given us.

And to our amazing cast and crew, thank you for bringing this show to life! I love you guys so, so much. – LC ❤️

The series had a bumpy start earlier this year during their winter Television Critics Association (TCA) press event, but the series received a boost when ABC debuted the series following the Academy Awards in February. Even with that start, the ratings began their descent back down to earth. To give some perspective: as of May 9, Whiskey Cavalier's 0.57 average made it the 3rd lowest-rated hour drama (behind The Fix and For the People). While the series' LIVE+ ratings were impressive, the fact that the series was starting from such a low ratings point made the end ratings results less impressive.

WHISKEY CAVALIER — Whiskey Cavalier" is a high-octane, hour-long action dramedy that follows the adventures of tough but tender FBI super-agent Will Chase (codename: "Whiskey Cavalier"), played by Scott Foley. Following an emotional breakup, Chase is assigned to work with badass CIA operative Francesca "Frankie" Trowbridge (codename: "Fiery Tribune"), played by Lauren Cohan. Together, they lead an inter-agency team of flawed, funny and heroic spies who periodically save the world (and each other) while navigating the rocky roads of friendship, romance and office politics. 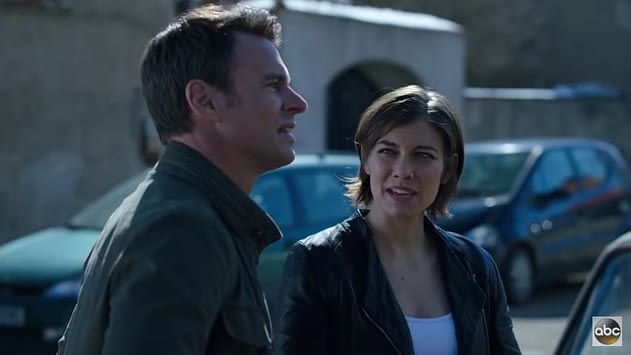 Jon Cryer (Arrowverse Lex Luthor) shared via Twitter that he pitched Warner Bros. on a Legion of Doom series post-Crisis on Infinite Earths.

Saturday Night Live & The MCU Have a Long Hosting History Together

Sarah Michelle Gellar on One "Buffy" Reminder That She Doesn't Need

On The Graham Norton Show, Sarah Michelle Gellar (Wolf Pack) revealed one Buffy the Vampire Slayer fact she doesn't need to be reminded of...

Rhea Ripley is headed to WrestleMania after winning the 2023 Women's Royal Rumble match, lasting throughout the entire thing after entering at number one.

Jon Cryer (Arrowverse Lex Luthor) shared via Twitter that he pitched Warner Bros. on a Legion of Doom series post-Crisis on Infinite Earths.

The 2023 Royal Rumble is taking place in San Antonio Texas, and Bleeding Cool has the live coverage you need. Or want? Well, we have coverage.