Almost like stepping into the maskless multiplexes of the late eighties and early nineties, Batman '89 #1 seamlessly takes you back into the cinematic universe that may have jumpstarted the modern comic book movie era. With a distinct aesthetic and pitch-perfect renditions of the voices from the source material, this work is manna from heaven for those who enjoyed the gothic stylings that still offers something to fans who may have missed all the seats on the bandwagon, all while paying attention to what's happened in the interim.

The true focus of this book is Harvey Dent, as portrayed by Billy Dee Williams. Likewise, by using a mix of Williams' performances in both Mahogany and The Empire Strikes Back, screenwriter Sam Hamm has nailed the actor's swagger and developed new layers to the doomed district attorney with details that make what comics fans know is coming inevitable. From Dent's morning visit to stately Wayne Manor to his plan to work alongside Harvey Bullock ("He's a shark. He smells blood") to his visit to his old neighborhood (Burnside!), the character is very well fleshed out, down to his mercenary wooing of Sergeant Barbara Gordon. This could be the most layered, clear vision of Harvey Dent we've seen in print, making even his "crusade" make more sense.

There's a real deftness in the work of Joe Quinones, capturing the haunted horror of a city gripped by madness and violence. The coloring of Leonardo Ito does amazing things with the shadows and lighting of the city (even a jowly, angry shopkeeper looks amazing in the light of Gotham at night). Likewise, the lettering of the literally death-and-taxes reliable Clayton Cowles delivers exposition, and one-liners (and there are plenty, but few hit like, "Still do") is a perfect frame for the work, never intruding and always making the work better.

The only criticism one might level at this is that if, say, you landed here from Alpha Centauri and didn't know what Batman's deal was, he gets the short end of the characterization stick. To be fair, if you're buying a Batman '89 book, you likely know what you're in for and surely know who felt yummier and where someone wonders if you danced with the devil. For Batman fans of all ages, this book is a treasure and superbly enjoyable. RATING: BUY.

Batman '89 #1
By Sam Hamm, Joe Quinones
Step back into the Gotham of Tim Burton's seminal classic Batman movies! Batman '89 brings in screenwriter Sam Hamm (Batman, Batman Returns) and artist Joe Quinones (Dial H for Hero) to pull on a number of threads left dangling by the prolific director. Gotham becomes torn in two as citizens dressed as Batman and The Joker duke it out in the streets. As D.A. Harvey Dent tries to keep the city together, he targets the one problem tearing it apart: BATMAN! And he'll get Bruce Wayne's help in taking down the Dark Knight! 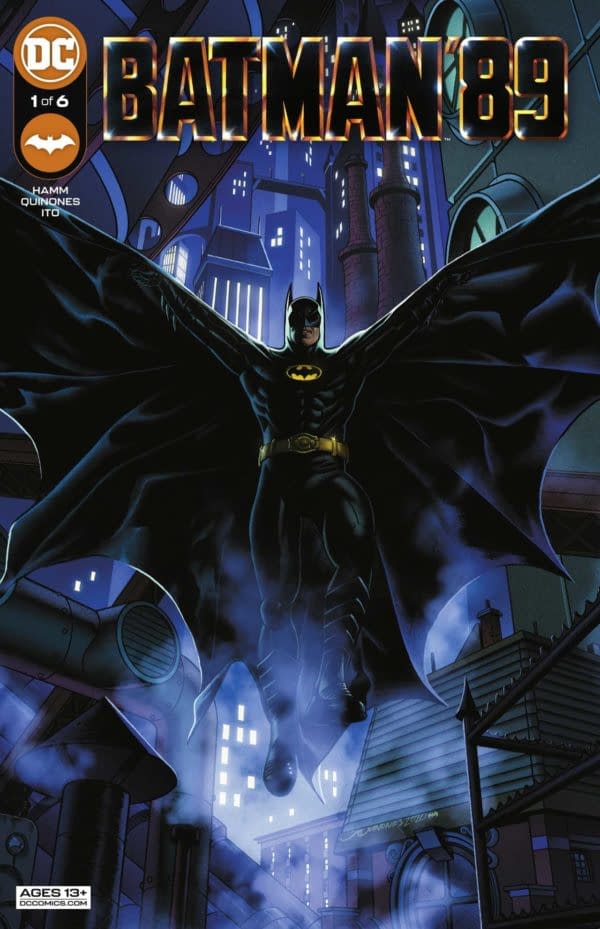 Review by Hannibal Tabu
8.5/10
You don’t have to watch the Flash movie to see what might have been for more Michael Keaton-flavored Bat action and one of the most layered Harvey Dent depictions ever.
Credits
Editors
Andrew Marino, Andy Khouri

Carnage wants to be the new Malakith in August's Carnage #6, kicking off a new story arc that should thrill symbiotebronies everywhere.

Marvel may not be able to back up the legacy math behind Amazing Fantasy #1000 in comics, but maybe they can get there with variant covers.

Doctor Doom is coming to Fortnite x Marvel: Zero War #4, the latest in the Marvel companion comic to a series of Fortnite digital download codes.

The Killer: Affairs of the State #4 Preview: Netflix or Bust

Read this preview of The Killer: Affairs of the State #4 from Matz and Luc Jacamon or you will make Michael Fassbender and Tilda Swinton very sad.

What could be better than reading Love Everlasting, the creator-owned series by Tom King and Elsa Charretier, for free on Substack? How about paying Image for it.

The Changing Face Of Krakoan Resurrection In Today's X-Men Comics

There are rules. Rules are meant to be broken, or at least bent out of shape. Bend them yoo much however and you'll be in The Pit, Welcome to Krakoa