When the going gets tough, the tough go to Mars. That idea is central to Black Panther #3, where T'challa's mission to save sleeper agents he's placed around the globe runs into unexpected challenges while showing equally unexpected nuances for the characters herein.

While trying to recall one of the agents placed in deep cover, T'challa and another Wakandan agent called Omolola face-off with unnamed, masked assailants who can keep up with them in melee combat; this leads to a re-evaluation of the plan and a strategic retreat to the mutant refuge of Arrako, which has superseded the world, Mars. Along the way, there are lots of surprises realizations from the lead character as he struggles with changes in his life and in his nation. This John Ridley script never takes its focus off of the personal struggles of the king, no matter if it's outside of a suburban home or with a backdrop of stars. Juann Cabal, Ibrahim Moustafa, Matt Milla, and Joe Sabino deliver with visual storytelling that's crystal clear as it makes every plot twist a refreshing surprise.

On top of all that, there's a boatload of extra content, including a mythic tale of T'challa engaging with divinity (with a fun Tribe Called Quest gag thrown in) and a show of power from fundamentalist elements of Wakandan society. All of that adds wonderful texture and substance to the work.

There are a number of moments here that are extremely delightful but would be spoilers to reveal. Suffice it to say that this is now the third fantastic presentation of the Wakandan monarch in a row, showcasing the grandiose backdrop that sets the stage for T'challa's tale. Let's get much, much more of this, please. RATING: BUY.

Black Panther #3
By John Ridley, Juann Cabal, Ibrahim Moustafa
T'CHALLA VS. THE X-MEN OF MARS! With assassins closing in and Wakanda's faith in him shaken, T'Challa goes to visit Storm on the newly terraformed Mars. But this will not be a happy reunion, as T'Challa has ulterior motives for his visit. And back home, Shuri discovers who is behind the attacks on Wakanda's secret agents, a revelation that will change everything. 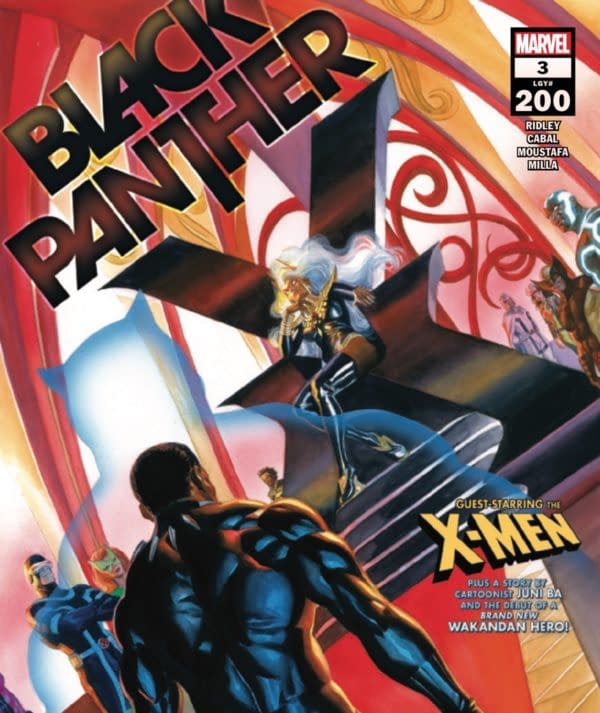 Review by Hannibal Tabu
8/10
T’challa … in … spaaaaaaaace! When things get hot on the third rock from the sun, it’s a good thing when your day one is the voice of the system.
Credits
Editors
Akira Yoshida, Wil Moss, Alanna Smith, Kaitlyn Lindtvedt