Cyberpunk 2077: Blackout #2 continues the story of Arturo, the brain dance repairman with an unplayable debt due much too soon. What's striking about the issue is just how deeply writer Bartosz Sztybor takes the idea of writing worst-case scenarios. The reader feels the bind Arturo is put in, especially when a different debt company (who bought the original debt) enters the picture.

For many writers, it would be enough to put Arturo in the bind and hang the debt lazily over his head, but Sztybor finds a way to accelerate the story. That pace (or illusion of it) is essential the stakes feel real. Arturo can't just hang out in his studio apartment hiding from the loan sharks (to use a phrase from a song whose title is probably a Sandman reference); the clock is visibly ticking.

Credit to the art team of artist Roberto Ricci and colorist Fabiana Mascolo that delivers panel in, panel out detail in Cyberpunk 2077: Blackout #2 that wows me. Every bit of extra detail adds to the cluttered, lived-in nature of the world. With this kind of cartooning, it's easy to believe people live in the setting. In terms of Frank Cvetkovic's lettering, there's a weird effect on the caption boxes that's distracting. You can see it below, there are style elements to the caption boxes that aren't lined up with the caption itself. Maybe it's supposed to tie the boxes in different panels to each other?

That minor criticism notwithstanding, Cyberpunk 2077: Blackout #2 is a heist comic that's stolen my heart.

Arturos heist scheme is set in motion–all he needs is a team–a trusted cyberpunk, the best driver in Night City, and an unlikely ally within one of the citys most corrupt institutions. Choices have consequences, but this time, the choice is his. 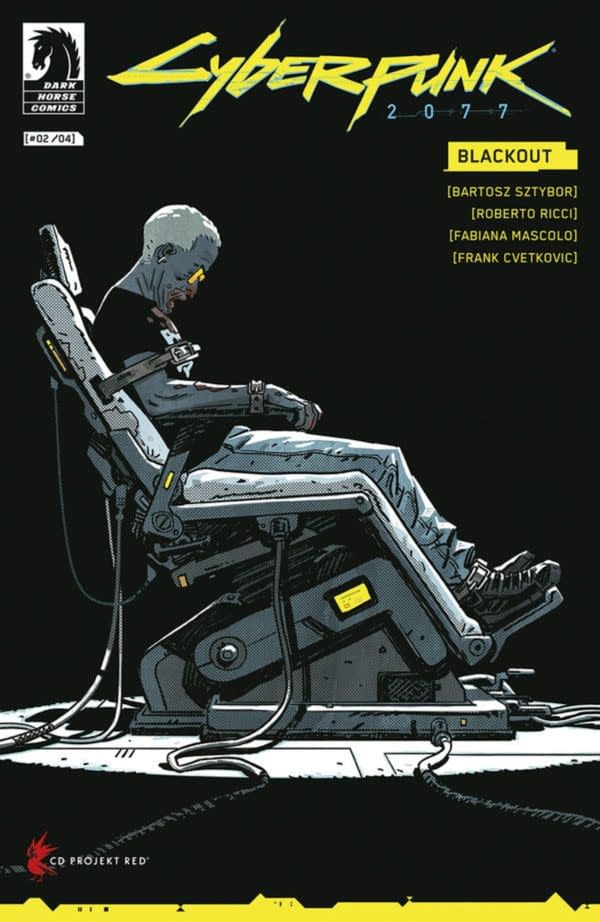