In a kind of "Days of Future John" approach, Green Lantern #10 has the quest leader Lantern choose his final form and sees what kind of trouble is going on back home. With a jarring but still entertaining expansion of scope, this shows that John Stewart is leveling up into a whole new kind of character.

The story skips ahead in time to show John Stewart as the Lord Prefect of an emerald-shaded army protecting a distant area of space. The tale jumps around in time and shows this is actually part of a struggle John's engaging in the present and gives him a glimpse of events on Oa, where the former leaders of that world are back, but that's honestly more mess than a solution. That issue forces Jo Muellin once again to clean up a mess for people who should have known better as vengeful forces of a magic march on the Lanterns' seat of power.

Geoffrey Thorne's script has ambitions that are galactic, and there are huge ideas at play. The visuals presented by ChrisCross, Juan Castro, Marco Santucci, and Rob Leigh are best at capturing reactions and facial expressions, people adapting to impossible circumstances and enormous challenges, with a closing page that's a pearl clutcher. This is a big swing of a story that's still climbing like "Highball" Jordan couldn't even imagine.

Is it easy to hang on for such a thrilling ride? Maybe not, but it's surely some of the most daring, "big idea" comics from the mainstream available today. RATING: BUY.

Green Lantern #10
By Geoffrey Thorne, ChrisCross, Juan Castro, Marco Santucci
John Stewart was a Marine, an architect, a Green Lantern. Now John is the only one who can stop the Lightbringerâs plans, but in order to do so, he must choose a new path forward, one that will change his role in the DC Universe forever! Back on Oa, Jo Mullein faces the formidable Anti-Guardian! 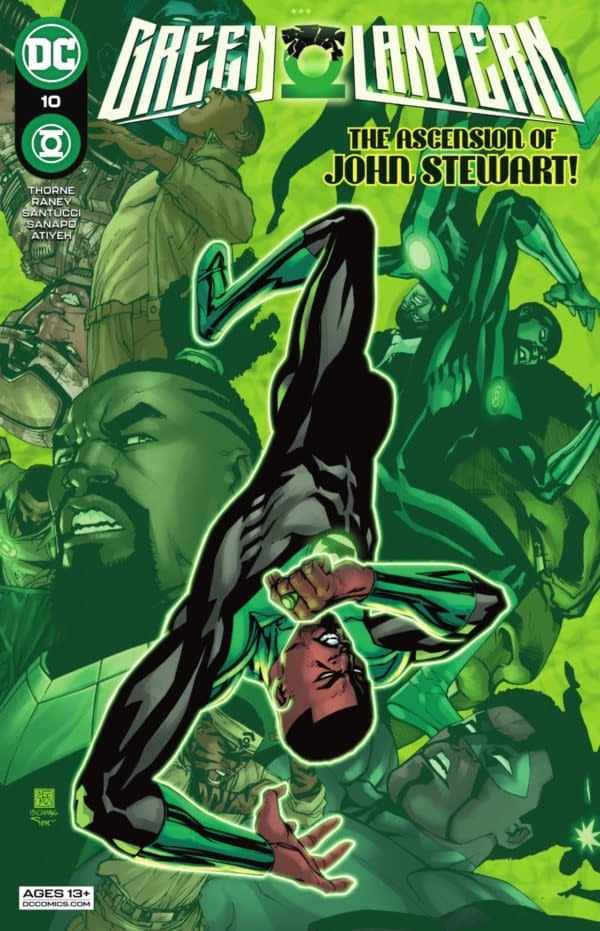 Review by Hannibal Tabu
8/10
What dreams may come to show the potential of John Stewart? Take a glimpse of this future state while all that remains ashes on Oa.
Credits
Editors
Andrew Marino, Marquis Draper