Chaos reigns across the universe as a depowered group of Green Lanterns strives to save innocents, and the last person with a working ring struggles to hold things together, all as everything in the galaxy wants to pull things apart even when this series may not hit every note, what Green Lantern #8 does still shines strongly.

John Stewart has a tag-along — the New God Lonar, god of journeys, who has told the former architect and Marine that everything the Guardians did in regards to his time with the Corps was to hold back who he really was. Now, if this means that he was an unnamed New Guardian from the Millennium era, that's a loooooong con. Metron did once say of Earth, "Our search was long, and our war continues, but we found the planetary cradle of the Gods to Come. … you are only forerunners."

In any case, Stewart is the only green power left in the Dark Sector, and despite Lonar's insistence that all the little deaths won't matter, Stewart is hell-bent on making a difference. "We save everyone we can. That's what we are. That's what we do!" This show of heroism against what are essentially angry space angels had plenty of requisite drama. However, honestly, the presentation by ChrisCross, Marco Santucci, Juan Castro, Michael Atiyeh, and Rob Leigh did a solid job but didn't quite match the grandeur of this Geoffrey Thorne script. Is that a bad thing? No, not at all. Is it the greatness we've seen in previous issues? Also, no. It's very, very close, but it's not there.

Meanwhile, back on Oa, a Coluan researcher digs into the history of the Lanterns' benefactors while the unpowered Corps itself is revolting — literally, they're trying to crack open Oa's armory and take back their agency and work in regulating the galaxy, regardless of what the "United sprocking Planets" has to say about it. Jo Muellin, "the only one of us still standing when the power battery went down," makes an iconic figure with all the grandeur and stature of a legend in the making. She lays down the law, and it's a glory to behold. Sadly, it distracts her from the mystery and the Coluan, and that seems like it's more trouble than anyone wants.

This is a thick body of work, but when things happen, it's less than spectacular, and when they don't, it seems very dramatic but accomplishes little. This book is still good, quite good … but not as good as it has been, nor as its story indicates it can become. Not this month, anyway. RATING: HONORABLE MENTION.

Green Lantern #8
By Geoffrey Thorne, ChrisCross, Marco Santucci
Will the Dark Sector die? With trillions of lives in peril, John battles the DEISTORM and the challenge of its FUTURE STATES! Meanwhile, Jo Mullein solves the mystery of the Battery's destruction in time to see the rise of a new and ancient enemy. Is this the final end of Oa and the Green Lanterns?! 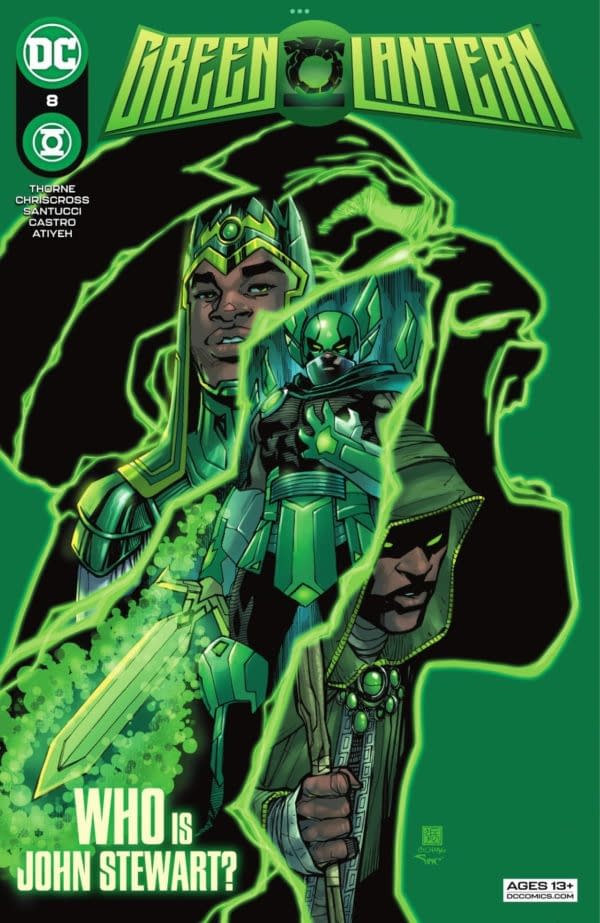 Review by Hannibal Tabu
7.5/10
Big talk and medium action for an issue that will scratch the itch for franchise fans but loses its grip and falls just short of glory.
Credits
Editors
Mike Cotton, Andrew Marino, Marquis Draper

In Retro, what starts off as a light-hearted competition to live without modern technology for a year turns into a fight for survival in this page-turning

The Debut of Fiction House's Ranger Comics, Up for Auction

Iron Man rushes into battle and gets his butt kicked in this preview of Fortnite x Marvel: Zero War #5, proving that no matter the universe, some things are always the same.

Sabrina gives a lighthouse ghost a taste of his own medicine in this preview of Archie Showcase Digest #10: Sabrina The Teenage Witch.

Something Is Killing The Children's David Mack Pack Is Back, For NYCC

David Mack will have a new Something Is Killing The Children Mack Pack, exclusive to New York Comic-Con, his fourth such pack featuring his own exclusive

Marvel celebrates Latin/x voices in the best way possible in this preview of Marvel's Voices: Community #1: the way where you give Marvel seis dólares!