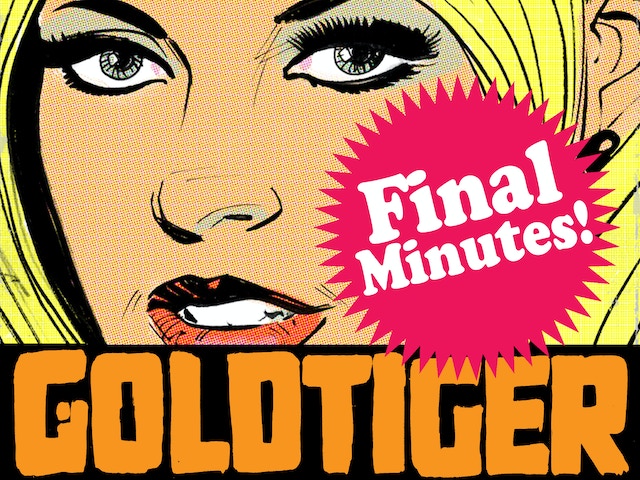 Goldtiger was a Kickstartered comic book project by Guy Adams and Jimmy Broxton that… kinda disappeared. A fictitiously revived exploitation comic book strip, we last wrote about it back in February 2013.

We have a publisher willing to help spread the crazy love that is Goldtiger.

For now, we can't give details (or even name them) as they'll need to factor the release of the book into their schedule and promote it accordingly when the time is right. It won't be far away.

Although long completed, we are now making some changes to the content of the book (adding more material that came to light following a search of the archives of our golden new publishing partners, stuff that is really too groovy not to include) the end is now in sight and we couldn't be more pleased.

Rest assured you lovely things, all the extra goodies promised and pledged for will be coming your way along with the book, which will be enhanced and unique to this Kickstarter. We'll reveal just how special your exclusive editions will be as soon as we can.

Because the book will be expanding (and because the publisher wants to tie everything together) we won't be releasing the digital version just yet, hope you all understand the reasoning.

Once again, thank you all for your incredible support and patience.

UPDATE: Broxton has added a new update as a result:

Well, so much for our carefully planned announcement, eh?

As some of you may have seen. The listing info for the Goldtiger went live on Amazon yesterday. This wasn't planned by either our publishing partners (Rebellion) or ourselves. The agreed plan was that we'd get to tell you guys first then, very shortly after, a general press release would go out. Best laid plans of mice and tigers…

This sort of thing can happen as some of you may know, the convoluted data web of info between publishers, distributors and Amazon is a nightmare and publishing information has to be submitted many months in advance (though is intended to stay 'in house' and not be public). When we spotted the Amazon info (which was placeholder info at best) had gone live we nudged Rebellion and they sprang into action to get it pulled (which it now has been).

In the meantime Bleeding Cool spotted it and… ran a news post about it!

So that was that, the cat can no longer even see the bag, let alone be said to live in it.

So, yes, we've partnered with Rebellion. As some of you may know I've worked with them extensively with my novels as well as my various 2000AD series so they were an obvious publisher to speak to when the proverbial hit the spinning air thing. We discussed various ideas with them and mutually came up with a plan to expand the book to include some extra material pulling Barreti's (frustrated) attempts to revive Goldtiger for 2000AD into the mix. Because… well, once you discover he tried to do that of course you'd want to include it. So, the book you were expecting plus a bit more, basically.

Jimmy and I have been discussing how to ensure backers get something above and beyond the trade edition, as is your right, and we'll announce details about that as they pull together. Rest assured we intend to look after you just as you have looked after us throughout this protracted nonsense. In the meantime, while both we and Rebellion would rather it had been announced another way, let's concentrate on the good news: Goldtiger is on the way and it's bigger than ever.

Love and thanks to you all as always, this has been a right old journey but see that? Just over there? That's the finish line that is.