Subtlety and implication are the concepts front and center for Human Target #4. This book shows Christopher Chance using one of his less-well-regarded abilities yet still possibly falling into what truthfully seems like a trap.

Alongside the heroine Ice, a surprising but effective femme fatale herself, the title character continues his tour through the characters of the Justice League International. The two of them go to visit billionaire Ted Kord, who flits around the world in a fitting spandex costume as the Blue Beetle. The question is whether or not an attempt was made to murder Lex Luthor with irrevocable poison, which Chance ingested while masquerading as Luthor in his work as a deep cover bodyguard of sorts.

In Chance's own words, he asks Kord one question, and the man doesn't "stop talking for eighteen hours." Along the way, Chance learns a lot about the somewhat ridiculous hero, learning much more about Ice and inching closer to his own impending mortality.

Tom King's script is delicate, revealing more in what's not said than the engaging, breezy dialogue. Especially helpful is the visual table set by Greg Smallwood and Clayton Cowles, which does an amazing amount of storytelling in gestures that turn out to be the true focus when the words seem to imply otherwise. To say much more about that would spoil the wonderful, quiet moments here, but the grandest concern with this book is that — as noted — Chance barely has any effect on the plot at all, an observer who drifts from moment to moment, watching and listening but showing no true agency in the twilight days of his own life.

Perhaps this will stick the landing and become legendary like Vision, or maybe it'll stumble along the way and become an ambitious but flawed experience like Omega Men. For now, this is an interesting trip, even though its title character doesn't really seem to be at the wheel. RATING: HONORABLE MENTION.

Human Target #4
By Tom King, Greg Smallwood
With eight days left to solve his own murder, Christopher Chance tracks down his next suspect. His murderer couldn't be Blue Beetle — could it? 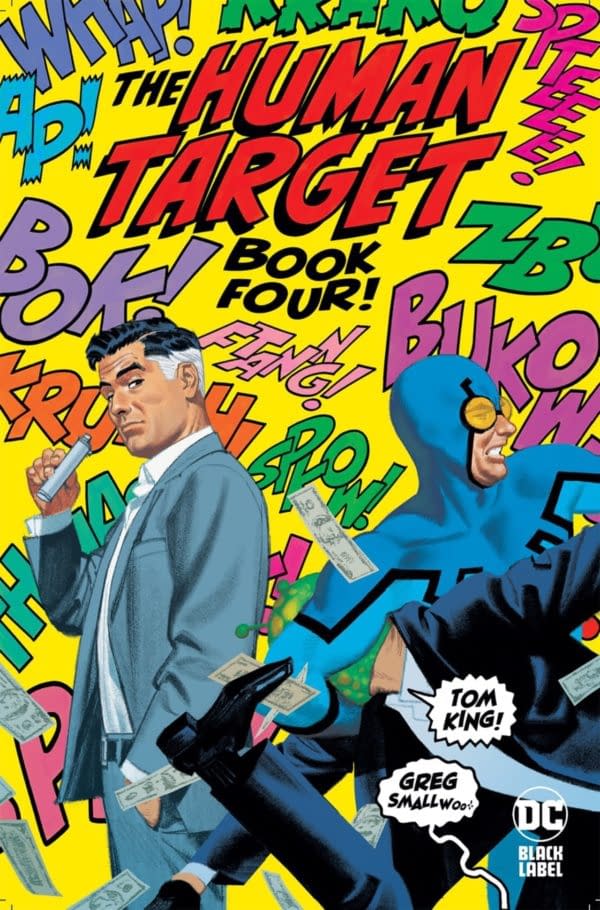 Review by Hannibal Tabu
7.5/10
It’s time to bwa-ha-ha hard as a day with Blue Beetle reveals much more about Ice than anyone likely intended.
Credits
Editor
Ben Abernathy

The Debut of Valkyrie in Air Fighters Comics V2 #2, Up for Auction

In her debut appearance in Air Fighters Comics, Valkyrie was persuaded by Airboy to switch sides and join the Allies during WWII.

The Debut of Streak the Wonder Dog in Green Lantern #30, at Auction

Streak the Wonder Dog was created by Bob Kanigher and Alex Toth, and debuted in Green Lantern #30, cover-dated Feb-March 1948.

Bleeding Cool recently ran some gossip about Oswald Cobblepot in the upcoming Batman #125. But we didn't know anything about the upcoming Failsafe

Over 35 years ago, Twisted Sister frontman Dee Snider marched into the United States Senate's Committee on Commerce in a jean jacket and tank top to

The solicitation for the upcoming Star Wars Visions series by Afro Samurai creator Takashi Okazaki being published by Marvel Comics read as follows; FROM

Return Of Casanova & The Pro To Image Comics In September

Image Comics continues its 30th-anniversary anthology with its sixth issue solicited for September 2022. And that includes a revival of the series