Home » Comics » What Is Krakoa Doing To Domino? (X-Force #9 Spoilers)

In the previous issue of X-Force #8, Domino talked about not choosing to end her life and be resurrected by Krakoa, removing the scars she had experienced, both mentally and physically, at the hands of the mutant-hating organization Xeno. 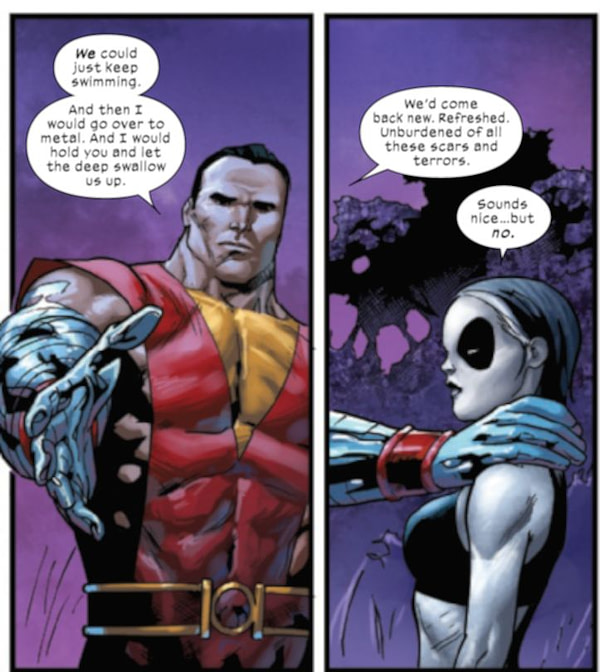 This month in X-Force #9, it's all change. Domino has gone through the resurrection and is suddenly very happy about her new self. And can sleep at night.

And she even gives that fact that she underwent such a resurrection as the evidence that she had changed her mind, even if she can no longer remember doing so.

Which really looks as if the cracks are beginning to show. Coercion in the state of Krakoa? And those at the focal point blind to it? And where is Moira MacTaggert anyway?

X-FORCE #9 DX
(W) Ben Percy (A) Joshua Cassara (CA) Dustin Weaver
REAP WHAT YOU SOW!
In the heart of South America, X-Force finds a problem growing that threatens to destroy everything they've built… and one of their own might be responsible.
Parental AdvisoryIn Shops: Mar 18, 2020
SRP: $3.99

X-Force #9 is out today from Marvel Comics… I bought mine from the still-very-open Piranha Comics in Kingston-Upon-Thames. Piranha Comics is a small south London comic store chain with a small south-east store in Kingston-Upon Thames's market centre, which runs Magic The Gathering nights on Fridays, and a larger south-west store in Bromley, which also runs Magic nights and has an extensive back issue collection and online store. If you are in the neighbourhood, check them out.