With a mixed bag between amazing characterization, jaw-dropping in-jokes, and a somewhat questionable last page reveal, Nightwing #81 takes you on a roller coaster of emotions while introducing a new threat to the streets of Bludhaven.

Let's cover the good first. Bruno Redondo, Adriano Lucas, and Wes Abbott are turning in not just one of the best-looking books on the stands — it is stunning — but one that rewards re-reading as the tiny art gags snuck on to t-shirts and random elements are absolutely riotously funny. When there's a fight scene, to see the way it plays out as a sequence of ideas in the same image is very, very creative and clever.

Likewise, Tom Taylor's script breathes lives into the dialogue and ideas of these characters, from Nightwing's stubborn refusal to listen to the kind of smirking exasperation Barbara Gordon shows in her off-again-on-again paramour. That's all top-notch.

Given the relatively newness of the antagonist Heartless, his introduction here was pretty smooth and kept enough of his air of mystery while selling it with action and banter. That's a good choice.

The last page reveal was a little soap-opera-ish, and while it does give the mayoral side plot some legs, it does so by taking a swing at an area of Dick Grayson's life that was considered settled business. Relitigating areas like that is rarely a good idea, but this team has pulled off miracles before, so let's see if future issues show this as a masterstroke.

This is an example of all-around solid comics that are being done at a high level of quality with only the teensiest head-scratching idea to throw it off. RATING: HONORABLE MENTION.

Nightwing #81
By Tom Taylor, Bruno Redondo
Dick Grayson trades out his escrima sticks for a magnifying glass and a sleuth hat to investigate Bludhaven's new mayor, Melinda Zucco, and find out how the daughter of the man who murdered Dick's parents came to power in Nightwing's city. But his investigative adventure is cut short when he comes face to face with the most horrendous villain in the history of Bludhaven — HEARTLESS. 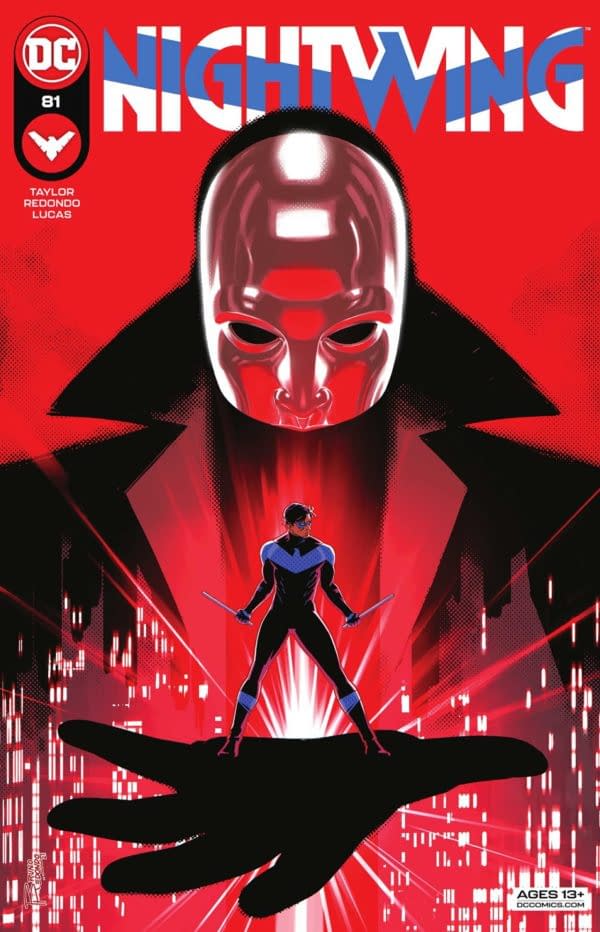 Review by Hannibal Tabu
7.5/10
Punch drunk and motivated, Dick Grayson is thinking with his fists and not his financials in an issue with a twist.
Credits
T
T
A
A
B
B
D
D

Just earlier this week, we were asking: What's next for Oni Press? Well, in a major shake-up for the industry (and Bleeding Cool Power List if I ever do

George Perez's Shirts Up For Sale, To Help His Widow, Carol Flynn

Earlier this year,  George Perez died from pancreatic cancer, though not before the comics industry were acle to express their love for him, both in words

Manta Comics, one of the leading digital comics platforms, today revealed three new original series created by its in-house studio that will make up its

Bleeding Cool have been fans of cartoonist Katie Cook for many years, and especially love the lines that she can command at comic book conventions,

Created by Gene Luen Yang and Bernard Chang, Monkey Prince first appeared in the DC Festival of Heroes: The Asian Superhero Celebration #1, out in July,

What Does the Fox Say About Some Very Rare Early Fox Comics?