In Nightwing #86, Gotham City is under siege by a mechanized private militia full of anonymous cannon fodder, and Dick Grayson commuted from Bludhaven to pitch in. The absentee stakes are made somewhat personal here with great dialogue choices, but the underlying concepts are not as strong as the team executing them.

A billionaire named Simon Saint has swooped in with a militarized, mechanized force called the Magistrate to impose order on Gotham City after the Joker War crossover decimated Bruce Wayne's fortune and a new mayor has turned the city against vigilantes. Yeah, it's a lot.

Nightwing swung into town to be concerned about the destruction of Barbara Gordon's clocktower, which was the last place they saw Spoiler and Orphan and was caused by an Oracle knockoff called Seer. The Bat-family then set themselves to invade the flying Skybase-01 to defeat this threat.

Tom Taylor is a master of characterization, with fun dialogue ("This is an unusual but not unwelcome amount of hugging" and "… more of our plans should include jetpacks," both from Spoiler). Robbi Rodriguez, Adriano Lucas, and Wes Abbott deliver on thrilling action scenes ("choom choom choom") that take the team of unpowered vigilantes into danger.

If you wanted to see some of your favorite characters take on a largely anonymous and faceless horde of goons while causing truly impressive amounts of property damage, this could be your jam. The team here certainly knows how to put on a show. However, the whole Fear State gag is a lesser-than version of what's going on in the Titans TV series now with a much less coherent plan and less charismatic adversaries. That's not the fault of this creative team; it's just the hand they were dealt. Still, there's nothing wrong with seeing people play a less than inspiring song with great skill. RATING: HONORABLE MENTION

Nightwing #86
By Tom Taylor, Robbi Rodriguez
Nightwing and Babs have fought through the fear-stricken Gotham streets, but now their fight takes them to the skies above Gotham, with the Batgirls and Tim Drake (Robin) in tow! Now aboard the Magistrate's Skybase-01, they have made it their mission to bring the airborne leviathan down, prevent Seer's disinformation from being broadcast, and save the innocents aboard. But in this paranoia-stricken city, not everyone is who they seem! 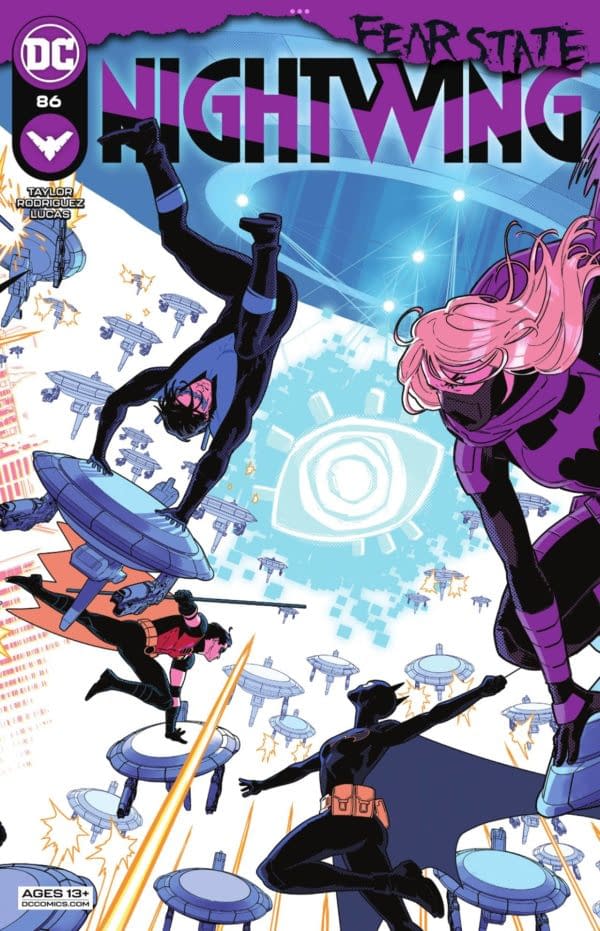 Review by Hannibal Tabu
7.5/10
With a cadre of caped crusaders, it's an invasion on an airship to battle the fascism gripping the city … yet no one gets killed. Funny, that.
Credits
Editors
Ben Abernathy, Jessica Chen, Jessica Berbey

Archie Caught Between Betty & Veronica in Pep #143, Up for Auction

Always a good time, Archie is caught between Betty & Veronica on the Cover of Pep Comics and taking bids at Heritage Auctions.

Meager Leager, just released by About Comics, is the new name for Walt Larner's Little Leaguer cartoons, from one of the oldest surviving American comic creators.

Superman Breaks The Walls Down in Superman #116 UK Edition, at Auction

Who else loves a great silly Superman cover like this one taking bids at Heritage Auctions today.We just love looking at these.

Vixen & Batwing, Together At The Dawn Of DC (Spoilers) #Vixwing

DC Comics looks like they will be bringing Vixen and Batwing closer together for 2023 in the Dawn Of DC. Is it too soon to use the hashtag #vixwing?

Sana Starros gets a warm welcome on returning to her gamily home in this preview of Star Wars: Sanna Starros #1... in the form of droids trying to kill her.