With a strong showing of family dynamics and a good balance of plot elements, Static #3: Season One presents an embryonic hero facing enormous odds with a strong support network. For fans of the original take in the 1990s, the changes that have happened here are very smart and a great fit for this modern milieu.

Searching for solutions, teenaged prodigy Virgil Hawkins finds himself trapped by police looking for wrongly accused scientist Curtis Metcalf. This leads to a rushed raid of one of Metcalf's secret caches of "super-science haul" equipment, including "chimeric cloth," "high-grade protective material," and "kinetic metal?" While leaning on the strong foundation installed in him from his family, Hawkins develops his first "super suit," with a strong nod to the past and a nice modern flair.

Writer Vita Ayala manages a lot of interesting and engaging plot elements — three levels of threat, from Hawkins' own insecurities, the combined threat of a flame powered teenaged miscreant and intrusive law enforcement, with the promise of a conflict with powered crime on the horizon — and balances them brilliantly. Nikolas Draper-Ivey does it all visually with the opening twelve pages, which showcase a distinct style and dynamism. In the second half of the book, the transition to ChrisCross is not jarring, with Will Quintana on hand to manage the coloring. His sure hand manages intricate hairstyles and moments of emotional honesty. Through it all, Andworld Design makes every word have an impact and effect.

This is a fantastic look at a different universe of heroes and villains that shows great respect for what came before and offers wholly new experiences for people just joining the party. RATING: BUY.

Static #3: Season One
By Vita Ayala, Nikolas-Draper-Ivey, ChrisCross
The government believes the super-powered teenage Bang Babies of Dakota are out of control — and they're too dangerous to be allowed on the streets! When his classmates start disappearing, Virgil Hawkins wants to do the right thing and expose what's going on — but is there any way to do so without Static getting snatched up himself? 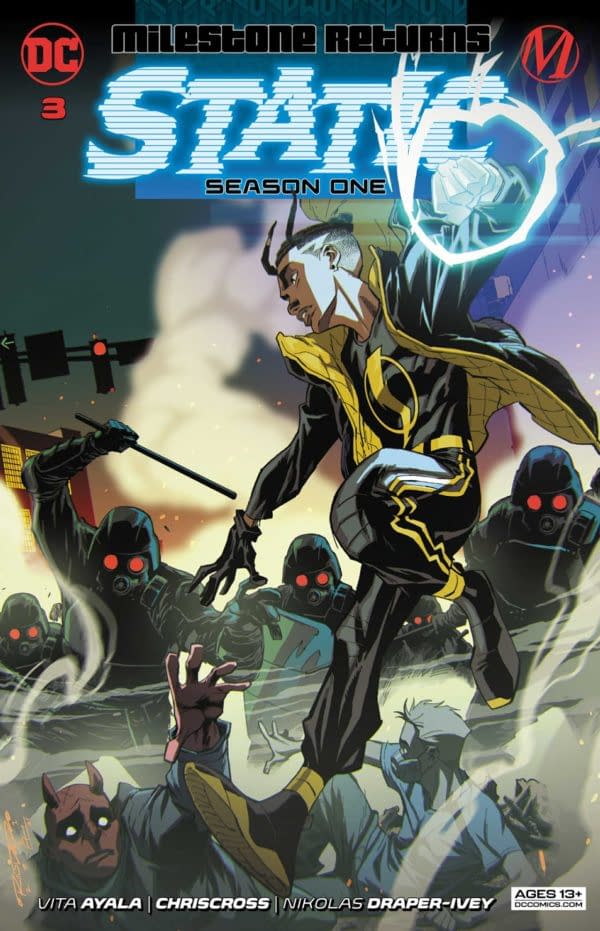 Review by Hannibal Tabu
8/10
Unexpected turns for problematic people, the forging of a hero from the seeds of greatness and an emotionally resonant experience make this issue a winner.
Credits
Editors
Chris Conroy, Marquis Draper